The Work before the Grind

Share All sharing options for: The Work before the Grind

Assuming that you’re trendy and with the times, you have most likely seen my comments on twitter (@Preine_PtR) or in various posts here on Pounding the Rock concerning the Spurs individual player practices prior to tip-off at the AT&T Center. Outside of a Spurs victory, the work put in prior to the game is my favorite time of game day. Pre-game practice is an orchestrated, and consistent, series of individual drills that focus on various parts of the game catered to the style and skills of each player on the team. Take the jump and I will take you through the basic motions of DeJuan Blair’s pre-game practice.

Nearly two hours before tip-off, Blair walks out onto the court with assistant coach Chip Engelland and an intern from the Spurs training staff. DeJuan will spend about five minutes directly underneath the basket, working on his layups, put-backs, and angles off the backboard. I cannot stress to you how casual Blair appears while he works on his shots deep inside the circle. Blair’s shooting touch is so soft that it appears almost lazy. In live speed, his floaters almost appear to leave his hands at waist level. Blair’s early work underneath the rim is just a warm-up and rhythm building in his most productive spot on the court. There are not many big men who have come into the league with as good or better positioning awareness underneath basket than DeJuan Blair.

After DeJuan completes his work down low, Coach Engelland partners with Blair and begins work on their first 2-on-1 drill with the intern defending. Normally, the first drill is a simple a screen-and-roll with Coach Engelland simulating the ball handler. The main goals of this drill are positioning and movement. The intern will only move with Coach Engelland for a little bit after the screen but normally returns to simulate the defender that remains or tries to recover on DeJuan’s movement. Coach Engelland passes the ball to Blair who then picks his method of attack; normally a floater or reverse layup. Blair occasionally works on his mid-range jumper during this drill but not nearly at the level he spent on it earlier in the season (from what I am told). The 2-on-1 continues for a few minutes from different spots on the side closest to the team’s bench. By the time drills ends, Blair has usually built up a solid sweat.

Coach Engelland and Blair will move to the free throw line for a set of free throws. I cannot tell you if there is a set amount of free throw attempts (or makes) that Blair goes through. When Blair, or any other player, is at the line practicing free throws, I tend to focus on the shooting mechanics. Blair’s free throw mechanics have gone through a noticeable change; a quick release shot-put motion to a smoother and more thorough shot. Overall, Blair’s shooting motion is still fairly quick but the slight adjustments causes the ball to travel more in an arc and less in a straight line. Blair still has plenty of work to do on his shooting mechanics, but it should be noted that the work both Blair and coach Engelland have put in has (at the time) resulted in a 12% increase in DeJuan’s free throw percentage from his rookie season (54.7% to 66.7%). After the set of free throws, the intern returns to the court to aid in the same 2-on-1 drill but this time on the opposite side of the basket. Once completed, DeJuan returns to the free throw line for another set of free throws. 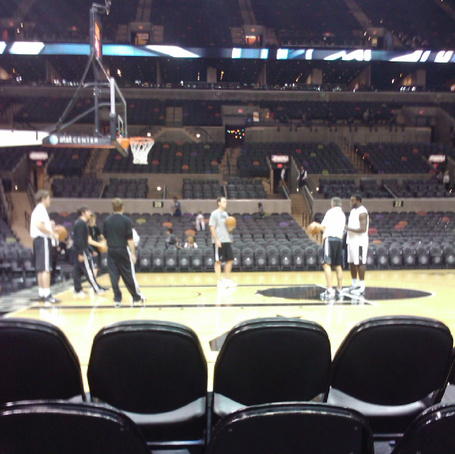 After the second set of free throws, Coach Engelland sets up a new 2-on-1 drill which focuses on driving last-second passes into the paint. Engelland will drive into the paint, drawing the intern off away from Blair who is positioning himself in the best spot to both receive a pass and put up shot. If the intern overreacts to the pass, Blair touch-passes the ball back to Coach Engelland for a layup. The primary focus on this drill is Blair’s movement and spacing. On a few occasions, I have seen a second intern join in on this drill to turn the focus on Blair’s attack at the basket. After a few solid minutes, Coach Engelland will have a short chat with Blair and send him to the free throw line for one last set. Afterwards, both Blair and Coach Engelland will migrate away from other people to have a short talk. Coach Engelland dominates these discussions. He gestures heavily with his hands but not enough to identify the topic of discussion. Blair will listen intently while sometimes drying of his face using the bottom of his shirt. After the final short talk, DeJuan always caps off his practices with the exact same dunk that was highlighted in the 2011 Rookie Challenge; an off-the-backboard one-hand slam. With that, Blair heads back to the locker room, stopping to sign a few autographs for early bird fans hanging out by the tunnel.

The whole pre-game practice is at a high level of focus and intensity. Each player has their own unique set of drills aimed at tackling the most important facets of their game. Pre-game proceeds like clockwork; Jefferson always works early with Coach Vaughn, Hill tackles the deep corners, Duncan always works with Coach Newman, and Manu always receives a small cheer from the fans. Every player always enters the court with a business-like focus on the game. No player leaves without a good sweat or without detailed feedback from the coaching staff. As a child, I was always told "practice like you plan to play." The coaching staff of the San Antonio Spurs seems to have that mantra engraved into the minds of each of their players.