The first time I heard the phrase "Ice for Dyess" was a couple of weeks ago. I was emailing one of the managers of Detroit Bad Boys (SBNations's blog for the Pistons) about trying to set up the Behind Enemy Lines post that SFS did with Mike Payne. I must admit that I utterly misunderstood. He graciously explained about the movement and I was completely enthralled by the idea. I had to thank him for letting me know about it.

What follows is my reply to him.

I had no knowledge, none whatsoever, that there was any "let's pull for McDyess to get a ring" faction amongst Detroit fans. I am both stunned and humbled. While that's one of the coolest things I've heard so far this year, I'm not sure how much actual rooting I'd be prepared to do if say, Tony Parker left a foundering Spurs team to play backup PG for a championship-contending Piston team in 2015.

Would I merely check boxscores, or would I watch highlights? If nothing was going on some random evening, would I tune in to a Detroit @ Washington game in early December, just to see if his second quarter stint would produce an opportunity for him to unleash his teardrop? Or would I start watching entire games while marveling at how much the new Motor City acquisition, Marcus Jordan, reminded me of his dad, even without the otherworldly hops. The answers to all of the above are at least "maybe", but the probability of each and every one of them decrease by no less than half, if Detroit had repeated at the expense of S.A. in '05.

Now I feel silly for having made light of this worthy cause with my Jacuzzi4McDyess comment. I had merely assumed that the Ice4McDyess was part of a training room regimen prescribed to help SAM (San Antonio McDyess) with his aching knees. Now I'm happy to know the story behind the phrase and will be on the lookout for it. 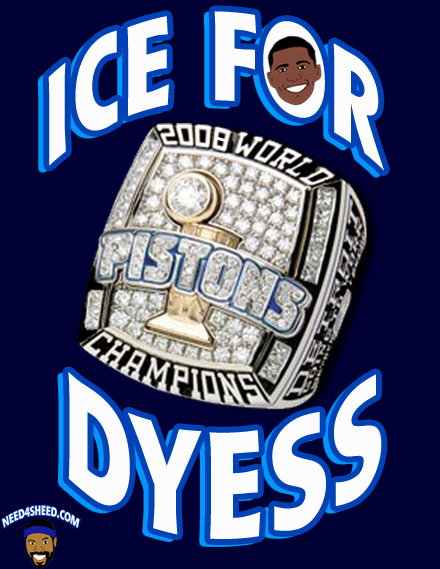