At Kings Recap: Tiago With No Regard For Human Life

Share All sharing options for: At Kings Recap: Tiago With No Regard For Human Life 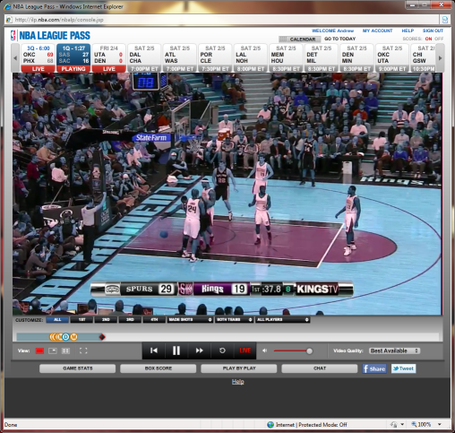 When given a choice of games to recap, I chose the Kings. It was a Friday, which meant that I might actually harness the fortitude to stay fully awake throughout a West coast game, and I would have my Saturday to write a lengthy recap. Well, you know what? This game didn't deserve a lengthy recap. It. Was. So. Boring. I should simply 'chop an image of Tiago bursting up through a pile of Kings players, and start up Black Ops. But PTR recap duty is like the Foreign Legion, so let's see how many ways I can think of to describe this utter annihilation of anything purple.

Much has been said about the recent Purple Surge. Wins against the lazy Lakers, the streaky Hornets and a close game against the powerhouse Celtics were enough to get everyone's attention. "We're really starting to believe." DeMarcus Cousins dixit. I wonder how much they believe after last night's game, in which the Spurs dismantled them in the first quarter and they hit the snooze button, let the minutes go by and when the time was right, threw Chris Quinn out there to add insult to injury.

The rookie Cousins was one of the biggest reasons for the Purple Surge. Having watched him play only a couple of times, he strikes me as a heavy-duty type player. Good rebounder, good balance that helps him to draw fouls and get to the rim despite the average athleticism, and a clever passer in the post. His shooting percentages almost blinded me, though, and last night he was dominated by the Spurs forwards.

Beyonds Cousins, the Kings are a series of tragedies. Tragedy #1: Beno. There are still stretches when he does something so brilliant that I almost start reminiscing about his black-and-white games, a zipping bounce pass on the fast break, a smooth cross-over, a sweet PUJIT as Ziller and jolly discussed. But then I see the lack of hustle, the long stretches of nothingness, the utter blandness of his game, and I remember it's all a trap. He will always be the MySpace wonder. Tragedy #2? Evans. Or more to the point, his MVP in the Rookie-vs-Sophomores game over Blair. What number could Blair put up if he was given free reign to shoot? Meanwhile, Evans practiced his matador defense against Tony, and seemed to believe screens were impenetrable force barriers.

And yet what really hurts me is Tragedy #3, Omri Casspi. How good would he be in the Spurs system? High-flying, lank, agile shooting forward that could've been part of the next generation Spurs that we can sometimes guess in that long, deep bench of ours. I was unashamedly in love with his game last season, but bad basketball breeds bad habits. It might never be, and all I will be left with is a bunch of a what-ifs - and Anderson.

We were better than this guys. All that was left was to prove it.

And Then We Won

The only doubts about the outcome of this game stemmed from its dreaded SEGABABA status and from the possible lackadaisical play after the previous night's emotional high. It wouldn't be beyond the Spurs we know the start the game slow and play down to their opponent's level. Quite the opposite, in fact. Behind Tony's penetration and RJ's shooting, the Spurs started on a 12-2 run that set the pace for the rest of the game. Evans and Udrih were unable to stay in front (or to the side) of our guards, and RJ's stroke has regained its first-20-games form. Hill joined in the fun, and even Splitter a minute later. With Manu at the helm, the bench finished the first quarter with a 7-1 run and started the second with a 15-3 run. 24-point lead, and that was it. Game over.

I'm left with a number of heart-warming impressions. There was an unlikely sequence of plays involving RJ that put a smile in my face. During a fast break with Tony, with the hoop wide open for a mind-blowing dunk, RJ finished instead with a boring no-flash layup. Then, on his end, he provided good defense and a beast-like rebound, threw a bad pass to a running Tony that was stolen, and then set his feet in an unsuccessful attempt to draw a charge. Later on, he fell to the ground after tripping on a cameramen and took down Casspi with him. The Kings player stood up without changing expressions. RJ laughed, laid down on the floor and brought a smile to the Kings fans around him. RJ 2.5, ladies and gentlemen.

I've said it before, I'll stay it again: Hill is Manu. Manu-like. Manuish. Manuminus. He's a guy who at this point I trust implicitly to do something positive for the team. Defense, offense, an important three or a drive to the basket. He's got the tools and, more importantly, he is able to use them in high-pressure situations, where points are difficult to come by. Wayne called him once "another guy that will make a play when you most need it", and he couldn't have been more right. And at the time, we still have the original Manu, to boot. Last night's rotation had him as the first started that went to the bench, and playing most of his minutes as the brain of the second unit. It's very similar to his role as a 6th-man-that-finishes-the-game, but with 5 minutes at the start of the game to punch first and punch hard.

I have to thank the Kings. They were so soft, Pop decided it was time to let the Tiago out. He didn't disappoint.

The Future Is Not Now, But Soon

I'm not a believer. Tiago is right now only a ridiculous-upside bench-warmer, who will be lucky if he gets a few minutes of playoffs time in the odd blowout. As soon as the River Parade is over, he needs to hit the gym, have some of those magical "supplements" I bet NBA players are fed regularly, and gain some 10 kilos (20 pounds, furriners) of muscle. He's easily pushed away from the basket on the offensive end of the floor, especially when he tries his hook shot. Then he needs to kidnap Chip and find a jumper within himself.

Yet games like last night's fill me with starry-eyed hope for the rose-tinted future. His foot movement and defensive BIQ are impressive, and when given the chance to shake off his initial offensive jitters, he can be efficient scorer (7-8 FG last night). What really excites me, though, is the possibility of someday seeing the Tiaglair. Or the Blaigo. The Spurs' two-headed monster, the 21st century version of the Twin Towers, veterans of a thousand battles and a 4-5 unit that's larger than the sum of its parts.

Can you see it? How they could complement each other? Tiago's height could cover the holes Blair's feisty but limited defense will leave, and Blair's quick hands will bother faster players and rack up the steals. Tiago's hook shows more promise than Blair's Bonner-like shyhook, but Blair will eventually be able to knock down those smooth jumpers he teases us with, and Tiago won't. DeJuan is a wonderful, gifted passer, and Tiago has good hands to grab them and finish the plays. (At one point last night, Blair's first pass was deflected, so he proceeded the _tap_ the contested ball hard away from Casspi and right into Tony's hands. Wow.) Blair rebounds, Tiago blocks. In my fantasies, long-range bank-shooter Blair will play away from the basket at the start of the play, like a mini-Duncan, versatile and passing out to cutting shooters, and Tiago will anchor our defense. A true 4, a true 5. And they will make all their FTs, and they will LOL and glitter and push us towards ring number 7, the last in Manu's long and glorious career. Sniff.

3rd. Manu. Sorry, RJ, but good things kept happening when this guy walked into the game. His mastery of the second unit was a sight to behold.

1st. Tony. I wanted to call him selfish, but somehow he has 7 assists. I hate stats. 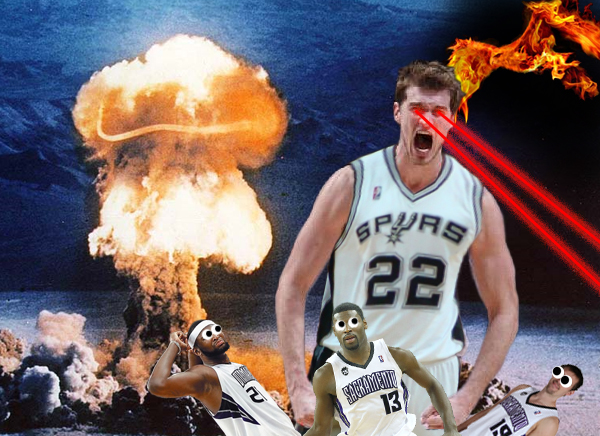