Share All sharing options for: Photos and story - Spurs Tux and Tennies fundraiser

As Manu said on Twitter afterwards: "this was super fun!" This year friends at Eagle Drilling Company, Will and Gloria Drash, invited me to sit at their table, allowing me access to the pre-dinner VIP reception, where guests and players mingle and exchange conversation freely. I've already teased you with the photo of me with Manu, so I'll start this with a photo of the party favor: a bottle of specially labeled "Black and Silver" red wine from Coach Popovich's winery in Oregon. 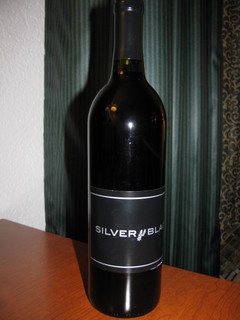 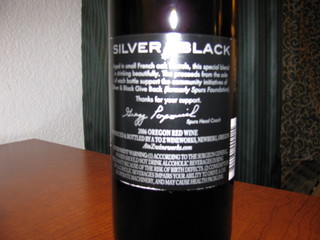 The theme of the dinner was Around the World With the Spurs. Food stations around the room featured cuisine from Argentina, Brazil, Virgin Islands, France, and Texas. A few of the 27 dishes available were beef with chimichurri sauce & empanadas (Arg), Brazilian gumbo & Feijoado - black beans with sausage (Brazil), jerk chicken, conch chowder & grilled shrimp (VI), escargot & pastries (Fr), and ribs, jalapeno chicken, sausage, and a cobbler bar (Tx). Each station featured decorations appropriate to that location:

Sand sculpture from the Virgin Islands table and Carnival theme from Brazil: 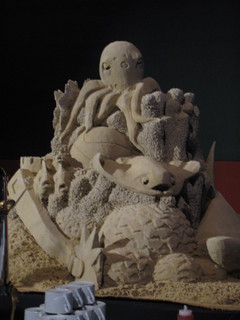 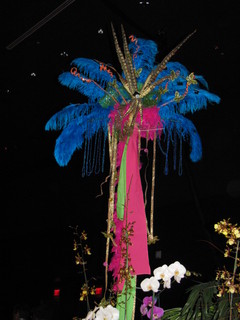 Eiffel Tower from France and ice sculpture obelisk modeled after the one in Buenos Aires: 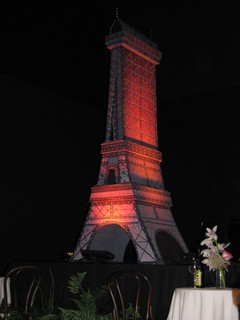 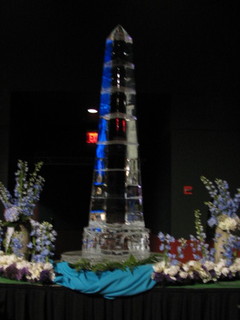 Alamo replica and floral arrangements in sneakers on each table (my table was Manu's sneaker - see the MG logo on the side): 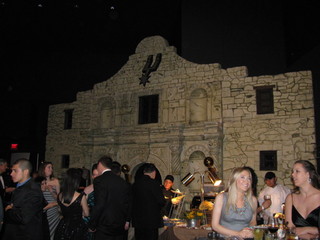 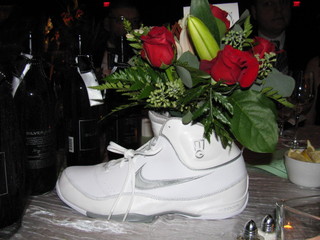 The big items up for bids were a skeet shooting trip for 8 on Peter Holt's ranch that also came with four club level seats to a Cowboys game (and more), a trip to Bimini for 6 plus a chance to star in an HEB commercial with the Big Three, a trip for 4 to Rio plus dinner with Coach Pop & Sean for 10 at Texas de Brazil, trip for 4 to the French Open tennis tournament, hunting excursion for 4 to a lodge in Argentina with gourmet meals/open bar for three days, and a four day vacation to anywhere in the continental US with flight on the Holt's private jet (which went for over $30,000). Other fun experiences offered included dinners with Manu, Tony, Tiago, a party at RC's house, golf with Gervin and Bonner/Jefferson, bowling/pizza party with Hill, suite for a Spurs game with a game of Knockout against DeJuan, courtside tickets to every home playoff game, and Rangers tickets. Local businesses donated jewelry, art, and other merchandise as well. In all, 150 smaller items were up for bids.

Sports memorabilia - shoes, photos, jerseys, etc. - from Spurs and other sports stars was a very popular category. The glass backboard that hung in the AT&T Center in 2003 and 2005, autographed by Tim, Tony, Manu, and Coach Pop, was included. Michael Beasley's jersey drew no bids. RC Buford bought a large framed photo of Manu from the 2004 Olympics (shirtless, celebrating the championship) with his jersey. I told Manu that the women in the crowd were passing a hat and when they got to $5,000 he would have to go up on stage and take off his shirt for us. He laughed and said, "Janie, that photo is seven years old - I don't look that good anymore." (yeah, right, Manu!).

Timmy's skeleton shoes were on the table - they ended up going for over $800. 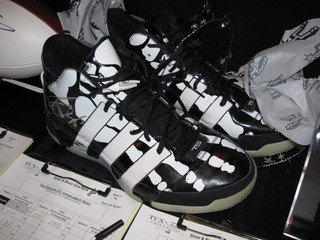 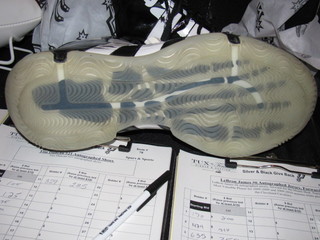 The program always features videos of some sort featuring the players. This year there were four featuring players talking about their country. George and DeJuan did a hilarious story shot in the country with a pickup truck and cowboy hats as they went looking for the elusive chupacabra. Tony tried to instruct various teammates in speaking French. Manu taught his teammates about Argentine culture: Rio is not in Argentina and the leading export is not goats. Tiago and teammates demonstrated the fine art of dancing the samba via a "bobblehead" big head video. Some of these will probably make YouTube (unlike the clip from a past dinner of Manu in blonde wig & evening gown lip-synching to "Don't Cry for Me Argentina, which he says is locked in a safe). 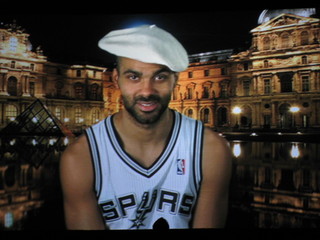 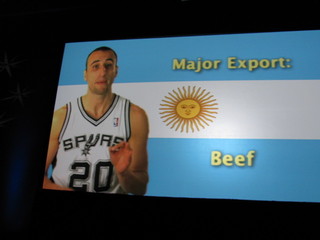 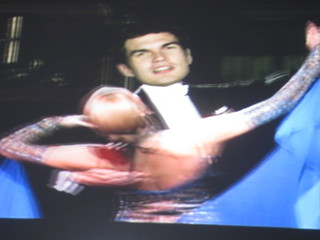 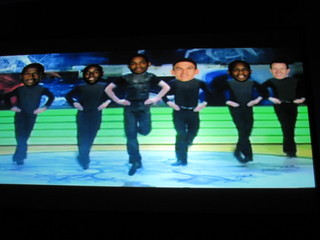 During the VIP reception I was able to actually talk with the coaches and players. Steve Novac and Chris Quinn arrived first. Since they are the "end of the bench" boys, not many people hung around to visit with them, so I had a nice conversation with both of them (Quinn's wife was there, too - baby due June 1). When Richard showed up without a date, the women in the room swarmed. DeJuan brought his aunt. I found out from talking with Tiago that Manu does not share the alfajores with his fellow South American. And I know I will be in trouble with the female Pounders if I don't include a photo of Sparkles all dressed up. 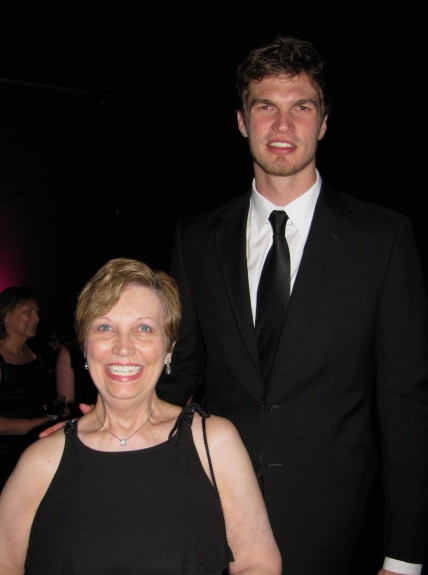 I won't bore you with all the photos of me with the guys, but these two are special. You can see the rest on Facebook at Tux and Tennies.

Tim actually does have a very nice smile! He thanked me for the All-Star salute poster. (The yellow wrist band was a necessary accessory to be admitted to the reception.) 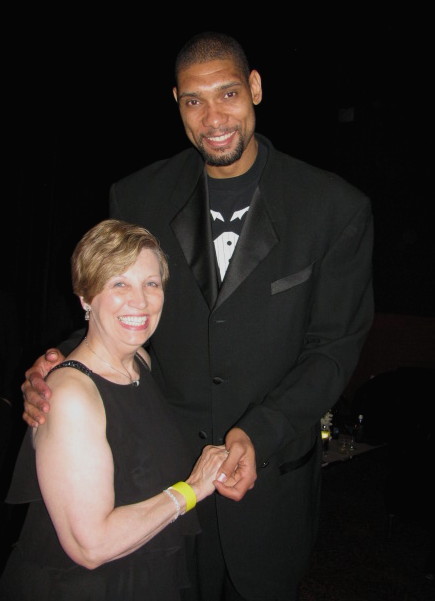 David had to bend almost double to get in the photo with me. He laughed when I told him I was the tallest kid in the room through the fifth grade. He stayed almost the entire evening and posed for photos with any and all. He also brought his two sons to the dinner. 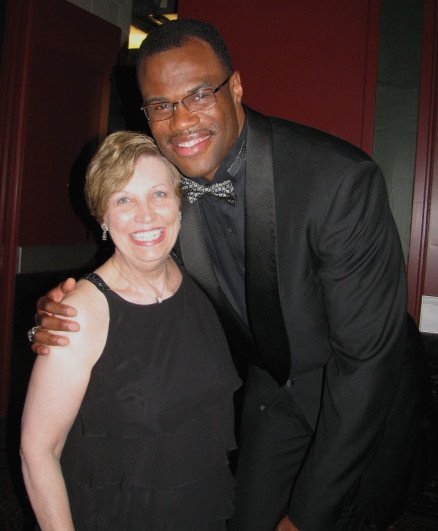