Photos - Spurs Bear Down Against the Grizzlies

Share All sharing options for: Photos - Spurs Bear Down Against the Grizzlies

To say this was a rough game is an understatement. There were lots of key plays, but one moment that stood out to me was seeing referee Tommy Nunez go down in the first half. With all the rough play that followed I kept thinking that maybe a third referee could have prevented some of it. But Manu rose to the occasion, as I am sure he will continue to do now that Tony is out for a while. 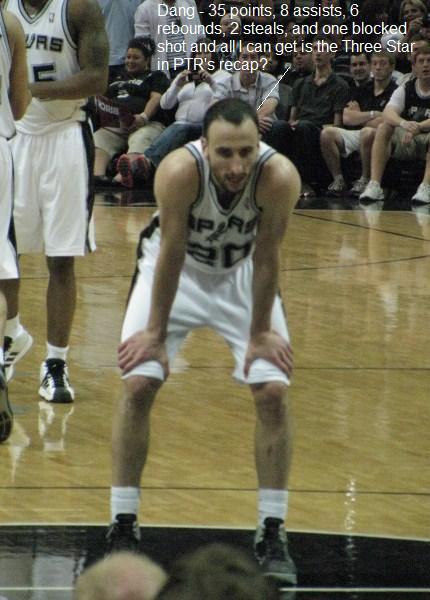 In the first quarter, Tim blocked three of Zach Randolph's shots in 4 seconds, DeJuan followed immediately with another one, and a fifth one missed it's mark. When the play was re-played on the big screen in the arena, the crowd counted each block and miss out loud, no prompting needed. Here's the first block by Tim: 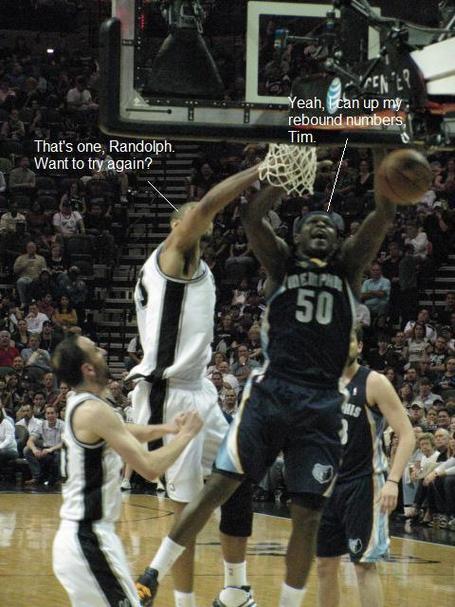 Manu was Manu - after the game, the Grizzlies Mike Conley had this to say about him:

"It's very difficult to guard someone like him because he's very good with his body, he's very good with his footwork," Conley said. "He's able to get his body in good positions to where he can draw fouls. You can get up on him, but you don't really want to get up on him cause he's going to draw the foul. You just try to contain him and get in front of him as much as you can." 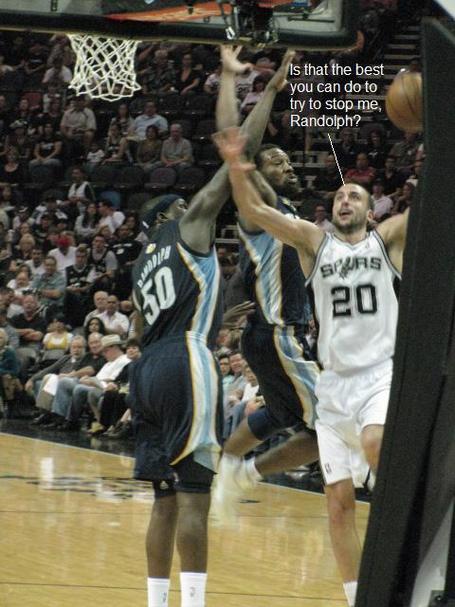 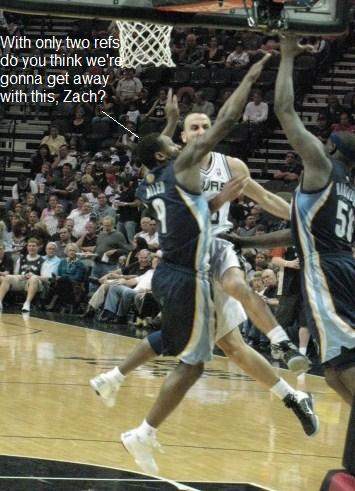 Of course, I can explain Manu's great play in the last two games: it's not alfajores this time, but a return to a good luck superstition I had near the end of last season. I get a Dos Equis (XX = 20) draft before the game and take a sip for every basket and free throw he scores. One beer is good for around 25 - 30 points, so I had to stretch it last night to cover his 35 points! Dos Equis really should consider making Manu their next "most interesting man in the world." 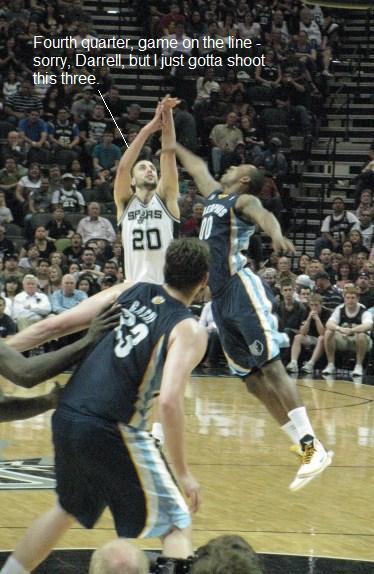 Of course, all that contact resulted in a few more bumps and bruises for Manu: 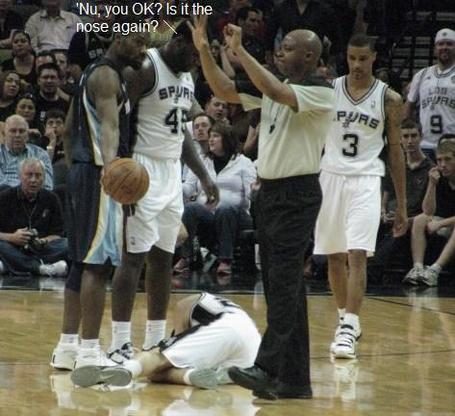 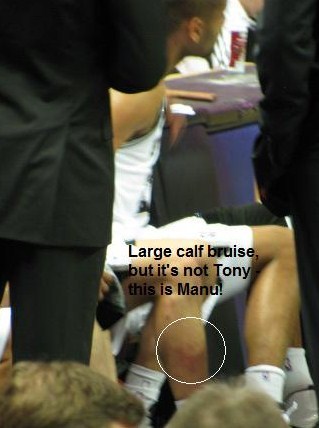 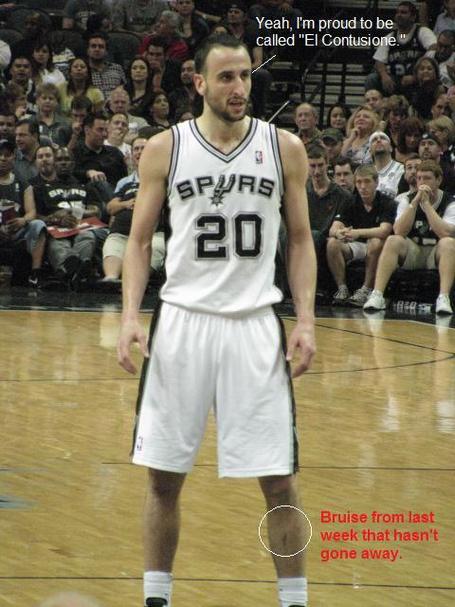 With only 26 seconds remaining, Jefferson came down with a crucial rebound (even though McDyess is credited with it in the play by play) and was fouled, sinking the free throws for a two-possession five point lead. I guess this is what earned him the second star in PTR's recap, huh? You can see in the photo how physical this game had become by this time. 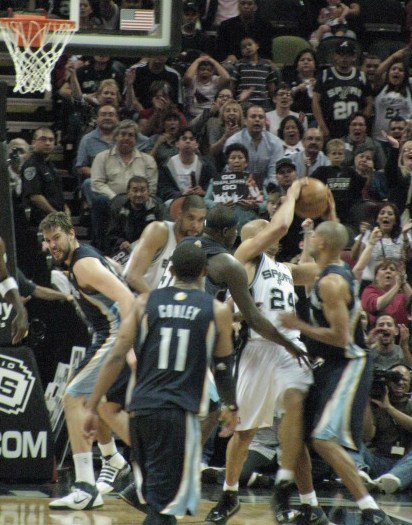 Timmy proved he could still challenge the young pups in the league, going to work against Marc Gasol in this pic: 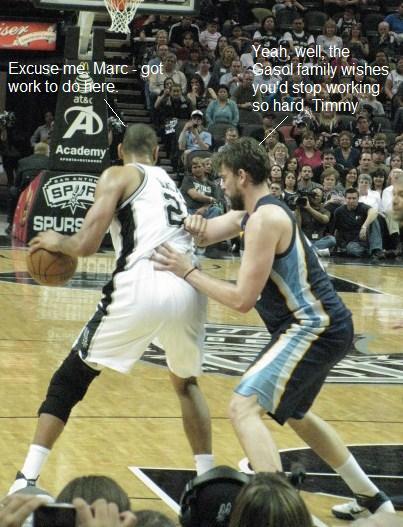 McDyess played eighteen minutes and grabbed 9 rebounds. Look closely in this photo and you will begin to realize how he grabs all those boards (no photoshop needed): 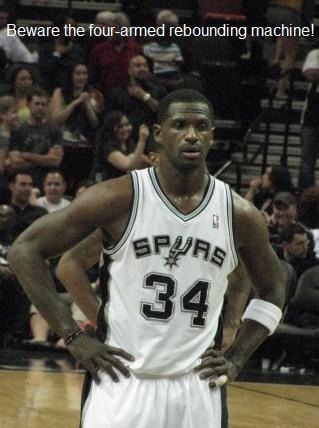 With 17 seconds to go, Tim had to in-bound the ball. He wanted to make sure he had enough room to keep the defender from grabbing the pass, so before he took the ball from the ref, he calmly bent down, moved the cup of beer belonging to a fan, and wriggled his way in between two front row fans for a better position. That's real veteran leadership! 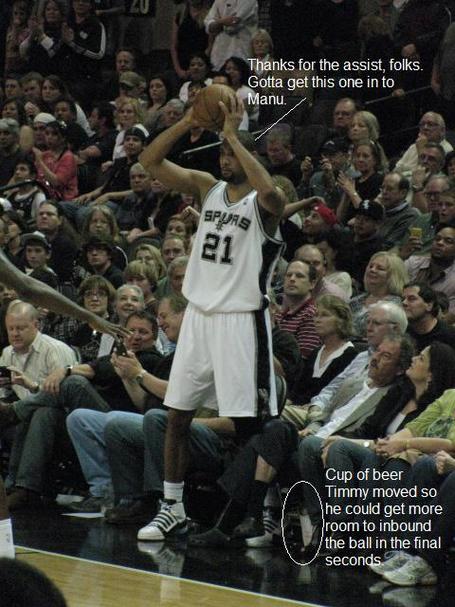