It has been argued that Spurs fans, and all NBA fans for that matter, don’t truly get excited until the playoffs are in sight. True or not, this season has been quite different than its predecessors. Breaking the mold of their traditional "slow start," the Spurs generated an early and energized buzz around town with a superb 46-10 record heading into the All-Star break, just four wins short of their total amount in the 09’-10’ season. Looking at nearly half a decade without a title and trying to enjoy every minute of the waning Tim Duncan era, Spurs fans are fired up more than ever - evidence of which could be seen last night when play resumed in the friendly confines of home.

It had been over a month since my last trip to the AT&T Center (33 days to be exact). Due to scheduling, I was unable to attend the final home stand before the long Rodeo Road Trip and say my farewells to the soon-to-be vagabonds. So I, soon followed by the remainder of San Antonio, waited impatiently as the Spurs darted all across the country testing their mettle. As usual, the All-Star weekend followed the road trip and further extended the gap between home games. I’m just happy that the NBA’s own stock show & rodeo was actually entertaining for once.

Due to the ongoing cleanup of the San Antonio Stock Show & Rodeo, my parking spot at the foot of the building wasn’t available for the game (Oh woe is me). After parking in an employee lot behind the barns – yes, the AT&T Center has a group of barns – I walked along the remnants of the stock show’s sale yards and holding pens. As bare as everything was, it seems like only time or a strong storm could completely clean up the mess outside. As I played hop scotch through the "remains," worries about the infamous post-rodeo smell began to grow. To my surprise, unlike several of the last , the AT&T Center was not burdened with the lingering aroma of the stock show & rodeo. Perhaps having almost three full days to clear the air helped. Or maybe, due to all the NBA drama over the past year, I’m just impervious to the smell of bull excrement.

The game day media and AT&T staff greeted each other, shared some stories, and went about their work, while the players and coaches executed their pre-game workouts with their customary high level of detail and focus. It felt as if every person never left the building but rather just hibernated in the hallways, waiting for the second act of the NBA season. Even with things returning to a state of normalcy, there was an electric charge of anticipation that seemed to float around the court. People were excited to be back home, back at work at the AT&T. Several players chatted with the early bird fans while others stayed out the court much longer than usual. James Anderson, in his first appearance after his second recall from the Austin Toros, put in some energetic minutes working with Coach Engelland and Gary Neal. Thinking about how long and frustrating this season has been for the Oklahoma State rookie, I can’t think of anyone who is more excited to start the final stretch of the regular season. The game’s early tip-off had fans fighting both schedules and traffic, leaving most of the arena empty in the final minutes leading up to the game. After I set up my work station in the mezzanine, I waited through the national anthem and player introductions. When the lights came back up, the AT&T Center was nearly packed and ready to rock.

It was evident early on that this game was going to be a physical one. Players on both teams were getting smacked in the face, knocked out of bounds, and regularly ending up on the floor. The fans’ grumbles and boos escalated after every call or "no-call." Likewise, their cheers intensified as the Spurs took over the game in the second quarter led by new fan favorite, Gary Neal. After four straight baskets by the Spurs, three of those at the rim, Nick Collison grabbed and tossed a driving Tony Parker to the ground. McDyess immediately got after Collison as the fans began screaming for blood. After the two were separated by both Durant and Duncan, the officials convened for what felt like an eternity. The boos rained in harder after each passing minute and hit like a flood when technical fouls were dealt to both Duncan and Durant – the peacemakers. San Antonio finished the half on a 14-2 run and the crowd noise grew after every score. The half didn’t end on a positive note as Gary Neal went down from an incidental Harden elbow to the face (Neal received 5 stitches during half time). Many fans were crying for an ejection of not only Harden, but also the officials. The officiating trio received a chorus of jeers and insults as they made their way into the tunnels.

The rest of the evening was just a crashing wave of energy. The Thunder won both of the quarters in the second half but with as loud as the crowd was you would have thought the Spurs were running away with it. Even when the Spurs couldn’t buy a basket for most of the fourth quarter and found themselves trailing, the fans stayed as loud as ever. Matt Bonner would later blow the roof off the place when he drained the Spurs’ 13th three-pointer of the night and gave the team a 3 point lead in the game’s final minutes. The Thunder managed to pull even with San Antonio one more time but would eventually become the Spurs’ 19th straight victim at the AT&T Center. 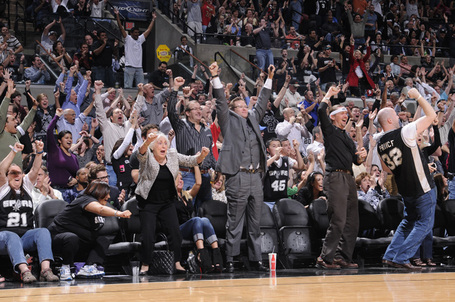