Photos: The Thunder Rumbles a Bit Before Being Silenced by the Spurs

Share All sharing options for: Photos: The Thunder Rumbles a Bit Before Being Silenced by the Spurs

Welcome home, Spurs! And in case any of you thought things were going to get any easier after the road trip, think again! That Thunder last night was a little bit scary and kept the crowd awake the whole game. 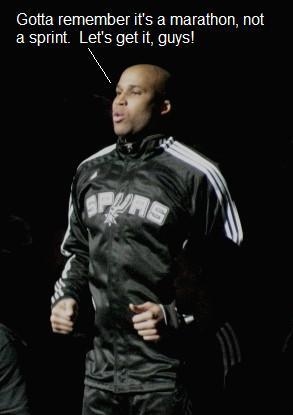 Since the Spurs weren't home when the All Star selections were announced, I had to delay the salute to Manu and Tim. Manu looked up and smiled, and later Tim actually smiled and waved our way as we held up the signs during warmups. Coach Pop actually looked up and smiled, too! Thanks to Hirschof for taking the photo. 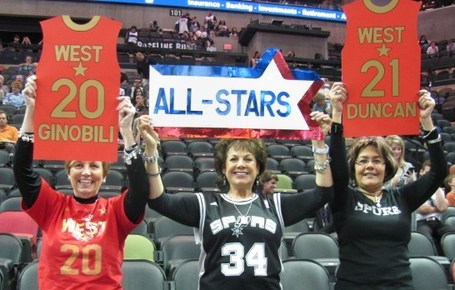 The Spurs really came to life after Collison's wrangling of Parker in the second quarter. As the refs huddled to figure out who would get called for what, the two teams circled around like they were getting ready for a rumble. In the end, it was Durant and Duncan who got the technicals, along with a flagrant for Collison. But for the Spurs, it was McDyess who jumped in quickly to defend his team mate, shoving anything in a blue uniform aside. 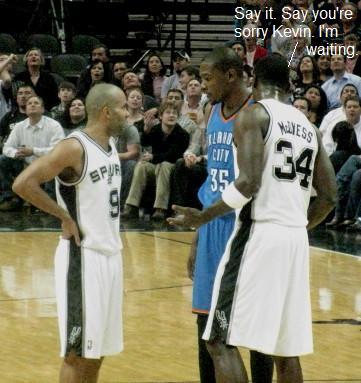 Richard Jefferson was given the primary responsibility of guarding Kevin Durant. Here's some photographic evidence of how close he stayed to Kevin, who still managed to tally 30 points. 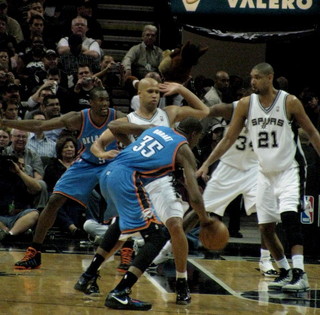 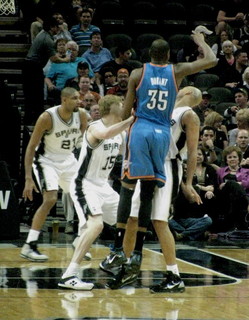 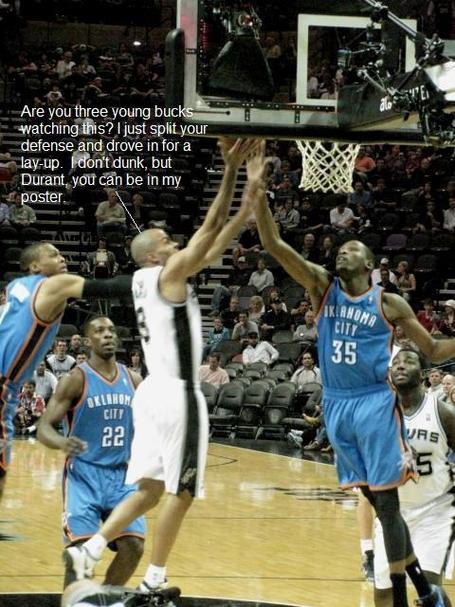 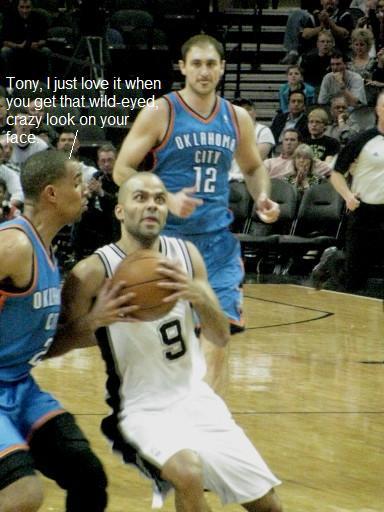 DeJuan thought he'd get in on some of Tony's style, too - 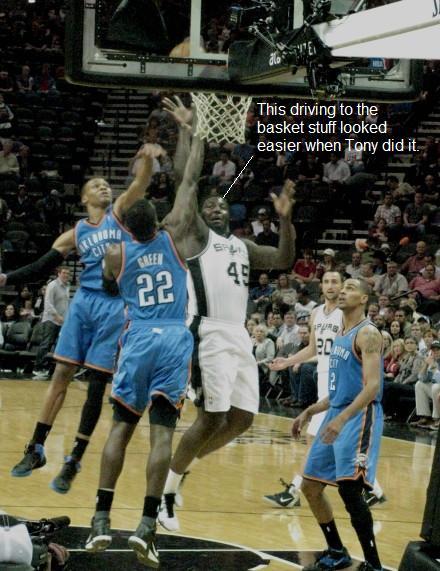 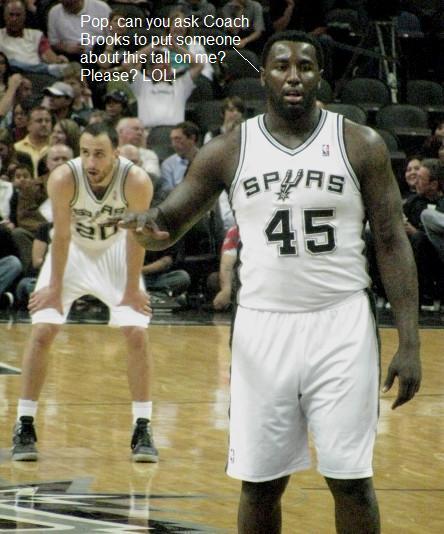 The Thunder's Serge Ibaka was still basking in the glow of the All Star Dunk Contest. 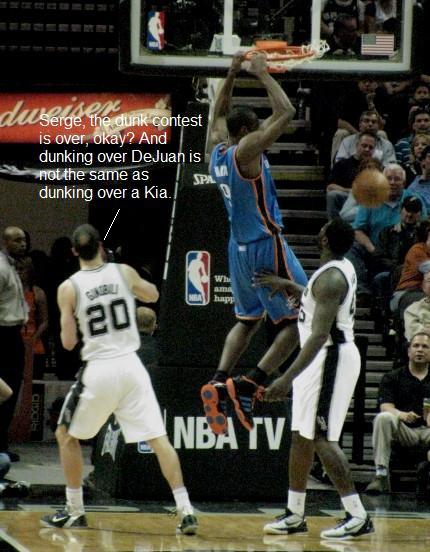 I'm not sure what caused this "glow" around Timmy - I think a dirty camera lens - but the effect is interesting! 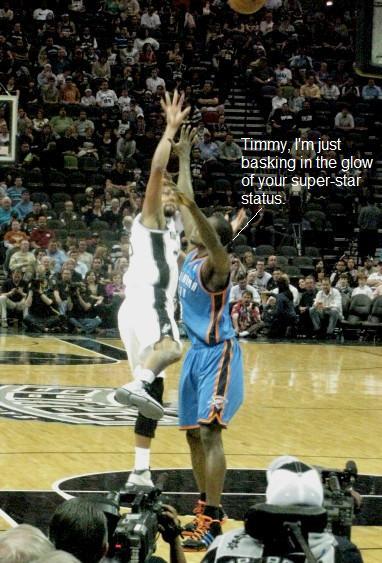 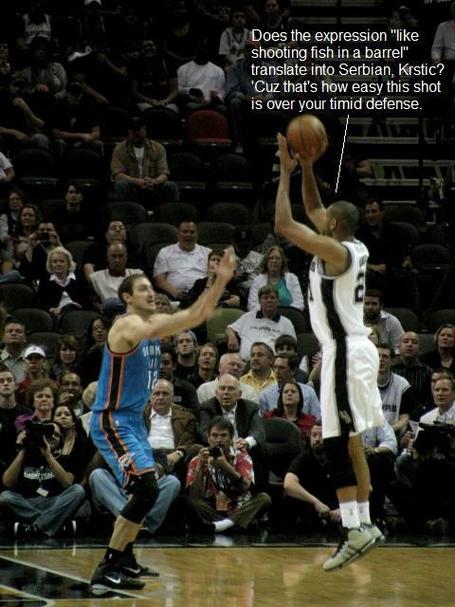 Manu - well, he's just not being Manu right now. I think it's a lot of little aches and pains, but he's not feeling his shot for sure. He does show up on defense and dropped those key free throws last night in the last few seconds. 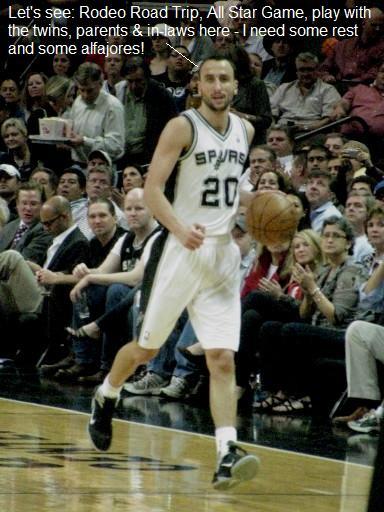 Late in the game, Manu handled the ball a lot. I don't have a snarky comment for this photo, but I just like it for the concentration it shows on the part of both players. How Manu can simulatenously keep his eyes on the defender while leaning back and dribbling behind his back is amazing. 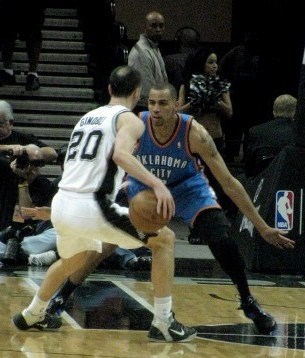 Gary Neal had an outstanding game and was named Impact Player of the Game. 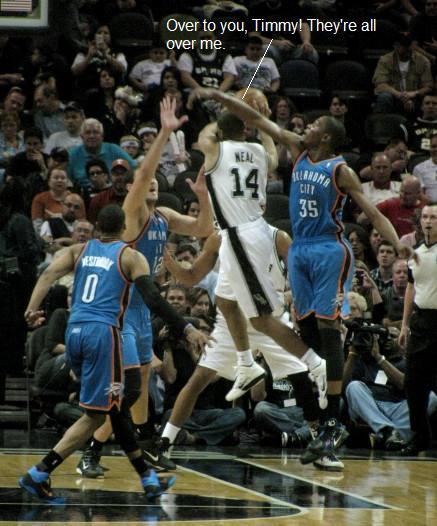 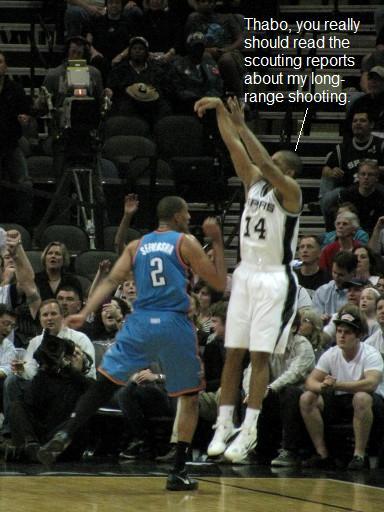 The final minute of the game took forever to play. I like this shot of the team in the final time out as Pop draws up a play - even the bench guys are listening intently. 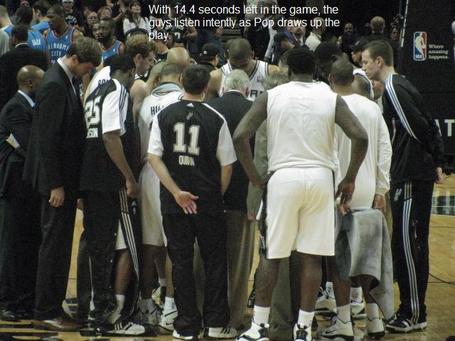 You can stop looking now if you don't like cute babies, romance, and good looking men wearing suits and ties. For the rest of you (guess that's us, girls), enjoy these pics:

Manu's twins came out for the last quarter. Many had plenty of help corraling them with his parents and her mother present. They still amaze me how they actually seem to pay attention to the game. 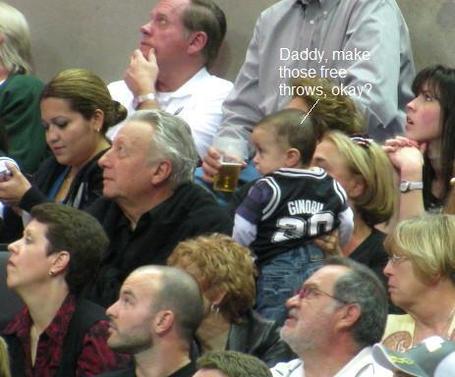 Gary Neal and his wife shared a little romantic moment on the court after the game - and don't get alarmed by the ice on his knees. I think that is probably standard practice for most of the guys at this stage of the season. 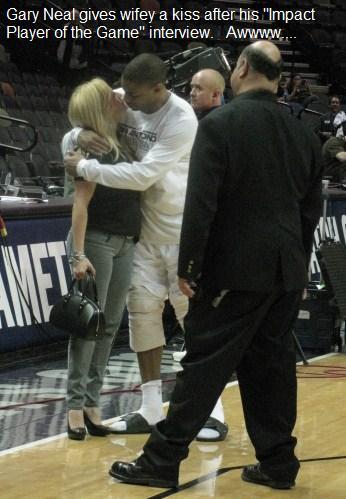 And finally, Tiago looked positively GQ in his suit and tie and new hair style (and took some good-natured ribbing before the game from "fashionista" Timmy!). BTW, I'll be going to the Tux and Tennies event on Saturday, camera in hand, to hopefully snag some pics of the rest of the guys "all cleaned up." 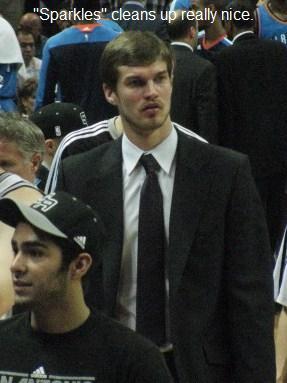