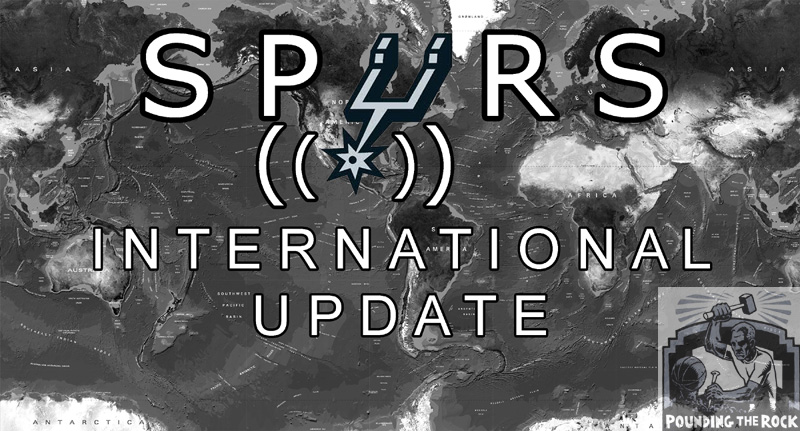 Well, folks, it's finally that time again. With the Spurs having a bit of downtime due to the All-Star break, it's time for us to overcome our hangovers Spurs withdrawals by taking a look at what's going on with some of our favorite Spurs-related players who aren't in San Antonio this season. We're also going to add another player in another locale to this one, and I'd love to hear suggestions on others to include.

Let's do a little globetrotting, after the jump.

This post is pretty long, so how about some tunes while you look through it?

That's right, even the league itself has a sponsorship.

The Euroleague is still the highest level of basketball competition you will find outside of the NBA, so let's start there. Since our last update, the Euroleage field has been narrowed to the top 16, and group play has begun in advance of the annual Euroleague postseason tournament. The format is a bit different than what we're used to so I'll explain it here.

Euroleague starts with 22 teams that have already qualified due to success in previous Euroleague seasons, or by winning the lower-level EuroChallenege. There are then two more teams that get in through a qualifying tournament before the season officially begins. The 24 teams are then broken up into 4 groups of 6, and the season officially begins. The regular season(which has already passed) consists of each team playing the others in it's group twice, and then having the field cut to the 16 best teams by record, who are then re-arranged into 4 groups once again, and play all the other teams in their new group twice. There are 6 games in this round, and at present, all the teams have played 4 of those games.

At the end of group play, the field will again be cut to the top 8 teams, and will be seeded and matched up in a format similar to the NBA's first round, except that it's the best of 5 games. The weird thing about this format is that, after playing a series in the quarterfinals, the Euroleague Final Four is a single-elimination tournament.

For a team that I thought had a lot of potential at the last update, these guys, ummmm, haven't lived up to it. At least they made it to the round of 16, but things haven't gone so well since then, as evidenced by their abysmal postseason record. Their Euroleague season will be over after 2 more games, unless something dramatic happens. They've had decidedly less trouble in the Adriatic league, where they are tied with Slovenian club Krka for first place. Let's check in on a couple of our Spurs training camp favorites.

James still has his strengths: rebounding, 3-point shooting, and defense. He's brought the turnovers down a bit from earlier in the season, but he's still got a lot of room for improvement. What I find remarkable is just how badly he has shot from inside the arc in Partizan's Euroleague games. Are the defenders that much better, or is James trying to force the issue? It's kind of puzzling, to tell the truth. I hope he can get himself figured out.

So, now we have a much better sample size for Curtis than we did last time, but the numbers aren't pretty. His 3-point shooting is turribul for a guard(especially in Europe), and his turnovers nearly outnumber his assists. However, I will praise him for being above average rebounding guard, and for getting to the line almost as often as Gist.

This club is historically one of the most dominant in Europe, and their games against crosstown rival Panathinaikos are among the most intense rivalries in all of sports. So, it should come as no surprise that both the big Greek clubs are doing very well thus far in the Euroleague, and that these guys are responsible for Panathinaikos's only loss up to this point in the Greek League, while being undefeated themselves. Let's check in with a couple of former Spurs, and a guy who has said he'd like to become a Spur.

Rasho is a monster in his limutes off the bench, and I still find it peculiar that anyone can shoot better from the field than they can from the FT line. Once a Spur, always a Spur, I guess. It's good to see Rasho doing so well, I always liked him.

Brontosaurus has been back in the starting lineup after nursing an early-season injury, and back to being devastatingly effective. An incredible rebounder at 7'2", who can shoot from anywhere on the floor, and play defense? Awesome, but they'll be without him for a while, and there are rumors that it's for disciplinary reasons, even though the press release says it's a broken finger. That might be a red flag, but there were similar rumors about Neal getting esentially kicked out of Treviso las year when he was sent to Malaga.

As I noted in the last international post, the Euroleague is much stricter than the NBA when it comes to awarding assists. For example, the NBA credits an assists when the receiving player dribbles once after the catch before shooting, and the Euroleague does not. It's basically catch-and-shoot, or it doesn't count as an assist. That lesson is just to demonstrate that Spanoulis is obviously the engine that drives Olympiacos, and quite possibly the best passer in Europe(shut up, Rubio).

In another part of Athens, the other side in the big Greek rivalry has been doing similarly well, but (as is typical) without having as big a payroll as Olympiacos. The only difference in records between these two powerhouses is the one game they've played against each other. Crazy, right? Anyway, let's check in with a long-forgoten Spurs' draft pick.

Euroleague teams have apparently scouted Sato sufficiently enough to force him into bad 3-point shooting, but he remains one of the best defensive players in Europe, and plays a pretty clean, solid game.

Anyone here still remember SpurNando? As in, De Colo? Yeah, he doesn't either. After showing a lot of potential over the last several years, Nando just hasn't gotten any better. One would think that the higher level of competition in Euroleague would have been good for him, but he actually seems to have regressed. In fact, one of his teammates is a Spurs draft pick that's more likely to see time on an NBA court, despite being much older. Oh, and Valencia isn't meeting the high expectations set by last year's EuroCup Championship, either.

Nando's three-point shot has abandoned him, as have his assist numbers from last year. But a high turnover rate still dogs him. It's going to take a remarkable turnaround for him to be considered NBA material. I don't doubt that the talent is there, but it seems like he just can't put it together.

Javtokas has become a very solid post player for Valencia, and there's not a whole lot to complain about. He should probably work on that assist-turnover ratio, but he's a big man, so that's not really expected of him. Or maybe I'm just being too mean to Nando, who knows?

Siena had an amazing regular season in the Euroleage, finishing a league-best 8-2 and posting a league-leading point differential as well. It looked as if they were running roughshod over all competition. Since then? Not so much. Their only 2 wins in the postseason have come against Partizan, who's been terrible(see above section on Partizan). There's still hope for them, though - they have a rematch against Efes Pilsen(who beat them by the slimmest of margins a month ago) this Thursday, and Siena may just have themselves a new weapon...

The last time we checked in, Malik was still rehabbing a back injury that cost him half the season(not to mention his first contract with Siena), and hadn't played a game. Now, he's back, and his numbers are pretty... mediocre. But, it's a small sample size, and he's probably had to shake off some rust. His last couple of games have been pretty strong, so hopefully the Malik we all know and love is back.

One step down from Euroleague, and part of the Euroleague organization, is the Eurocup. Here we'll find a couple of Spurs training camp cuts trying to make the grade.

Like the Euroleague, the Cup has two stages of round-robin style matches, with 8 of the 24 teams eliminated after each round. The only difference is that the teams are divided into 6 groups at the beginning of the season instead of 4, so there's only 6 games in the first stage.

A couple of Spurs' training camp cast-offs have found their home with this Israeli team: Jack McClinton (2009) and Tyler Wilkerson (2010). Neither of them seemed to be "over themselves", the way Pop likes his players to be, but at least they've found a place to play. Now, if only their team wasn't so bad. They're already disqualified from Eurocup, and there's no way they'll ever get past Tel Aviv in the Superleague playoffs.

Jack shot well while Gilboa was still alive in the EuroCup, and even better in 2 Euroleague qualifying tournament games, but he hasn't done so well(in a much larger sample size) from the Israeli Superleague.

Wilkerson seems to be evolving as the season wears on in Israel. He was shooting more 3's in the early going, and not rebounding much. Those trends have reversed over the last month and a half, so it seems as though Gilboa has been playing him in the post more often(to great effect), as his size isn't as much of an issue over there.

Bologna is not competing in any of the continent-wide leagues this year, probably due to financial reasons. I say "financial reasons" because they're ahead in the standings of teams that compete in both Euroleague(Lottomatica Roma) and Eurocup(Benetton Treviso), and because they won the EuroChallenge(third-tier European League) just two seasons ago, but that was followed by a sponsorship change, and they haven't competed in the larger leagues since. It's a pity, because they seem to have a decent team. Moving on... we'll find another Spurs draft pick here.

As a 6'8" combo forward, and at only 24 years old, Sanikidze has just the kind of attributes that many Spurs fans have craved for a while. His numbers are all better since the last time we checked on him, partly due to 3 monster games in the last month. I am, however, a little concerned about his status after finding out he only played 13 minutes on Sunday, and wasn't in foul trouble. I hope he's not hurt again.

Now let's head down under to meet with a training camp favorite from the Spurs' current season. SRF might be glad that we're covering his league, but I doubt he'll like to hear any more about the standings. Unlike the European system, there's only one league that the important teams play in down under, the NBL.

Ironically, the one National Basketball League team not based in Australia is running away with the league at the moment. The Breakers feature a shooter who had no real chance in training camp, if only because a guy named Gary Neal was there with a guaranteed contract. It's a pity, really - the guy is an incredible scoring guard, but the Spurs just didn't need any more of those.

If I had to pick on something, it would have to be the assist-turnover ratio. But look at that scoring, especially from long range. The guy can shoot, as proven this past Sunday, when he pasted 35 on the Gold Coast Blaze. Just a phenomenal scorer, who hopefully will find his way into the NBA some day.