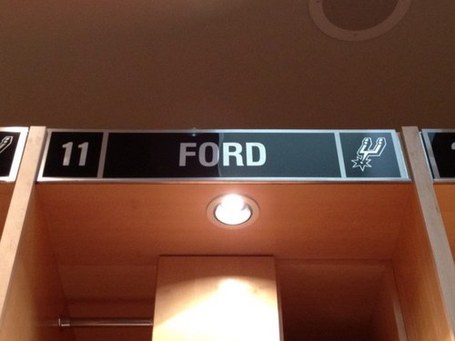 So, in the wake of all the "Chris Paul to Los Angeles Lakers" rumors/confirmation by sources/cancellation by Marxist (NTTAWWT) David Stern, topped off by the disappointment of not getting, you know, any of the major free agents we pined for (looking at you, Shane Battier and Caron Butler), and I suppose it's easy to neglect that PATFO once again did something oh so right. I'm talking about the acquisition of TJ Ford. I don't think he was on anyone's radar prior to this happening. While we were all focused on getting a great SF or a backup big, they quickly took care of a slightly less urgent, but still important need: the backup point guard position. Last year, we tried Hill, Neal, Manu and Quinn, none of whom had great success at running an offense. Hill and Neal could both light it up, but weren't so great at setting up others. Manu is, was, and forever will be Manu. But we're not here to talk about Quinn et all, we're here to talk about TJ Ford- so, without any further ado, let's do it: 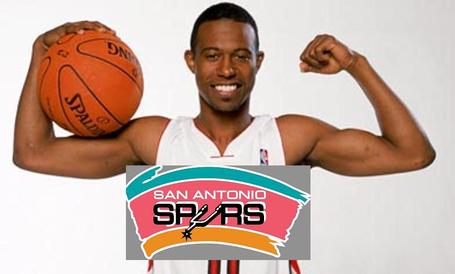 TJ Ford! Ok, he's no Chris Paul, but as far as backup point guards go, he's arguably the best one on the market. He's fresh off a stint playing for the Indiana Pacers, and you go here to see everything Indy Cornrows, SBNation's blog that covers the Pacers, had to say about him after last season. Or, just see the highlights below.

Despite a solid scoring touch in past years, Ford focused his game more defensively and as more of a playmaker for his teammates, a role he achieved to solid success, including big plays in Indiana’s surprising win against the Heat. Unfortunately, as the season progressed, so did Ford’s willingness to make plays. It wasn’t always pretty; overdribbling on penetrating drives and getting trapped with no logical option was something of a norm, but defensively, he provided a more stout option to Collison’s early season struggles.

What does this mean for the Spurs? Well, I don't know if you've noticed, but one thing our bench does pretty well is score, especially from the three point line. And while TJ can't fill it up from distance (he's a career 29% 3pt shooter) one thing he does exceptionally well is penetrate. It's been nearly 8 months since the Spurs played, so you may not remember that far back, but our second unit consists almost entirely of three point shooters (Gary Neal, Matt Bonner, Steve Novak, James Anderson) and players who are very good at finding space around the basket for easy dump off passes or offensive rebounds off missed layups (Dejuan Blair, Tiago Splitter).

Ford’s play sparked Indiana on occasion early in the season, but as it grinded on, so to did Ford’s overall play. It became more and more obvious that Ford was not the option Indiana needed for a second unit that had considerable trouble scoring the basketball given his inefficiency scoring the ball.

So, here's what I'm thinking. Remember that one season Manu and Tim both missed a lot of time, and most games our best players were Tony Parker and Roger Mason Junior? The two of them had career years, because Tony would drive and kick to RoMaJu, over and over again. Get ready to see our bench unit doing much of the same. TJ drives, and kicks to Neal for 3. TJ drives, and kicks to Bonner at the top of the key...who catches the defense closing hard, penetrates and lobs a nice shyhook for 2 ... or maybe he has time to shoot his 3 after all -- you know, like he usually does in the regular season.

Ford played smart at times this year. He seemed to play his best when he wasn’t in a groove, that is to say, when he wasn’t expecting himself to make plays for the team. He upped his assists, played better defense, and worked to put the team in a positive position. But Ford’s play on the court was certainly overshadowed by his professionalism off. Ford handled his demotions throughout the season with solid stripes, even giving himself a wonderful redemption story in the team’s playoff run.

I don't think scoring inefficiency is going to be a problem in San Antonio. Popovich has always wanted gunners on his bench who weren't afraid of taking big shots when necessary. He'd rather see an aggressive player go 0-10 than a passive one go 2-5 (hence the reason Richard Jefferson is widely speculated to be gone). That's not to say that Pop would want TJ to jack up all sorts of crazy trick shots, or unnecessary contested jumpers. Nor do I think Ford is going to feel too much pressure to make plays for the Spurs. In Indiana, he was one of the only veterans. On the Spurs, he's surrounded by seasoned professionals to help keep the pressure off him.

To sum up, as long as TJ can still drive and play decent defense, I like our bench's chances of being successful. And last year showed us that we can win games when our starters have an off night, but if our our bench is struggling then the situation becomes pretty near to hopeless. Am I saying that a diminutive poing guard who was sitting the bench through much of last season is the answer to all our problems? Absolutely not. Am I saying that we no longer need a big or a starting SF? Please! But Ford should make our team significantly better. Signing him was not a home run, but with him leading the bench unit, they should always be in scoring position.

I'll leave you with some words that Tom Lewis, the head of Indy Cornrows, had to say while looking back on Ford's tenure in the Hoosier state:

It is tough to do TJ justice in reviewing his time with the Pacers because he was such a bad fit with Jim O'Brien as coach. O'Brien emphasized a fast pace and three-point shooting but TJ is not a good perimeter shooter. His best game is working the ball into the lane to make plays off the dribble with a pass or shot. Having said that the results are often a mixed bag, but in a role off the bench could be a good change of pace and a player that is capable of getting on a roll and creating offense. Again, mixed bag and streaky, but shouldn't be overlooked. Consistency is his issue.