Josh Howard, Caron Butler, to meet with Spurs on Tuesday

Share All sharing options for: Josh Howard, Caron Butler, to meet with Spurs on Tuesday 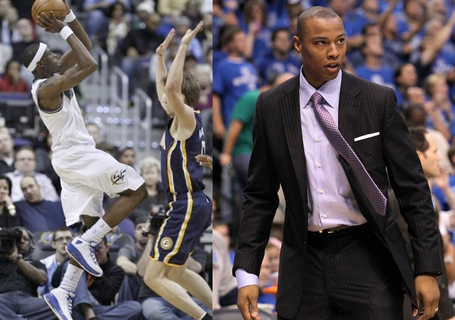 As per ProjectSpurs, Caron Butler and Josh Howard are both planning to visit the San Antonio Spurs on Tuesday, December 6. This information comes as David Aldridge of TNT tweeted, "Caron Butler itinerary: CHI Mon, LAC Mon night/Tue, SAS Tue, NJ Wed, DET Thursday if he hasn't made up his mind yet..."

Butler, a Forward, and winner of an NBA title with the 2010 Dallas Mavericks, averaged 15 pts, 4 rebounds, and 43% from the 3-PT line. Butler missed the last half of the 2010 season after having surgery on a patella tear in early January 2010.

On another spectrum, Michael Lee, of the Washington Post, tweeted, "Busy week for Josh Howard: He will visit SAS on Tues. Plans to visit CHI, NJN & #wizards, though the dates haven't been set"

Howard, a stretch 2-3 Forward averaged 11 points, 3.7 rebounds, and 39% FG, with his limited stint with the Washington Wizards from 2009-2010. Howard missed the final stretch of the 2010 season after having surgery on a reported ACL tear.