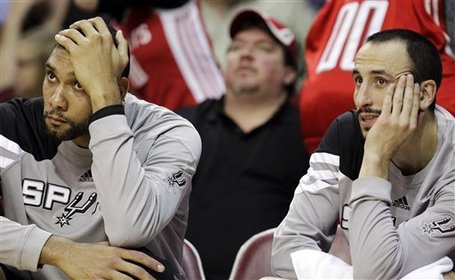 In the first of several second games of a back-to-back, the San Antonio Spurs failed in their early test, yielding to the Houston Rockets playing their season home opener at the Toyota Center in Houston, Texas. The Rockets jumped off to a fast start early on with Luis Scola and Kevin Martin leading the way, but the Spurs managed to crawl back with the help of its second unit. However, Houston's starters returned in the second quarter to put together a searing 17-2 run, which ultimately decided the ball game.

Let's keep it short, shall we? (plus I have a horrible throat infection that doesn't do my brain any good) 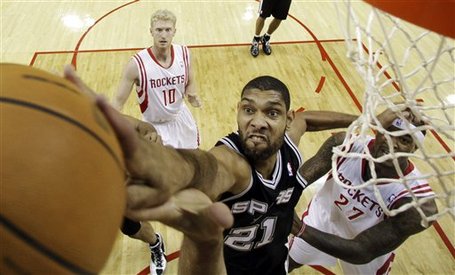 Before the game started, I was really liking the Spurs' chances despite this being a hated SEGABABA. The reasons for this are that: 1) San Antonio had a relatively easy time handling the much-ballyhooed Los Angeles Clippers the night before, thus providing more rest to the starters; and 2) in a shortened season where everything looks sloppy and disorganized as hell, continuity and familiarity reign king.

I was going through a list in my head of which teams other than the Spurs have had a strong start because of minimal roster changes. You've got, of course, the Miami Heat. They added a few important pieces but have relatively kept the same core that reached the Finals. And then you have the trendy pick to win the West this year, the grown-up Oklahoma City Thunder. In the East, I've seen the Atlanta Hawks win their first two games without breaking a sweat. All of these teams remain undefeated although it's still too early to tell who can keep up the pace.

On the other side of the spectrum, you have teams -- both good and bad a season ago -- who went through a lot of roster changes. Three or four games in, you've got the Dallas Mavericks, Memphis Grizzlies and Boston Celtics winless, while the Lakers dropped their first two assignments before finally getting back their bearings. The jury is still out on these teams in the long haul, but for now perhaps we can point to the lack of a proper training camp and time together as reasons for the slow start. The Mavs will probably use "championship hangover" as an excuse but we've come to expect that from newly-minted champs (I just choked on my snack as I typed that).

I thought those were all the teams I needed to think about until the Houston Rockets punched us in the mouth and never let us to get back up. Despite the Spurs-Rockets Texas rivalry never picking up on the same intensity as battles between the Spurs and Mavericks, there's so much familiarity with each other that during these games, you can pretty much throw statistics out the window.

A lot of scribes have penciled the Rockets as a fringe playoff team at best. For the last several years, the team has been stuck in neutral, not always sure if it can win enough games to secure a playoff spot, or whether they'll have to settle for a mid-teens draft pick where studs are exponentially tougher to find, even with Daryl Morey and staff's statistical sophistication. 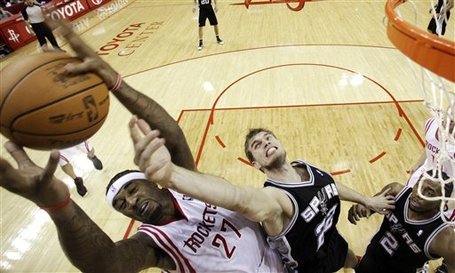 But as I was expecting another tough game, the Rockets blindsided me. Or maybe, the Spurs were the ones who did the sneak attack on its fans by showing how much older it got in a year. These ideas could be subject to debate for as far as the young season is concerned. Does Sam Dalembert finally give Houston that paint presence to cover for the defensive deficiencies of Scola, and the former lack of ceiling of Chuck Hayes? Dalembert either erased or changed numerous Spurs shots in the paint, and made Tim Duncan look very, very ordinary and -- dare I say it -- very old. Among the Spurs, Duncan had the most shots swatted at 3.

Still, it wasn't just Dalembert who contributed. The Rockets remain a rag-tag bunch of scorers and athletes that are capable of pestering every opponent they face. Kevin Martin seemed to get off whatever shot he wanted. Even when Clyde Drexler and other Rockets fans have started early with the Kyle-Lowry-for-All-Star lobbying, Lowry looked like he heard the support, went out there and quietly registered a near triple-double (16 points, 9 rebounds, 8 assists). Oh, and he also drained a three-pointer from about 3 or 4 feet behind the line with the shot clock about to expire. Yep, it was just that kind of day for the Rockets.

For the Spurs, should we start expecting some Jekyll and Hyde games already? The starters looked lazy and out of control for the most part, and allowed the Rockets to continually strip them of the basketball. Particularly annoying was how someone drove into the paint, brought the ball down at or below the waistline, then got stripped. There were several of those plays in the second quarter that spelled the team's doom. Team defense also left some head-scratchers, as the Spurs kept on collapsing in the Rockets' drives, leaving their shooters with all day to let it fly. Our defense essentially told Martin, "Here, get out of your slump and get your shot back."

As we watched the Spurs eat Rocket-dust in the 1st half, the 2nd half reminded me of the beauty and madness of Gregg Popovich's coaching. I can't remember for the life of me when it last happened that Tim Duncan did not start the second half. Pop also went with Kawhi Leonard, thinking (I guess) that if Richard Jefferson's shot isn't there then it's just better to go with defense. If we can't score, we won't let them score either. (Of course, that's not quite what happened after.)

Pop was at his confounding best and instead of giving us answers, I had more questions after the game. Did Timmy decline another notch after another season, given how awful he looked against Dalembert? Or was it just another ploy to save Duncan for the long haul? Why does Pop continue to let Bonner, scared off by his defender from launching a three, drive into the paint without purpose? Why didn't he let James Anderson initiate some of the pick-and-roll offense? Why did he opt to collapse on paint drives knowing the Rockets had great outside shooters and clearly were on fire from beyond? I'm no coach and absolutely not in a position to say what needs to be done, but those are my observations.

Like any other loss, we can still look at silver linings, which leads me to my three stars (decided with no little difficulty):

3 - Kawhi Leonard -- He got his "welcome to the NBA" kit courtesy of Kevin Martin on several possessions. Maybe Stampler could be into something when he says that Leonard doesn't have much use offensively. Still, the kid is energetic and it's very easy to root for one of the most active guys on the floor. Hopefully he continues to develop and settle down. As a bonus, here's David Thorpe from ESPN's take on Leonard:

Leonard has earned early playing time thanks to his natural feel for the game; he always seems to know where to be on the court. His decision-making, however, is another story. Shooting early-in-the-clock 3s, not swinging the ball to Matt Bonner for the 3 and shooting it himself, or hanging on the perimeter when he has a lane to cut to the rim for a dunk -- all mistakes, but correctable ones that will show up on film study. On a positive note, his length on defense translated to some nice steals as a helper and his huge hands cradled rebounds in traffic.

2 - DeJuan Blair -- Even if he's a whopping team-worst minus-29, I like the more active and relentless version of Blair who just happily throws his weight around. His defense still leaves a lot to be desired.

1 - Tiago Splitter -- Now that I've gotten a chance to watch a full game from him this season, I can understand the early love for Tiago. I was particularly impressed of how confident he was making difficult passes --he's quite adept at bounce passes -- and also interior passing where he recognizes when defenses are about to collapse on him and he shovels it to Blair or a cutter. Splitter also showed some toughness inside, crashing the boards for 4 offensive rebounds and blocking a shot.

The Utah Jazz are next, so let's hope the silver and black can get back to their winning ways.