Return to the Fortress of Basketball

Share All sharing options for: Return to the Fortress of Basketball

Hey! How's it going? Some of you may remember me from last season. I carried last season's burden of attending Spurs home games and writing about the fun I had. Sad, right? Well, due to new/additional responsibilities at work, volunteering as a teacher, and my first house, I just don't have the time to scuttle down to the ol' AT&T Center for some pink chicken and Manu Magic anymore. Plus, Mrs. Preine actually enjoys having me around. Fancy that.

Your new guide to inside the Spurs World, Scrappy Doo (one heck of a writer), was unable to make it to the Clippers beat down the other night, so the boss man asked if I, while on holiday vacation, would fill in.

Pleasant surprises are what the holidays entail for most people. A magnificent gift here, an unexpected visit there. Before I continue I'd like to thank J.R. Wilco for providing me this opportunity once again. I consider it the last Christmas gift of the year. Once my normal schedule resumes, I'm not sure when I will be able to make it back to standing within choking reach of a cantankerous Coach Popovich.

Writer's note: I didn't have much of plan going in to Wednesday's game so I fell back on an old one I never fulfilled - the visual perspective of a sports journalist. Enjoy.

My favorite part of the night is the pre-game workouts. I enjoy watching each player's unique workouts with both the assistant coaches and trainers. While the overall routine may remain the same, each night presents a slight adjustment. One night Duncan might be focusing on contested jumpers, the next night on footwork in the post. I always find myself anxious to see how this specialization fits into the game later. When you sit baseline during the workouts, you're able to see all of the tiny human elements that fit into the components of the Spurs machine. You can hear the curses of frustration, the audible notes the players make to themselves, and watch the swagger of a great practice. Last year, I remember watching Coach Engelland stopping a frustrated Gary Neal getting ready to walk off the court. Neal had been shooting poorly that practice and was missing nearly everything way off to the right. Coach Engelland is typically very expressive with his instructions, making it easy to decipher the current lesson. This time, however, Coach kept his hands low while practically standing inside Gary's ear. After a few minutes, Coach Engelland patted Neal on the back of the head and turned his attention to Tiago Splitter. That night, Gary hit four of five shots from deep to help lead the Spurs to a 109-105 victory over the Oklahoma City Thunder. 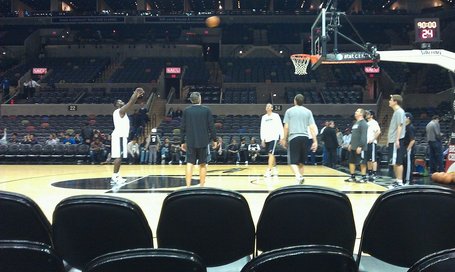 I also get to spend time during the pre-game talking to some of the regulars at Spurs games. First and foremost, PtR's very own janieannie (always a pleasure talking to both you and your friends, JA) followed by #1 Spurs fans, Will and Gloria Drash. Will gave me fist bump while I was heading towards the locker rooms... the man wears two championship rings on each hand. It's pretty sweet (Just saying...)

In the media realm, you have to start with our internet blood brothers at 48 Minutes of Hell and Project Spurs. I haven't been involved in this all that long but I've never met a more dedicated group of writers and sports fans. It is also a pleasure to sit and talk with some of the more established names in the San Antonio sports media; like Mike Monroe, Tim Griffin, and Richard Oliver (didn't get the chance to say hello this time).

Below are pictures of the media at work. Coach Pop would argue on the word "work." 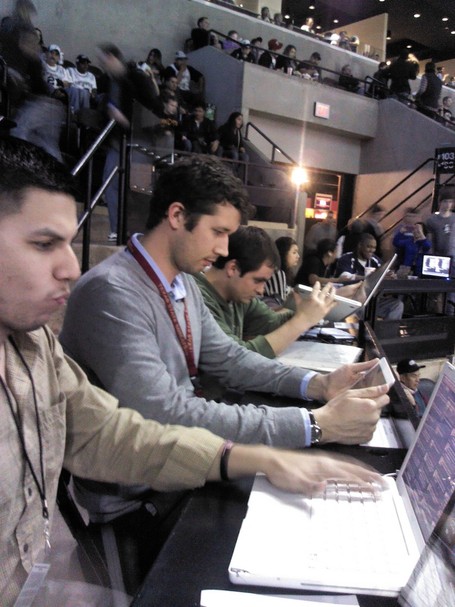 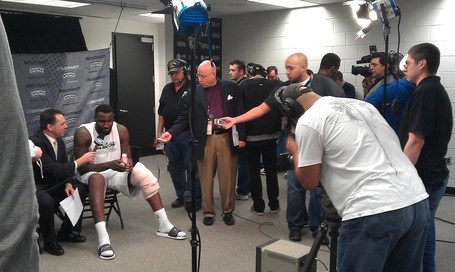 Media minions in the background 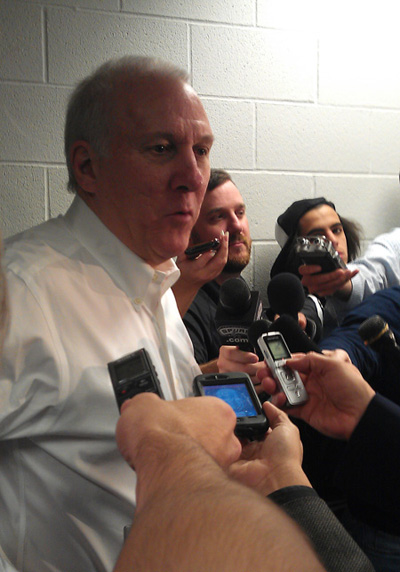 Pop sometimes has a hard time believing more than half of the room is employed.

After the post-game interview with Manu Ginobili, the media gathered around Blair's locker while the Pitt legend changed into his street clothes. Despite entering his third season in the NBA, it has to be a bit unsettling to get dressed with a large crowd of people holding cameras, lights, and recorders standing less than two feet away. As Blair was finishing up, Tim Duncan appeared from the back, drawing all of the media from Blair's locker to himself. DeJuan started laughing, grabbed at his personal items, and jogged towards the hallway. "Thanks, Tim!" So how did Blair end up in the picture you see below? The Beast forgot his cell phone. 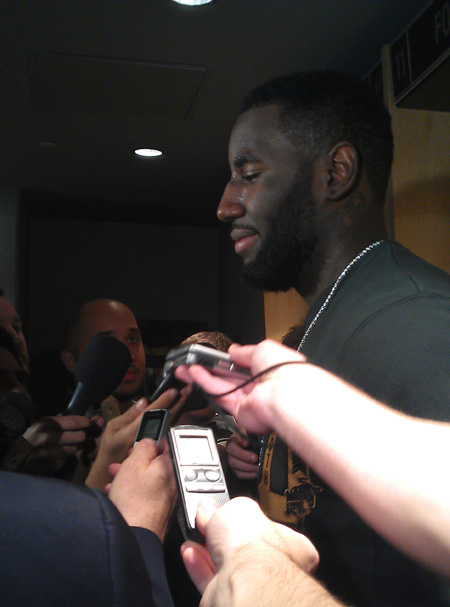 Below is a picture of rookie Kawhi Leonard sitting at his locker. A few minutes before this picture was taken, Vice President of Basketball Operations for the San Antonio Spurs, Danny Ferry, stopped by the rookie's locker to make sure Kawhi knew exactly where he needed to be. I won't list the details, obviously, but Ferry was very thorough at making sure his rookie didn't show up late or at the wrong spot. A few minutes after the pciture was taken, Tim Duncan walked from around the corner in the left side of the picture, thus causing the media to block the entrance to the showers. Leonard stood nearby waiting patiently till a staff member came by and created a path for him. I'd like to note that veteran players, like Jefferson, would have just walked right through the mass. 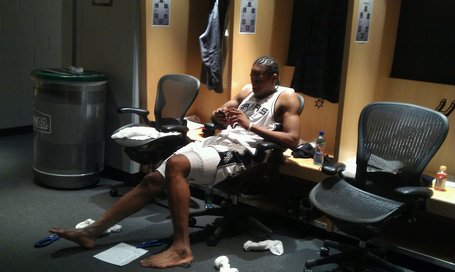