The season is shortened and filled with BABA's (back to backs) and Triple Lindys (back to back to backs). Each team's schedule is even more skewed towards its division and conference than normal. In order to maximize marquee match-ups, last year's best teams play each other more often. All this gives each team's schedule the potential to skew from docile to hazardous. I created a formula to rank each teams' schedule. Well to be honest, I didn't analyze each team -- just the ones I find interesting.

The foundation for my strength of schedule is a rank I assigned to each team. I gave each team a rank, from one to five, five implying strength, one implying weakness. Below are my rankings. Since the season began, I already moved a few teams north or south. For example, the Lakers fell from four to three and the Mavericks fell from five to three. (Yes, that felt great.) I increased the Nuggets score from two to three and am fearful they may hit 4 by mid-season. Below are my full rankings:

Obviously, each of these rankings is debatable. If you have a problem with some of them, meet me in the comment section. I set this system up so that it can evolve with the teams' ranks as the season progresses, (many vlookups were involved so that I can change one number, and everything is correctly affected).

As you can probably tell, the formula allows me to capture the impact of the back to back games. Since there are so many in this shortened season, I thought that this should be the most influential component to the formula.

So, this game on January 8th adds 5 points to the Spurs' strength of schedule. At first glance, a back to back against OKC seems deadly, but when you look closer and realize that we are home and OKC plays an away game the night before, it's suddenly not so bad. With Excel's help, I analyzed every game is this way for all the teams listed in the title. By summing the SOS's for each team's 66 games, I was able to derive a Strength of Schedule Score for each team. If you're curious, below is a picture of my spreadsheet. Yes, it took a while. And no, I'm not giving you the spreadsheet -- because it took a while. 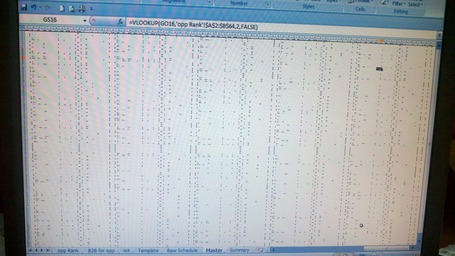 Makes your eyes hurt just to look at it

And now, the results, (remember, the higher the SOS the more potent the schedule).

The strength of schedule scores were heavily influenced by the team's conference, the amount of back to backs, the number of opponents caught on their second game of a back to back, and how badly the NBA wanted some great match-ups.

Feel free to draw your own conclusions; my thoughts on each team are below.

Miami is extremely unlucky as they do not catch many teams on the second night of a back to back. This, along with the NBA's desire for marquee match-ups, contributed to their very difficult schedule. Miami obviously looked great against Dallas, but they are not very deep. Their difficult schedule may wear them down by playoff time. (Off topic, can someone with juice please call Lebron out for using his headband as a toupee? Please? It's ridiculous. Also, Lebron speaking about the value of education is about as ridiculous as Kim Kardashian speaking about the sanctity of marriage. So, when does Kim get a commercial?)

Memphis has a great team, but this schedule seems too much too soon. They played well at the end of the season, and the NBA rewarded them with a schedule that fits a Western Conference contender. I know they are this year's sexy pick, but you should know that this schedule is not going to help them. There may be sour grapes influencing me, I'm sure, but this is a team that began last season 4-9. They only won 46 games the entire season. They caught the Spurs with a broken elbow and that series could still have gone either way. So, now are they the best team in the West? What?!? (Full disclaimer: I hate everyone.)

At least OKC's schedule is rough. That's about the only negative thing I can say about them. When your biggest issue is "Our second best player may actually be our best player. Oh, and they are both 23." then things are looking up.

Dallas threw this season away, right? Cuban thinks he's going to land a big fish via free agency? I have three thoughts on Dallas. First, I love watching a depressed Lamar Odom. It's fantastic. The guy is, at best, a fragile weirdo. Second, I think Mark Cuban should have taken Dirk's passport away. I just get the feeling he's been on a legendary three month bender in Germany. He was the biggest start was clearly counting on there not being a season. Third, Dallas lost DeShawn, Barea, and Chandler: toughness, energy, and defense. Good luck surviving this brutal schedule without them; I'm sure the fragile weirdo will fill all the holes.

The Clippers look better on paper than they actually are. This is a team that might develop into something scary at the end of this season or next year, but until then, they will simply be a team you wouldn't want to play a pickup game against. (This is what I'm choosing to believe. It makes it easier to sleep at night.)

The Bulls are another team that look better on paper. It seems like they always revert to one-on-one basketball in the final minutes of a close game. That can work during the regular season, but a good defensive playoff team will shut that nonsense down. I gave them a 5 because they are regular season beasts.

I included the Pacers because I like their components, but we'll have to see how they mesh with each other. I'm not sure if they have a winning recipe or just another Atlanta -- great ingredients, bad dish.

I have not had the chance to watch the Knicks play. If Tyson has the same affect on NY's defense that he had on Dallas', I'm willing to take a serious look at them. If he could negate Dirk's defensive liabilities, then I guess he could do the same for Amar'e and Carmelo.

Orlando is another regular season beast. Their issue is that they struggle to get high percentage shots in slow paced games. But they'll out-athletic you if you let them. They are scary during the regular season, not so much come playoff time.

Atlanta will probably be a high seed again; I'm thinking 4 to 5. They catch 27 opponents on their opponent's second game of a back to back. That's incredibly lucky. But they'll get blown out in the first or second round. That's what they do.

The Spurs got off relatively easy, as far as the schedule goes. That will be very helpful to our old guys.

We're only three games in, and even though the performance against the Rockets might lead us to believe that all BABA's will be tough for our team, I will now overstate all of the great things I saw against the Grizzlies. First, that's a game we would have lost last year. There is no way we would have kept that game close without Tim on the floor.

TJ Ford and Tiago were the difference. TJ is the best backup point guard Tony has ever had. In fact, he's a better point guard than Tony; well, a better pure point guard. He ran the team as well as possible. He doesn't score and is not flashy, but he set the tone for our second unit and did not make many mistakes. He's just a great player with a high basketball IQ. It's exactly what you want out of that position. He will make our second unit consistently competitive, and with this rigorous schedule, that will be vital.

Without Antonio McDyess, Pop was forced to play Tiago. Tiago would never have been given the minutes he received in the opener if the same scenario occurred last season. Pop would have gone with McDyess and Bonner. Randolph and Gasol would have killed us. Instead, Tiago received the minutes and played his best game as a Spur. He played so well that when the Grizzlies were attempting to cut into our lead in the fourth, Pop chose to put Tiago back in the game to close it out. Tiago and Tim regained control of the paint and the Spurs regained control of the game. It's not just Tiago's one-on-one defense, although it is a huge upgrade over Bonner/Blair's, it's his help defense. If you're Randolph, or any other Memphis player, once you get by your initial defender who would you rather run into at the rim; Tiago or Blair? Tiago gives the Spurs a defensive presence that has been missing since the Admiral roamed the paint with Tim.

Oh, and that rookie with the difficult first name is pretty good. He's not a basketball player, but he looked like the most athletic player on the floor. He has great hands (Hands of Fate) and he lets the game come to him intuitively. His play reminded me of Dennis Rodman, pre-tattoos. He has a nose for the ball and the athleticism to find it. When Chip teaches him how to shoot, we'll really have something special.

Well, that was fun. Before you blow up my comment section, I am very willing to change a team's rank, if you make a compelling argument. Also, if you follow a crappy team that didn't make my analysis, let me first say, "That sucks, man. Why are you doing that to yourself? Just do what every Miami fan did and jump on a bandwagon." Just kidding, I'll run the numbers for your team if you ask.