So here we are, the tail end of the first of many back-to-backs. And the opponent is pretty darn familiar already. Let's take a moment to remember what a very different opponent this almost was before Houston, along with the Lakers and NOLA, got Sterned. I still think that that original deal was a good one, one that benefited all teams. Don't get me wrong, I have no interest in seeing Dwight Howard and Chris Paul in a Laker uniform together, but still. Houston would have been a very different squad with the acquisition of Pau Gasol, no?

But before I get to tonight's preview, I am going to bore you, dear reader, with tales from my childhood. Hey, I'm still in the holiday mood, OK? Here goes. When I was a kid, I have to confess that my favorite basketball team was the Boston Celtics. Sure, I marveled at the Ice Man, and wanted the Spurs to do well. But I don't think I was quite a believer yet, and, like a lot of American boys my age, I was rather caught up in that wonderful Lakers/Celtics rivalry of the eighties. Most people picked sides in that one, and I rooted for the Celtics. The Lakers were loaded with talent and glamor, but those Celtics teams really captured my devotion. I was not a basketball player, but I knew artistry when I saw it. I am grateful to Magic and Bird for establishing for me early on two things about the game of basketball that I still value deeply: both of those guys were relentless competitors; and both of them were incredible passers. The Celtics particularly could move that ball around like nobody's business. I still feel that the more I focus on all the cutting and moving without the ball, and the more I try to see the big picture, then the more I enjoy the game and the better I understand what the heck is going on. Bird and Magic taught me to not just focus on the man with the ball.

There are two other beautiful aspects of the game that watching those Bird Era Celtics teams hammered home for me. First, although Larry Bird was always their star, that team succeeded because they had a great group of guys that really shared the ball and played together. Sound familiar, Spurs lovers? Boston had the great defender Dennis Johnson, rest in peace, who was perhaps my favorite player on that team. Even annoying little Danny Ainge with his pesky defense and timely threes won me over. There was The Chief, with his stoic demeanor and bruising, herky-jerky style. And, last but not least, there was the other artist on the Celtics, surely not as appreciated as Bird, but one of the greatest ever. What he demonstrated was that basketball was not only about power, it was also about gracefulness. Footwork and fundamentals can trump sheer brute force in this game. The man that taught me that was Kevin McHale. 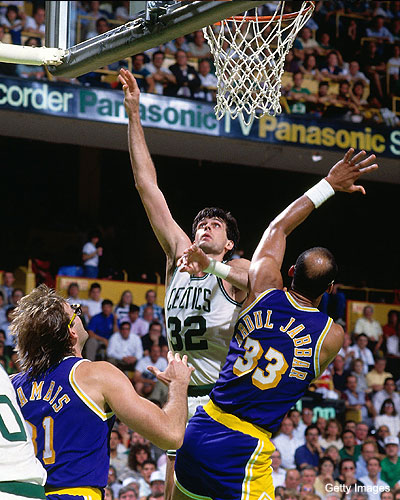 If you aren't old enough to have watched those Celtics teams, do yourself a favor and check out some YouTube footage of Kevin McHale, the player. (Here is a pretty good one, but there are others. Also, apparently there is a Kevin McHale associated with some show called Glee. This is not the same Kevin McHale.) I honestly don't know if McHale is any good at coaching. His snarky brand of television broadcasting doesn't really do it for me, either. But the man was an artist on the basketball court. Foot. Work. The guy was like a ballet dancer on the floor. He had so many smooth but unique post moves, combined with those long arms and a deft touch. Defenders were usually helpless to stop him once he got the ball in the low paint. For me, the line of great power forwards with silky offense goes like this: McHale, Olajuwan, Duncan. I don't know who is next. Fundamentals and footwork don't seem very heavily valued in today's game, especially with so many NBA players having little or no college careers (no disrespect to you, Kawhi).

The Rockets were the first Texas team to make the NBA Finals, way back in 1981, and they were beaten handily by McHale's Celtics. But soon, Texas teams would be blessed with a wealth of riches when it comes to great forwards, and many championships would follow. Houston went from Choke City to Clutch City with Hakeem and his boys. The Spurs and Tim Duncan picked up that mantle a little over a decade ago, and have done Texas proud. Now even the Mavericks have a title, thanks in large part to the ever tricky Dirk Nowitzki. Seven titles. A Texas Trifecta. And now that an old Celtic power forward is helming the Rockets, it seems like everything is coming full circle.

All right, enough nostalgia. My hat is off to you, Kevin McHale. And now, we are going to crush your team.

The Rockets may not have made a big trade this offseason, but they have some pretty fine talent as it is, and the Spurs had better be ready tonight, or as ready as they can be on such short notice. Our Young Ones will need to contribute tonight, in spades. This game will give us a glimpse of how Popovich manages minutes and implements on-the-job training in this crazy season of playing four and five games per week. Let's get to it!

The Spurs looked sharp against a hot young Clippers team last night. The Rockets should be fresh with two nights of rest, and are always tough at home. I get the feeling Coach McHale and the team are still trying to figure things out. They looked a little disorderly in the preseason, and the Magic lead from the get go the other night in their first game of the regular season. Scola and Lowry both scored about 20 points in that one, and they also got double figures from Lee, Dalembert and and Williams. They got most of their points in the paint or from mid-range jumpers, and shot poorly from the 3 point line: 22%. But they had more rebounds than Orlando, and more assists. They also took care of the ball, only turning it over 9 times. This is a feisty team, and they have some dangerous scorers in Scola, Lowry and Martin, and they take care of the ball. And you just know Chase Budinger is going to light us up at some point.