Statistically Speaking ... Game 1 vs the Grizz

Share All sharing options for: Statistically Speaking ... Game 1 vs the Grizz

The NBA and the Spurs are back, and with that, comes the overflow of stats and information. When you're watching a game, whether it be in person, online, on the radio, or heck even on TV like some caveman, you're probably not thinking about the types of plays the Spurs are running and how effective they are. Let's check out what went right and what went wrong in the game last night.

If you're not familiar with the Grizzlies, or you drank enough to block the memory of the playoffs out, here are some quick things you need to know.

The Spurs game plan against the Memphis offense is to stick with the P&R ball handler. In just about every possession where Memphis ran a P&R play (a staggering 31 times out of 108 total plays), both of the Spurs defenders stick with the ball handler and leave the man setting the pick. To understand why they do this, you must understand the Spurs defense. The Spurs defense is preplanned to give each opponent the lowest percentage shot. In the case of Memphis, sticking with the P&R man makes sense because Memphis usually has a center (Randolph or Gasol) set the pick for a guard. Memphis sets these picks just under the three-point line, so that means Randolph or Gasol is left wide open at or behind the three-point line. Randolph shot 18.6% from three last year, and Gasol has only shot 9 three-pointers his entire NBA career. Thus, if you follow the P&R ball-handler, have two defenders on a better shooter, leaving Gasol or Randolph open for three is acceptable. 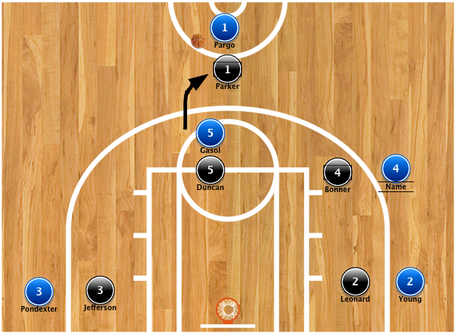 This is the set up of most of the P&R plays for Memphis. It starts with the PG/SG up top behind the three-point line, with the C coming to set the pick. 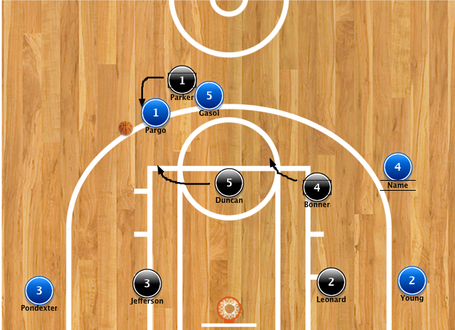 In this case, Parker rolls around the P&R, essentially trailing his man, the ball handler. In the meantime, Duncan stays outside of the action and waits on the ball handler (Pargo in this example) to come off of the screen. The other three Spurs defenders (Jefferson, Leonard, Bonner in this case) sink towards the paint to prevent the ball handler from getting around Tim Kness. Bonner also puts a body on Gasol who is cutting to the rim after the screen he sets. 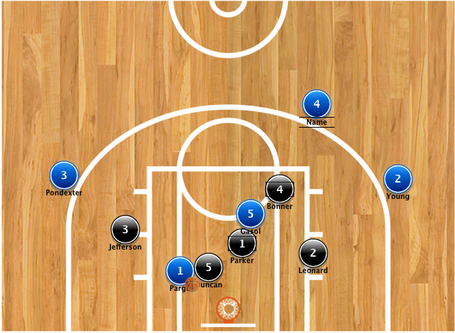 Pargo has a few things he can do at this point. He can try the shot (which he did in this play and got blocked by Duncan), he can pass it to any three team mates for the open shot, or try and pass it to Gasol who has pretty good position down low. Each of these decisions come with consequences. If he tries the shot, like I mentioned, he may get blocked, or he can miss the shot. This is where most fans get frustrated because if you notice, the only body on Gasol is Tony Parker, who is much too short to grab a rebound. If he passes to any of his team mates, the Spurs are in perfect position to close out. Mind you, it may be too late once they get there to defend, but shooting a three or long jumper is statistically in the Spurs favor in comparison to a layup or a lob to Gasol.

"But what if Gasol or Randolph decide to drive to the rim, Josh?!" Quiet, you. I was about to get to that. If Gasol or Randolph decide to shoot after the P&R or drive to the rim, they are actually very successful against the Spurs. The Spurs don't have the size to stop either guy from getting to the rim (rare if teams do), and blocking a 7-footer's shot is nigh on impossible. Last night, after the P&R was ran and the ball goes to the pick setter got the ball 11 times. In those 11 attempts, the Grizzlies shot 6-7 FG, 1-1 3pt. Very impressive.

Next time I'll break down the Spurs offense.