Gunnin' for the Griz'

Share All sharing options for: Gunnin' for the Griz'

Perfect season opener for the Spurs: chance to begin to avenge the playoff loss to Memphis. The house was packed with cheering Spurs fans wearing their silver and black. A giant spurs flag dropped down from the ceiling at center court. Small black towels were placed on each seat, and on cue, even those in the privileged seats waived theirs. Balloons were dropped from the ceiling. Flag waving members of Team Energy and the Coyote urged the crowd to bring on the noise, while the Silver Dancers - well, they did their usual hip-shaking routine. Tony Parker took to the PA and thanked the fans for their patience and welcomed them back. The season that many feared would never happen was underway. 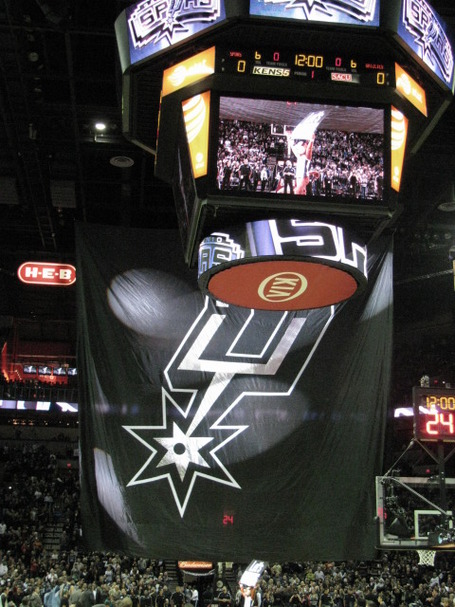 More photos after the jump.

Before the game began, I went over to greet Peter Holt. He acknowledged that the lockout had been "the summer from Hell," and said he believed Spurs' fans had put it all behind them. Seated next to him was Tommy Lee Jones, who I guess is the Spurs' answer to Jack Nicholson. 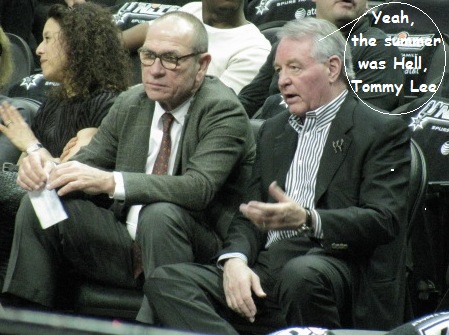 The lights remained on longer than usual before the Spurs starters were introduced, so I was able to get a shot of Manu engaging in his customary pre-game behavior of slapping the side of the backboard (it's in soft focus to help hide that bald spot - really! Please believe that.) 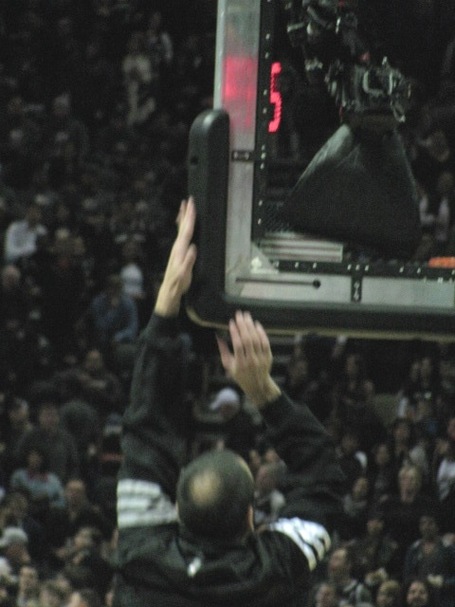 Tim and DeJuan both got into foul trouble, but Tiago came off the bench for 30+ minutes of solid play. The experience of playing against the big and physical Memphis front court will surely pay dividends for him in future games. 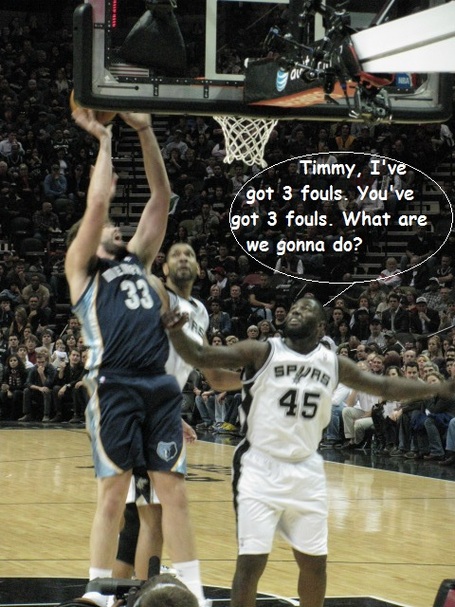 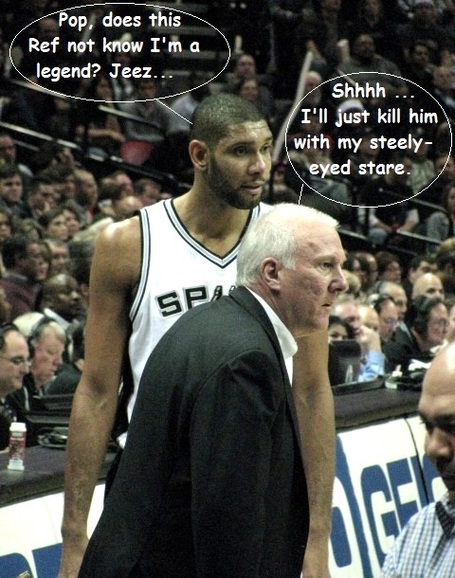 The Spurs were down by one at the half, in spite of some dismal shooting. But then Manu decided to remind the Grizzlies that they couldn't keep him from scoring when he had only one arm in the playoffs - how could they expect to stop him when he could use both arms? It was a vintage Ginobili performance: scoring on rainbow threes, enticing the Griz to foul him with his fakes, weaving his way through the lane for a bucket, and stealing the ball for a coast to coast dunk. 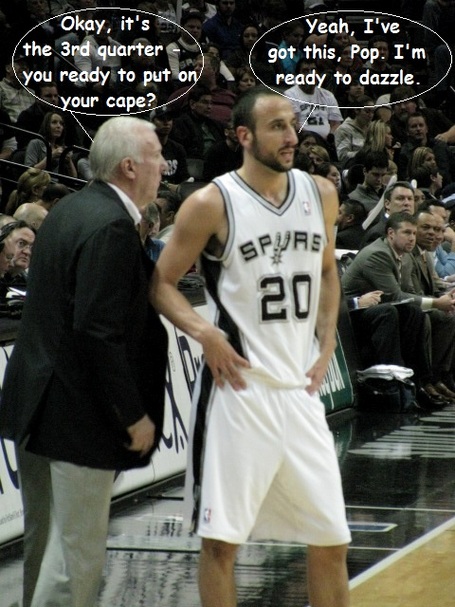 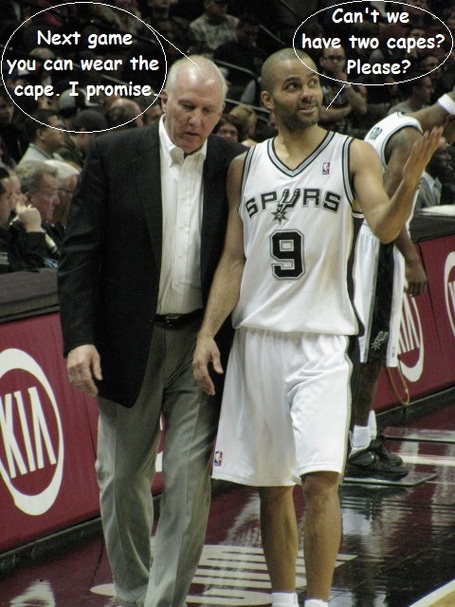 Zach Randolph was 4 of 8 from the free throw line - and Spurs fans cheered every miss as loudly as they would a make by Tiago. 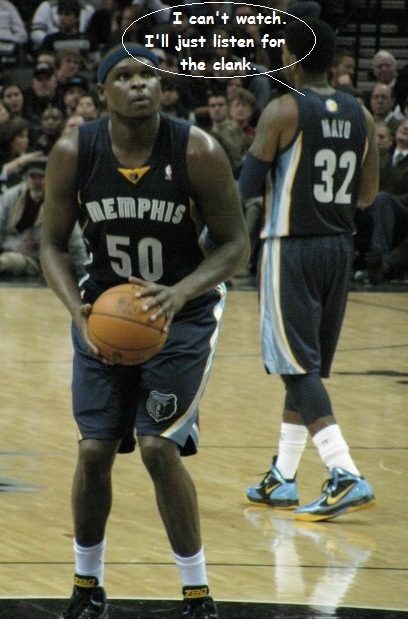 Pop had running conversations with all three refs - this one seemed amused. 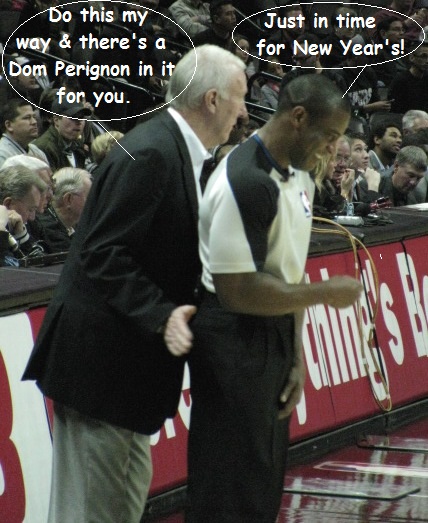 As Manu stole the ball late in the game under the Griz basket from Rudy Gay and raced all the way to the other end, the fans in the AT&T Center held their collective breaths, wondering if he had enough left in his tank to get to the rim for the dunk. The roof then was raised a few inches in the arena! 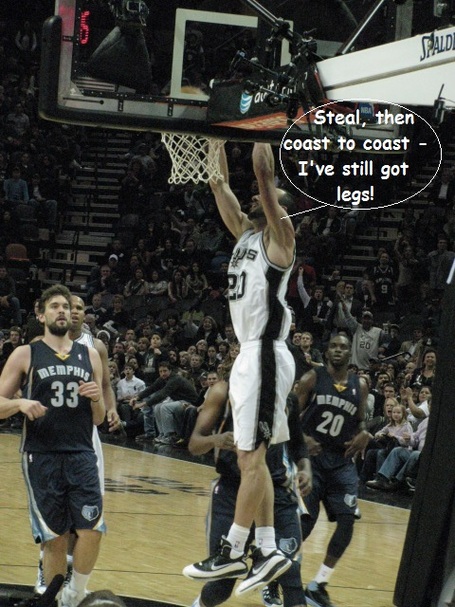 Why the RJ sign? My two seatmates and I chose to encourage Antonio McDyess last season as an under-appreciated Spur. When we discussed who we thought needed the encouragement most this season, RJ seemed a natural. He appreciated it and acknowledged it with wave and a smile, and then went out and played a darn solid game (and he has some new sneaks that are really nice this season). 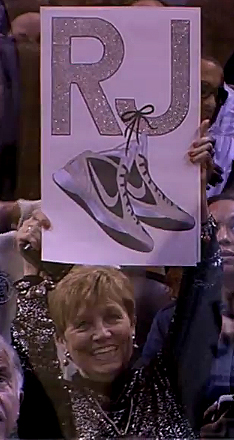 Speaking of shoes, do you know to whom these belong? Put your guess in the comments.