There and Back Again

Share All sharing options for: There and Back Again

When JRW asked if I was interested in representing PtR at last night's game, I had two immediate, visceral reactions: "YES YES YES!" and "OH GOD." The first because it's an extraordinarily cool opportunity I may never get again, the second because the prospect of coming face to face with Pop and the other players, while trying to avoid embarrassment, was terrifying.

As the circled date of December 26th drew nearer, I felt a combination of anticipation and dread. I'd heard the stories. I knew the stakes. My objective was to be a spectre, silent, invisible. A shadow in the night. Fortunately, I had JRW to keep me company. 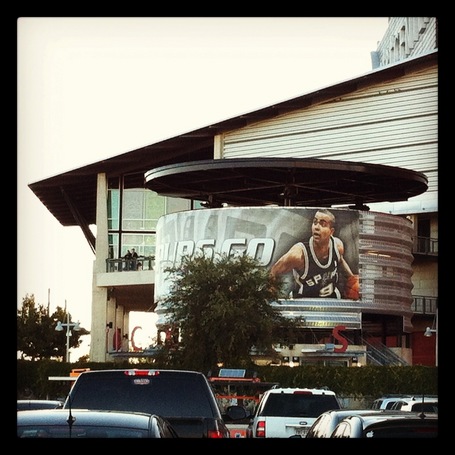 The first thing you notice about JRW is that he's actually pretty good-looking, for an internet writer. There's usually a reason we hide behind the relative anonymity of goofy screen names and avatars. He met me at a Valero before leading me into the media parking lot. I couldn't hear what he was saying to the guys at the gate, but there was some motioning and glancing in my direction. I thought the right move was to smile and wave back, so I did. Keep it cool. You've done this a million times.

After going in through the top-secret Media Entrance, complete with voice ID, retinal scan, and the taking of DNA samples*, I was given my single-game press pass. AFFILIATION: POUNDING THE ROCK. Wow, I've... like, never seen this written on paper before.

The underground of the SBC Center is an impassable labyrinth of off-white corridors, signs pointing you in one direction that's not actually the quickest way to get where you're going, and several open doors through which you can see players and staff working out inside. Wait--that's Dejuan Blair lifting weights! Kawhi getting taped up! They're right there! It felt like I had stepped into the Pensieve and was living someone else's memory, where I could roam around and observe, but not interact.

And then... the Big Reveal. We stepped out on the floor of the AT&T Center, and my jaw dropped--well, it dropped in my mind. I was focusing everything in me on keeping my bearing as impassive as possible, when inside I was jumping up and down like a schoolgirl at a Twilight premiere. Richard Jefferson was working through some shooting drills with Chip Engelland, and I could take a seat right on the front row and watch. R.C. Buford was talking with... somebody. Richard Oliver was pacing back and forth scribbling into a notepad. Greg Simmons, the highest-paid sportscaster in San Antonio, was taping a live introduction for the news. It was surreal. OH GOD OH GOD KEEP IT COOL. GAME FACE. IF YOU EMBARRASS PTR, THE BOUNTY HUNTERS WILL BE WAITING FOR YOU IN THE PARKING LOT. 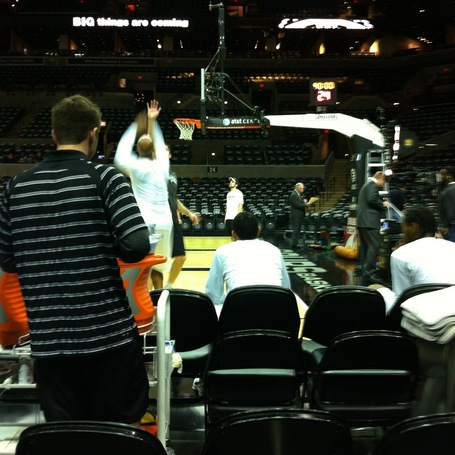 JRW and I linked up with a couple guys from 48 Minutes of Hell, and they proceeded to talk shop while I just watched. And listened. Kawhi and Corey Joseph were sitting on the bench hearing from Chip about how shootaround was going to work. "When you make the big shots, you get prime time [on the court for warm-ups]," he said. Greg Simmons was interviewing Dejuan, and JRW asked me to sneak over and listen in. The usual kind of "good to be back," "we've been working hard," something something etc that I couldn't totally hear, but they were laughing.

Actually, DeJuan was kind of always laughing, but I'll let JRW address that in his own time. 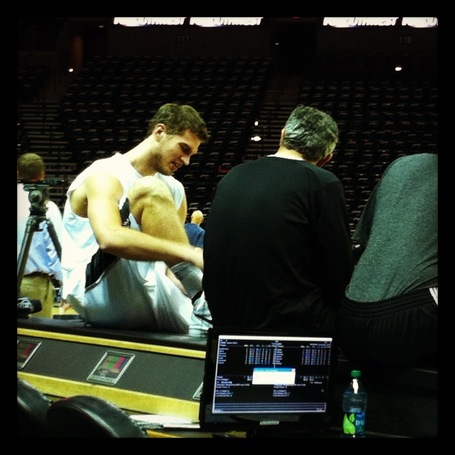 When Tim and Tony came out on the court together, they were already loose. They proceeded to hit shot after shot, together, for the next seven minutes. You know how you're shooting around with your buddies, invariably (when two of you shoot at once) the balls will bounce off each other, and no one scores? That never happened, not once. At one point, Tony snuck behind Tim and knocked the ball into the seats, and everyone burst out laughing. "You saw him coming, didn't you Chip?" Tim asked. "You bet, but I wasn't going to say anything!" Chip replied. 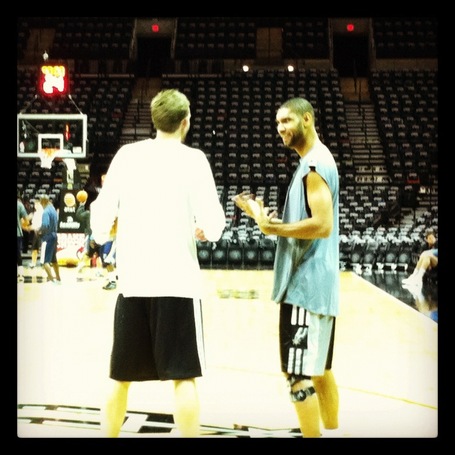 At 6:15, we gathered in the hallway (about eight of us) outside the locker room to meet with Coach Pop. When he came out the door and started walking towards us, my heart just about stopped. I quickly switched my phone to "Airplane Mode" and started recording. A couple of the braver souls asked some questions about how the lockout affected preparation, how he felt about the rookies, and such, and Pop gave his typical brusque answers. The entire time, his eyes swept around the little circle of reporters, back and forth. Like a penetrating laser. OH GOD HE SAW ME QUICK LOOK AT THE FLOOR. HEAD DOWN. HIDE BEHIND MIKE MONROE.

It was five of the scariest minutes of my life.

I shouldn't have worried--JRW told me afterwards that since Pop had never seen me before, he wasn't going to call me out. At least, not this time. I had a question in my back pocket just in case, but I ended up selling it to JRW for a bag of popcorn.*

After an excellent meal of chicken and tortilla soup--Man, this is all for free? And why is a picture of Justin Bieber next to one of Manu?--we took our seats for the game, about halfway up the lower level, at a little wooden table.

My phone battery was already down to 9%. 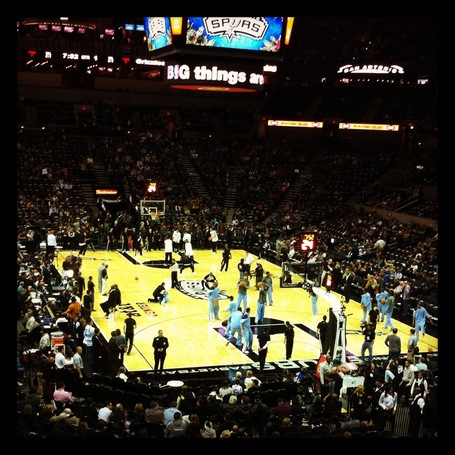 I've been to several Spurs games in my time, but the anticipation in the room for this one was HUGE. As the video board walked us through the roster--Look, Jefferson smiling! Matt Bonner trying to look tough!--every man got a loud cheer. If anyone was ready to give up on basketball, if the lockout had pushed anyone to apathy, they either weren't there or had been converted. And then they dropped hundreds of skinny balloons from the ceiling, slowly snaking their way down like a microscope's view of antibodies attacking a virus.

I won't go into great detail concerning the game itself, because SpursFanSteve has already done that excellently. I'll just hit a few points that stuck out to me:

-It's always a good sign when Manu snatches the ball on the first play and drives in for a lay-up.

-RJ 3.0 is real, and a lot of us should be prepared to cook a steaming bowl of crow. He had energy, he was drilling that corner three, and was on-the-spot on defense. There was a moment in the second quarter when the Spurs had gone on a mini-run, and RJ had basically taken over the game, knocking down shots, getting his hands on the ball, generally playing outside his mind--and Memphis called time out. While walking back to the bench with T.J. Ford (how great is it to finally have a true backup PG, by the way? Sorry, Georgeous), he put his arm around Ford's neck. I have a hunch, and we'll see how this develops, but it's possible that T.J. Ford is the best thing that's ever happened to Richard Jefferson.

-I had another theory that Kawhi Leonard is the inverse of Matt Bonner... that if you combine Leonard's defensive skills with Bonner's shooting, you'd get one complete basketball player. Because for a while, Kawhi couldn't hit a shot to save his life. What turned things around? The corner three, of course. I rescinded that comment.

-Heisman Trophy winner Robert Griffin III was in attendance, and I walked by him doing an interview at halftime. It was a testament to my earlier experiences that I was basically ho-hum about that.

Overall, it was a really fun game, and a great way to start the season. Everyone contributed, the defense looked pretty good (considering the lockout), and we vanquished our mortal, playoff-eliminating enemies. When the Spurs went full blitzkrieg in the 3rd quarter, I noted on Twitter that they were in a Gus Fring-esque "blood for blood" mode. The Grizzlies were the cartel, and they were all going down.

As we made our way back downstairs for the post-game, the gaggle of reporters was substantially larger, and it became evident to me that reading the quotes--or even seeing the video--was nothing compared to witnessing Pop's overwhelming joie de vivre after winning a game. By this, I mean that from the sound of it, you might have thought we lost. JRW mentioned that Pop has three words he uses to describe victories: Stink, Stank, and Stunk.

After that harrowing encounter (during which he made no eye contact with me, for which I was grateful because I probably would have been incinerated on the spot), we made our way to the locker room. HOLY CRAP. HOLY CRAP. The first thing that hit me was that it smaller than I expected. I imagine it's just as large as it needs to be, but I had really built it up in my mind as an athletic Valhalla, despite everything I know about how no-frills this team is. The intimacy made for an amusing sight as the players emerged in ones and twos, and the media teams would swarm from one corner of the room to the next, getting sound bites from Manu or Tony at the expense of crowding Ford or Danny Green out from their own lockers.

I had an opportunity to ask a question or two, but I didn't take it. I'm not sure why. I think I felt like it would need to be a really great question, the best, most insightful question that had ever been asked, but that's almost certainly wrong. After all, Kawhi and some of the others are younger than me. He had just played in his first regular-season NBA game. How should he know what kind of questions he usually gets? I could have asked if he'd seen the new Mission: Impossible movie, and he might have been pleased to not have to talk about how great he is for ten seconds.

Then again, JRW might not have been as pleased.

I hope I get to do this again. We have a very talented staff here at PtR, and if this was my only chance to go, I'll take it. It was easily one of the top three coolest experiences of my life, and I couldn't have asked for a better game to cover--for the team, for the site, and for me as a lifelong Spurs fan. Hold on to your butts, because this season is going to be fun. 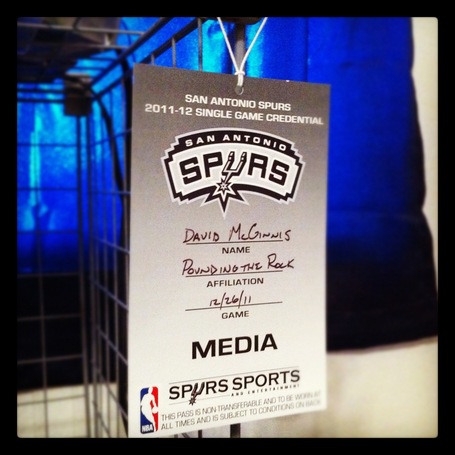