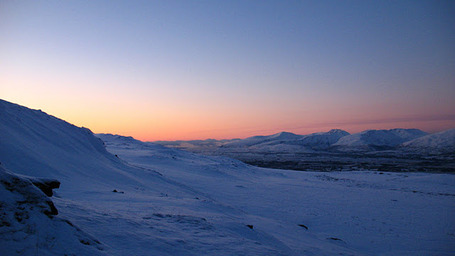 We open on a vast expanse and pan across miles and miles of ice and snow: exterior shot of the North Pole. It seems to be either dawn or dusk, and there is not a living thing in sight. The pan continues for a reveal of Jim's Coffee Shop, a smallish exterior with most of the structure underground. There is a neon sign that proudly states "24 hours" and a smaller, hand painted sign with the addendum "Open 364 days a year, closed on Dec 26th for private party."

As the shot nears the restaurant, a large group of figures can be seen around a humongous table (or maybe several tables that have been pushed together) and we can begin to discern voices; one in particular. It is an aged voice, full of both energy and cynicism.

SFX: The camera seems to pass through the window, and we are now inside Jim's Coffee Shop, joining a meal, and a conversation that's been going on for quite a while. We can't see everyone present, but we do hear the main voice continuing his diatribe.

Grinch: So, friends, essentially the Spurs are done for, are they not? Pass the salt. After all the angst of the lockout, I thought my heart had gotten even smaller. Then my pals David Stern and Derek Fisher finally talked some sense into everyone, and now there is joy down in Whoville once more. My soul soared! My devilish grin became almost angelic. I even plunked down ninety bucks for my custom Steve Novak jersey. Oh, the indignity of it all.

Grinch: What are you laughing at, Nicky? I'm dying here! Ketchup, if you please.

Claus: I'm laughing at you, you pessimistic old imp. Always seeing the dark side of things. Ho, ho, ho!

Grinch: Hey, things are dark! Even my pathetic excuse for a dog knows the Spurs needed to shore up their front line this offseason. They made Zach Randolph look like Olajuwon in that last series.

Grinch: Don't get me started!

Grinch: Yeah, I know, King, and he's a fine player, but he ate our lunch, and everybody knows we have to get bigger. Protect the rim. Clog the lane. Waitress! More coffee, my dear. So what happens? In this laughably short offseason we just twiddle our thumbs while every four and five worth his salt gets snatched up other people's chimneys! What is the front office doing? Hey, I am thrilled to find TJ Ford in my stocking, don't get me wrong, but he is not going to be blocking many shots this season.

Grinch: Well? Am I wrong?

Claus: Oh, ho, ho. You are indeed. Why, you are overlooking all the wonderful opportunities of this roster. Of course, we will all miss George Hill. And No-ho-ho-vak. Such nice boys. But we have so many other good boys on the team.

Grinch: I hear Tony has been naughty.

Claus: Now, now. We wipe the slate clean around here. Tony has been a very nice boy this year.

Grinch: All right, but aren't you being a good bit too saintly there, Nick? The Big Three don't seem quite as big as they used to. And look at their supporting cast. A sandwich-eating three point artist who can't sink a single three pointer after April. A starting center with no knee ligaments who will get about as many blocks this season as Cindy Lou Who--

Grinch: --A small forward who apparently cannot figure out how to score or defend, and who we can't even amnesty away. Nick, how can the front office just stand pat with that bunch? The run is over!

Grinch: All right, reindeer, you want to try to cheer me up now?

Blitzen: Look, Santa isn't totally off, here. It's not all doom and gloom. The Spurs ain't perfect, but nobody in the West is perfect. And some of the contenders didn't do themselves any favors this off-season.

Princess Beatrice: Excuse me, guys, I'll be right back...

Elvis: Who invited the pony? This is the third time she's gone to the powder room, and we barely ordered.

Grinch: Probably combing her mane again. Man, is it hard referring to her Mavericks as "champions."

Elvis: Thank you very much!

Claus: Now, boys. Her team earned it, fair and square. They have my, ahem (cough) um ... respect.

Blitzen: OK, let's start with the Mavs. Defending champs, right? Two seasons ago, we swept those bums, and now they're champs. Fine. How'd they do it? Chandler. He was key. Finally got themselves some solid post defense and fire. But the great Dallas brain trust made sure Chandler ended up in a Knicks jersey this season. Not exactly brillian front office work.

Grinch: Well, yes, but they picked up Odom.

Blitzen: Lamar Kardashian? He's a good player, sure, but he doesn't replace what Chandler brought to the table. The Mavericks are not going to be the same team. And last time I checked, they are a bit long in the tooth themselves.

Grinch: Good point. Ok, what about the Lakers?

Blitzen: Ah, the Lakers. Well, they had an interesting offseason. Wanted both Paul and Howard, wound up with neither of them, and then had to ship off a disgruntled Odom. Suddenly no more talk of all their "length." And last time I checked Kobe is subject to the passage of time, just like Timmy.

Grinch: All right, I guess LA is not exactly invincible anymore. But how about Elvis's beloved Grizz? THAT team isn't getting any smaller.

Blitzen: Except they are. Arthur got injured, and now they don't have nearly the depth in the front court that they had last season. Factor in our own improved and healthy Splitter, and now we don't look quite so outmatched in the post. And they also lost Battier to free agency. That is not a small deal. He was crucial for them. Throw in Anderson and Leonard to match their size on the wings, and I have to tell you, I'm starting to like how we'll match up with those guys this year. Wipe that curl off your lip, Elvis.

Grinch: Ok, you have made me feel a little better about Memphis. But what about the team that knocked the Grizzlies out, OKC? The Thunder are loaded!

Blitzen: The Thunder are good, young, and deep. But, did I mention they are young? They do have a tough man in the post, Perkins, but he is also their only player with any Finals experience. And he was on the losing end. My reindeer intuition tells me that we have the experience to compete with those guys, who are still just pups. Scary athletic pups, but pups. And that goes ditto for the new Los Angeles glamour team, the Clippers.

Grinch: So, seriously, you are telling me that we should feel good about dragging out the same old (and I do mean old) team this season, while it seems like everybody else got better? What is this: reindeer math?

Blitzen: All I'm saying is, don't freak out. First of all, the Spurs aren't old, and you know it. Outside of Tim and Manu, it's a young team with a mix of fresh kids and savvy wily veterans. Secondly, there was an awful lot of movement this offseason, and just like your average dumb reindeer will get distracted by shiny objects, we fans want our teams to make trades. But there is a decided advantage to continuity -- to corporate experience. Hey, this team won a bunch of games last season, then had a few mishaps down the stretch. Maybe a healthy Big Three and a year of maturation for the Young Ones, plus a couple of New Additions... Maybe that's enough. Hey, it worked for Dallas.

Blitzen: And lastly, everybody else didn't get better. The other teams out West have their issues, too. In the flurry of free agency, most of the Contenders have lost a step. Pass the mustard.