You're a Sly One, Popovich: Annual Tradition

Share All sharing options for: You're a Sly One, Popovich: Annual Tradition

Back by popular demand, it's the second annual posting of our most well-known musical parody. We don't have a new Christmas treat for you this year (as of yet) but you can enjoy this again (or for the first time) just the same.

Lyrics after the jump.

You're a sly one, Popovich,
With every draft day steal.
You're sneaky with that waiver wire, you're slippery as an eel, Popovich,
You're a scary mamba jamba with the deadly Gary Neal!

You're a plotter, Popovich,
Your interviews are droll,
Your brain is full of scheming, you've got winning in your soul, Popovich,
Teams couldn't beat your defense with a six-and-a-half foot goal!

You're a wily one, Popovich,
You grimace instead of smile,
Yet you have this hidden sweetness despite your constant guile, Popovich,
Given the choice between you and other coaches, I'll take the clenched tooth smile!

You're a strange one, Popovich,
Your teams always debunk,
Your roster's full of washed-up jocks, your offense now has dunks, Popovich,
The three words you use for wins are as follows, and I quote, "Stink, Stank, Stunk!"

The Spurs are rotters, Popovich,
They steal oppenents' playoff spots,
Their boring brand of basketball makes the whole league want to plotz, Popovich,
This team is an old slow-moving heap overflowing with the most disgraceful assortment of floppers imaginable, tangling Phil Jackson up in knots!

You nauseate Stern, Popovich,
With a nauseous super "naus",
You're not a crooked head honcho and you're much the better boss, Popovich,
You're a gourmet ice cream sundae with Bailey's and raspberry chocolate sauce!

Merry Christmas to Everyone! 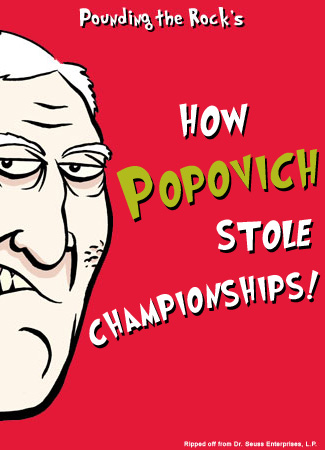 Here's a link to the original by the incomparable Thurl Ravenscroft and the genius Theodor "Dr. Seuss" Geisel.

Lyrics by CapHill and J.R. Wilco

This is a Completely Deck Production