They're Back! And All's Right With the World

Share All sharing options for: They're Back! And All's Right With the World

It was good to be back "home" tonight. There were smiles and hugs all around as people greeted each other: fans, ushers, security guards, ticket representatives, and players. I got to be in the Fan Tunnel to "high-five" the team as they took the court (at 5'2", it was more of a low five). It felt genuinely good to be back in the AT&T Center, and any mental scars left from the lockout seemed to have disappeared from the minds of the fans in attendance. This first post in Scenes From the Season will be partly about the atmosphere, and partly about the game.

My favorite image of the night was seeing the Big Three standing together on the court, the beginning of their 10th season together. 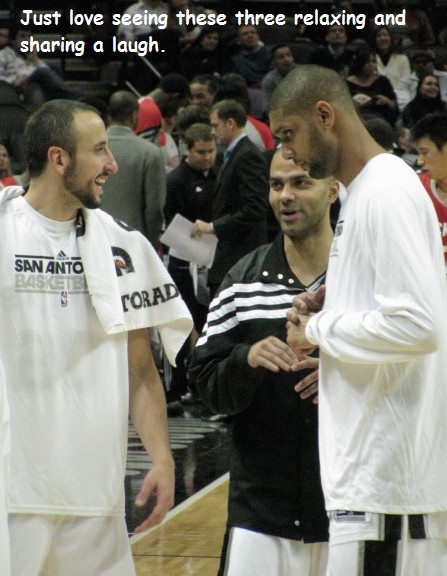 While waiting to be go to my seat, I snapped these photos of two different Spurs' fans, each celebrating the return to basketball in their own unique way: 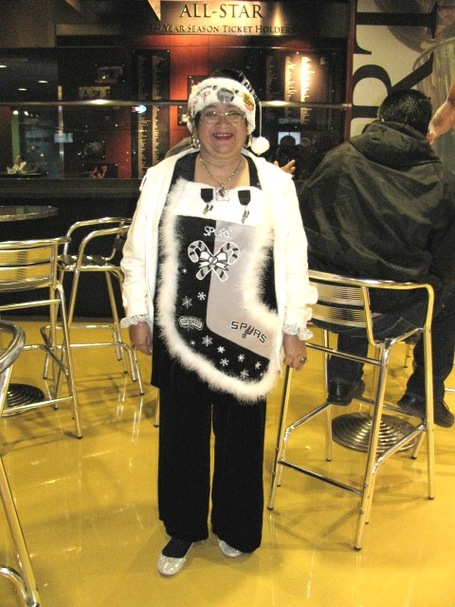 This woman is delightfully funny. She makes her own Spurs costumes and has a truck painted (professionally) with the four trophies on it and a huge autograph from George Hill across the hood.

I had never seen this man before at a game, but he and his girlfriend sat in the bar before the game, carefully painting Spurs decor on their arms and faces. 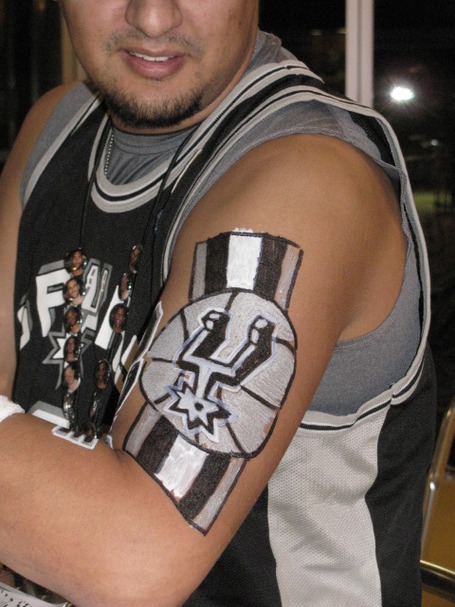 Spurs Jesus wasn't in attendance tonight, but these four guys were, calling themselves "Bonner's Bro," but with only one redhead among them, the other three had to resort to wearing wigs. 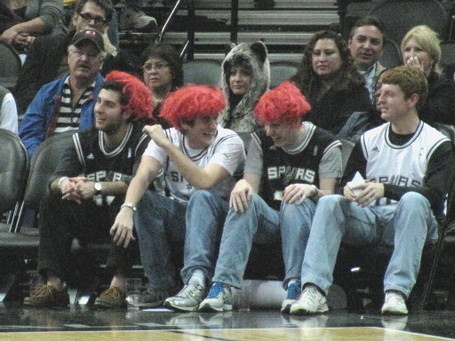 Various players have their pregame rituals. Tim has to get the game ball and hug it, then he has to hang from the rim before introductions. Manu has his little thing that he does, too. I've been trying for three seasons to get a shot of this - tough to get the right light in the dark gym at the right moment - 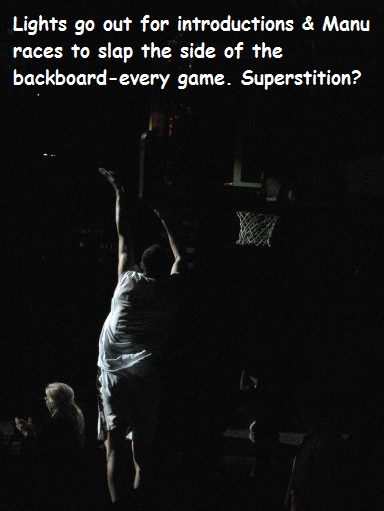 Scola and Ginobili greeted each other warmly at midcourt before the tip-off, but all those years of friendship were forgotten as soon as the ball was tossed up. Each gave the other a shove to gain position as the game started, but the tip went to Tony on the other side. 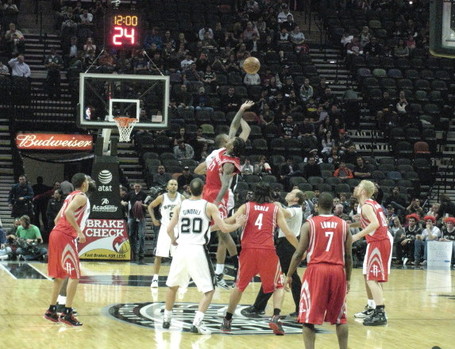 DeJuan Blair had three steals on the night - the next two photos show him about to take the ball from Scola. He would then take off on a fast break (for DeJuan it was fast) with Scola chasing. He softly laid the ball in the basket. 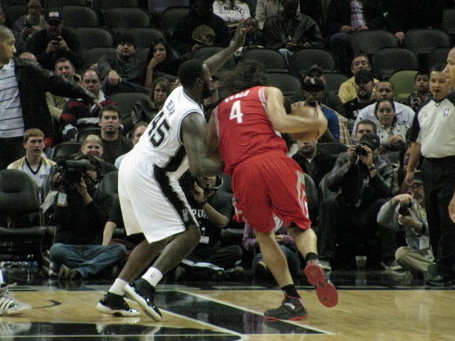 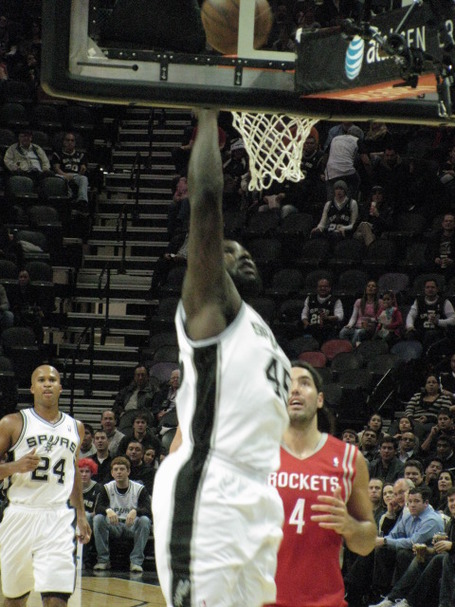 Tiago displayed his moves on this up and under shot: 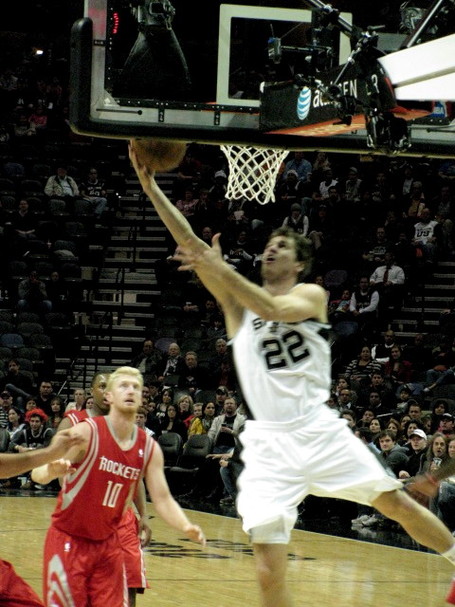 Tim's work for the night was done after three quarters, so he took a walk over to where David Robinson was seated on the baseline. I don't know what was said, but I can tell you David looks like he could still suit up and contribute. Heck, his very presence on the court would scare the rest of the league. 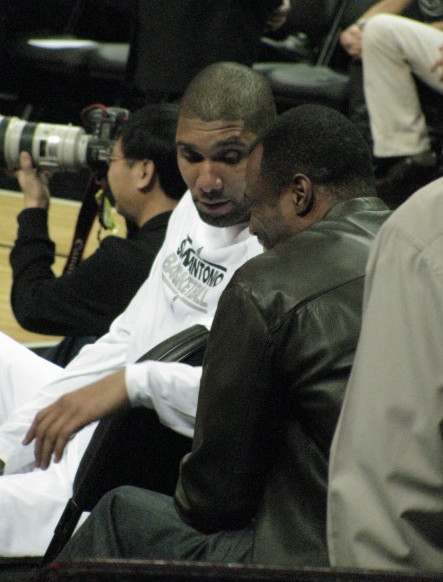 And then there was Kawhi Leonard's game winning shot, and "the little camera that could" couldn't quite focus in time, so I won't show you the blurred visual - it's preseason for the camera lady, too.

Lots of players had new sneakers this year, so look for posts in the future to "guess who" by looking at the sneaks.

And a final plug: if you are on Twitter, follow @InfoManu. Three Argentines (Jalberto is one of them) and I are posting videos, photos, stats, and other info, with Manu's support and authorization. There have already been some terrific videos posted, some showing a very young Manu, even then showing that competitive spirit.