Welcome to the second installment of my very own, JRW-mandated series "Coach Pop Culture Lessons," where I comment on things wonderful and terrible in the world of entertainment, and desperately attempt to connect it to our beloved Spurs.

The first three films in the Mission: Impossible franchise were very much the Ethan Hunt Show. To a large extent, that had to do with the immense star wattage of Tom Cruise overpowering anyone who could possibly co-star with him. Of course, stars fade, or go crazy, or (in the case of Cruise) both. That's why the latest, awkwardly-punctuated installment, Mission: Impossible - Ghost Protocol, directed by Pixar wizard Brad Bird, is refreshing--the focus is back on the Team. Cruise can't do it alone, no matter how many explosions he runs away from in slow-motion.

The espionage/heist genre has always been one of my favorites, because I love watching a great ensemble cast bounce off of each other (the assumption is that it's well-written, because there have been plenty of these that fell quite flat). From The Dirty Dozen, to Ocean's Eleven, to last year's Inception, everyone has a clearly defined role, which the usually insane plan can't succeed without.

So it is with this year's Spurs. Let's have some fun with this one, and cast the key players in a testosterone-soaked, team-driven thriller: 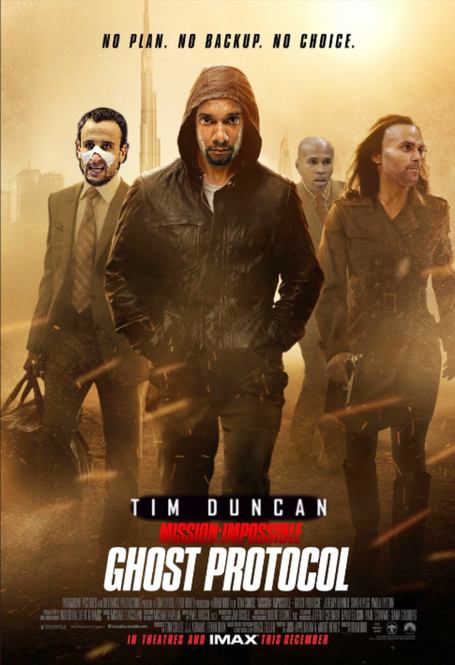 "Your mission, if you choose to accept it, which you better, or I'll bounce you off this team so fast--what are you laughing at, Jefferson?--is to play some g**d*** defense and Pound that Rock™!"

Used to be the #1, but now is in more of a supporting role than ever before. He'll still hit the big shots when it counts, but leaves the most dangerous stunts to the younger bucks.

Leads by example, which means throwing himself into the most dangerous situations imaginable, and relying on his training and wits to survive. Creates major headaches for the Boss.

Responsible for the actual running of the show, and putting the intelligence work in ahead of time to best exploit the enemies' weaknesses. There's no time for personal distractions, but he sometimes falls victim to those.

Having gotten one ear blown off due to a malfunctioning explosive, he's not 100% of a man, but he's good at one thing: rumbling into melees like a wrecking ball. Prone to emotional outbursts and nonsensical ramblings.

He's been taken under the Veteran's wing, and is expected to pick up the slack when he ascends. Has a lot of work ahead of him, and his devastating good looks aren't going to be enough.

Quiet, unassuming, honored to be a part of the team--but get within a thousand yards, and he can shoot a milk jug off the top of your head. Secretly the most dangerous man in the group.

Uses his, ahem, unique skillset to lure opponents into a false sense of security, laying the goofy, public access-quality schtick like layers of a roast beef sandwich, then BAM! Has literally no other skills, and can actually be a liability, but his endearing personality makes him a team favorite.

Uses his elephantine hands to smother the enemy, scale walls, play the piano, swat carrier pigeons out of the air... whatever's needed. Just don't ask him to retrieve your keys from under the seat of the car.

Self-explanatory. Maybe THIS is the year!