After a long post season of watching our cross state rivals win it all (while our beloved Spurs sat at home...or on a beach somewhere, followed by a long off-season of watching guys argue over dollar amounts we can only dream of and seeing no NBA basketball. After all of that and more we are going to see some real life Spurs basketball TONIGHT!

Well sort of, the Spurs notified the press...and us...that Tim Duncan and Tony Parker are not making the trip to Houston. It seems Pop is keeping Timmy and Tony under wraps. Yeah, that's it...they're a secret. Anyway, Gary Neal is also home in San Antonio recovering from surgery and according to his twitter he's not happy about it. Manu Ginobili is making the trip, apparently Luis Scola owes him dinner. Corey Joseph did make it to Houston to play the first pre-season game. 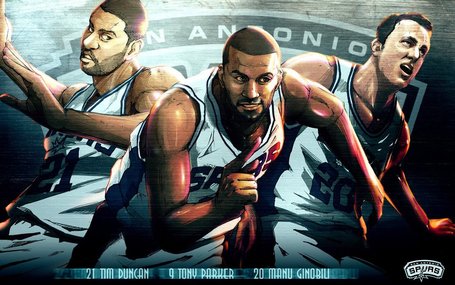 It's SPURS basketball, KIDS! (except only 1 of those 3)
via marioxiao.com

The Rockets tried to make a splash in the short off-season with a trade that would have sent Kevin Martin and Luis "I make Spurs fans cringe" Scola to the Hornets and in return would have seen Pau Gasol in Houston. Needless to say that trade never happened, thanks to the all-knowing David Stern. The Rockets are looking for new blood. I believe the attempt to trade two of their best players indicates that their front office doesn't think the current roster has what it takes to get it done in the always tough Southwest Division.

The Spurs, meanwhile, signed T.J. Ford to address the back-up PG spot and remain mostly unchanged roster wise from last year. To my knowledge, we still haven't heard anything solid on what's going to happen with Antonio McDyess. It's hard to remember after the disappointing playoff exit that the Spurs had an amazing year in 2010-2011. Winning 60+ games and seeing amazing year from the Great Tim Duncan and Manu Ginobili. Needless to say, those two worn down and the rest of the team could not help carry the Spurs through the road block that was Memphis.

Well, that was supposed to be a positive paragraph on why there's hope... that didn't work out so well. We all know this current Spurs team isn't perfect, but they have a nice veteran core that, with the right amount of help from the young fellas, can have a chance to make a run at a 5th title. All of Spursdom will have a chance to see rookie Kawhi Leonard in action as well as 2nd year player James Anderson. Both of these young guys will be key if the Spurs are going to make any kind of noise.

Of course the Spurs old nemesis of Health will be a season long concern. I'm just hoping that if something has to happen to one of our key guys that it happens early and the Spurs can work that player back in. Last year Manu Ginobili's knock in the last game of the year did not help San Antonio in dealing with an already tough Memphis team. Let's hope the Spurs can make it through the pre-season without any injury issues. Let's take a look at the lineups as we get prepared to see our first NBA action since last summer.

I have no idea what the starting lineup will be for the Spurs, or Rockets for the matter, but this is what I'm guessing it will be. We may see Manu come off the bench again this year or Jefferson see his role diminished. At this point, I'm going with what's listed above. The Rockets team isn't awe inspiring, but they did lead the NBA in assists per game, the Spurs will need to keep their hands in the passing lanes...any chase Leonard will get his big paws involved?