Should We Lower Our Expectations for This Year's Spurs?

Share All sharing options for: Should We Lower Our Expectations for This Year's Spurs?

(Note from the editor: Allow me to introduce Matthew Tynan. He grew up in San Antonio, before moving to Alaska to cover sports for the Juneau Empire. He's recently moved back home and has agreed to write for PtR. This is his first front-page story. -JRW)

Parker's comments about James Anderson being the surprise of the Spurs' training camp are perhaps the most satisfying remarks I've heard from anyone around the Spurs to date. Especially, "I think we can expect a lot from him."

Tony wouldn't just say something like that for no reason, would he?

Yes, it's early, but until rosters are finalized there will be an ongoing search for optimism in San Antonio as targeted swingmen fly off the shelves left and right in NBA free agency. I mean, the Spurs lost a potential starting small forward to the Clippers. The Clippers! The Donald-Sterling-owned, Michael-Olowokandi-and-Darius-Miles-drafting Los Angeles Clippers.

I know, I know. Times have changed and the Clippers are an actual NBA franchise now, and I didn't really want to see Caron Butler in the silver and black anyway. It's just the idea of the whole thing: the idea that an opportunity to play for the Spurs may be losing its luster.

But let's not talk about that possibility right now. We can leave that discussion for another day when San Antonio is immediately facing the future without its Big 3. I'm only expressing optimism from now on - optimism in the fact that the Spurs' dependency on the small forward position will not lie wrapped around the balky, bowlegged knees of Josh Howard this season.

Look, I was hoping - more like praying - the Spurs would find a trade partner for Richard Jefferson. Nearly every fiber of my being knew there would be no team willing to take on that $30 million, but I couldn't help but watch and hope.

It's kind of like the time I went to see Cowboys and Aliens. I had almost zero doubt it would be a terrible waste of time, but there was something about the absurdity of the plot that intrigued me, that left an inkling of curiosity in the possibility that movie might actually be good. But it was bad, and I watched the second half of it alone because my friend opted to leave the theater to sit at the Alamo Drafthouse bar instead of seeing it through to the end.

In very similar fashion, the insanity of today's NBA fantasy-league-like trade market left me thinking the Spurs might actually be able to pull something off. Timothy Varner over at 48 Minutes of Hell wrote about an ideal plan that would send RJ elsewhere for a proven big before San Antonio spent MLE money on a veteran small forward to replace him. Wishful thinking? Yes, but I was all on board with that plan. I knew deep down it was almost impossible, but as the plot thickened and the post-nuclear-winter NBA became more unpredictable by the minute, I had to see it through.

But the storyline went from trade, to certain amnesty, to the very real potential of RJ going nowhere. One would hope he has a thick skin, because he'll certainly need it. Jefferson is obviously not the long-term solution at small forward. I mean, even by saying ‘obviously' I'm understating that. But for now you could do a lot worse. Maybe not much worse for the money, but you could still do worse.

The reason Tony's remarks made me all giddy, though, is that I can't help but notice a familiar situation. Last year, James Anderson got off to a relatively strong start to his rookie season. He was shooting the ball well, playing decent defense and not turning the ball over. But then the stress fracture happened, allowing Gary Neal to step in and make his mark, one that led to his major role in what turned out to be one of the greatest finishes in Spurs playoff history.

Now fast forward to this year and this week. Neal finds himself looking at time off the court and the likely scenario he'll miss games due to an appendectomy , while Anderson is catching the eye of teammates and media types. Granted, it's early and this RJ situation has yet to fully play out, but something tells me the answer to the Spurs' wing issues, or at least part of it, does not exist in free agency but in the roster as presently constituted.

If we leave Jefferson out of the long-term picture, then somewhere within the youthful triumvirate of Kawhi Leonard, &erson and Danny Green - or perhaps in the combination of the three - lies the rangy size, athleticism, defensive prowess and shooting/scoring ability of which the Spurs are in such desperate need. Leonard will have his chance at the three and perhaps even the four at times, as there's a reason Pop traded away his ‘favorite player' to acquire the 20-year old Aztec in last year's draft. But there's also a reason why the Spurs took Anderson in the first round of the previous year's draft: the dude can play.

With Gary Neal missing in action, he'll have his chance to prove it once again. And Tony thinks there's reason to keep our expectations high. 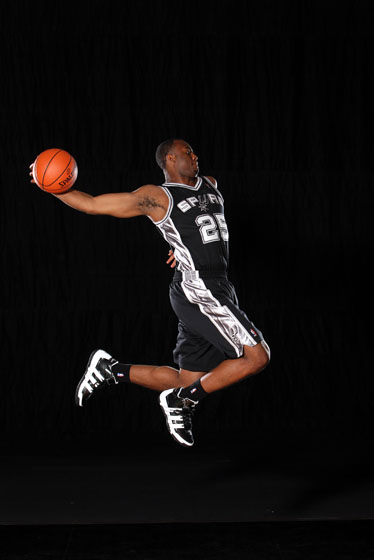