Share All sharing options for: Pop Culture Lessons: Links in the Chain

Welcome to the first installment of my very own, JRW-mandated PtR series "Coach Pop Culture Lessons," where I comment on things wonderful and terrible in the world of entertainment, and desperately attempt to connect it to our beloved Spurs.

Maintaining a franchise is a tricky thing. You have to meet diehard fans' ridiculously high expectations, while keeping things fresh enough that casual fans don't lose interest. Those of us old enough to remember the good times are forever comparing each new iteration to the established "gold standard," and we wonder if we can ever get back there. We survey change with distrust, while simultaneously viewing the status quo with frustration.

I'm talking, of course, about the new Legend of Zelda game, Skyward Sword. 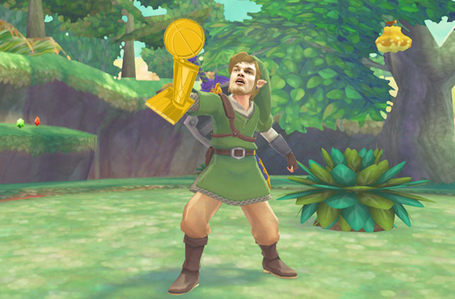 Tiago on the Ultimate Quest--can he match the achievements of his forebears?

If you're a Zelda fan (or simply a child of the '90s), you know that 1998's Ocarina of Time for the N64 is widely considered to be the high-water mark of the Zelda series. For the first time, we had an immersive 3-D world to explore, top-notch action and puzzles, and an engaging story. It changed the video game industry forever, and for all the Call of Dutys, Red Dead Redemptions, and Halos since, gamers haven't really had anything that matched that bolt-of-lightning feeling you got when you discovered OoT.

Fans of nearly any game franchise know that upon release of each new installment, it is usually quickly hailed as "THE BEST EVER," at least until the novelty wears off and its flaws come to light. It happened with 2006's Twilight Princess, and it seems to be happening with Skyward Sword. The way the game is structured, the exquisite motion control, and the new gadgets all appear to be the pinnacle of what a Zelda game should be, even if they come at the expense of some beloved recurring motifs and story beats. Obviously, it has a lot to live up to, and the fans have been burned before. Time will tell what ranking it deserves.

One year after Ocarina of Time was released, the San Antonio Spurs won their first NBA championship, and our lives as basketball fans were changed forever. Since then, we've returned to the mountaintop three times, and while that's been awesome, the years in-between have been full of heartbreak and frustration. Players have retired, been traded, or otherwise not lived up to our sky-high expectations. Last season, we had what we thought might be the BEST TEAM EVER, only to be unceremoniously bounced out of the first round.

The team doesn't look the same; fresh faces like Tiago Splitter, Gary Neal, James Anderson, and Kawhi "KAWNDOR" Leonard are eager to prove that they have what it takes to push that high-water mark of '03 and '05 even higher. Each one a new Link in the chain, from George Gervin, to David Robinson, to Tim Duncan, to... who?

In nearly each new Zelda game, the main character, Link, isn't necessarily the same Link. Some stories take place hundreds of years before, or after, the original NES installments. But they all essentially look, act, and feel like Link should look, act, and feel. The quintessential Spurs of lore are the same way--different positions, different personalities, but there's something inside that makes them, indefinably, Spurs.

Discuss: what franchises--game, film, sports, whatever--have burned you? How do the Spurs maintain their (relatively young) legacy while adapting to survive? And, most importantly, who is the new standard-bearer, and do they have what it takes to meet, or even raise the bar?