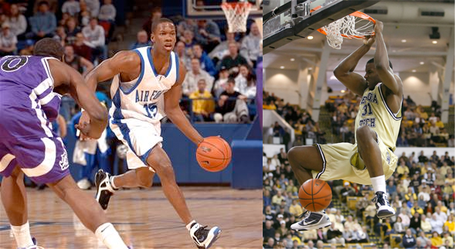 The San Antonio Spurs have announced that they have signed Antoine Hood, a 6'4" guard from the United States Air Force Academy; Gani Lawal, a 6'9" forward from Georgia Institute of Technology; they have waived Devin Gibson.

Lawal was added to the training camp roster after being waived by the Phoenix Suns on December 10, 2011. In his rookie campaign with the Suns last year, he saw two minutes of action against Detroit before suffering a torn ACL and a partially torn MCL in practice on January 6. Prior to his knee injury, he played 10 games with the Iowa Energy of the NBA Development League, where he averaged 11.2 points and 6.0 rebounds. Lawal started the 2011-12 season in Poland playing for Zastal ZG, averaging 16.5 points and 11.7 rebounds while shooting .627 from the field in 10 games. In his final collegiate season at Georgia Tech in 2009-10, he averaged a team-best 13.1 points and 8.5 rebounds for the Yellow Jackets.

Gibson was originally signed to the Spurs training camp roster as a free agent on December 10, 2011.