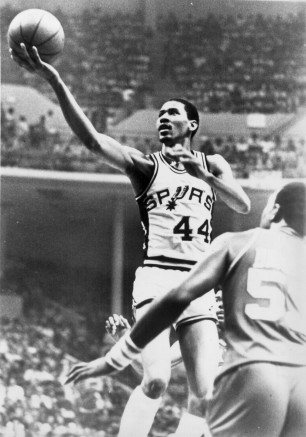 San Antonio, TX – The fourth episode of Spurs Flashback, a 90-minute show highlighting memorable games in Spurs history, will air tonight at 9 p.m. on Fox Sports Southwest. Tonight’s show will feature the 152-133 victory over the Denver Nuggets in Game 1 of the Western Conference Semifinals on April 26, 1983.

The 152 points scored by the Spurs against Denver still stands as San Antonio’s record for the most points scored in a playoff game and ranks fourth in NBA history. The 285 points scored between both teams ranks second in NBA playoff history. The win put San Antonio ahead in the best-of-seven game format and the Spurs would go on to defeat the Nuggets 4-1. The Spurs were led by George Gervin, who recorded 42 points on 17-of-22 (.773) shooting from the floor, while Johnny Moore added 24 points and dished out a game-high 17 assists.

Ferry appeared on the show to provide Spurs fans with a preview into the Austin Toros season. "This should be a good season," Ferry said. "This year I think we have a good core back and Coach Jones is in his second year with the group and I think it will be a better year."

After starting out with 101-96 victory over the Texas Legends on Saturday, November 26, the Toros return to the Cedar Park Center Friday, December 2 to take on the Tulsa 66ers in their home opener at 8 p.m.

Following tonight’s broadcast, Spurs fans can check-out a 10-minute feature called ‘Postgame’ on spurs.com that will feature additional interviews, questions and insight with Elliott, Monaco, Land and Ferry. Due to regional agreements, customers of DIRECTV and Dish Network will not receive the program.