Share All sharing options for: Euroleague Update: The Season Begins [Updated with Poll]

Logos, stats, and scores via Euroleague.net

So, is everyone in need of a good hoops fix after recent non-events in the NBA? That's what I thought. Come on in for some Euroleague action.

While the various parties to the NBA's labor dispute were posturing and arguing amongst themselves and each other, Euroleague started its regular season a couple of weeks back. So, it's time to check in on the results.

[As of this posting, week 3 of Euroleague is in progress, so some teams will show 3 games, and others only 2 games. Check the link above for up-to-date scores and standings.]

Olympiakos lost a lot of talent this past offseason, partly due to the Greek financial crisis. Bilbao, while not the strongest team in Euroleague, returns mostly the same team they had last year during their run to the ACB finals. Since they are newly qualified for EL, the home crowd was whipped into a frenzy never seen at NBA games. Spanoulis' line, even in that context, was pretty bad for this game: 9 points, 3 rebounds, 1 assist, and 3 TOs. I'll chalk that up as a fluke bad game, but OLY got stomped hard.

We'll talk more about Ulker below, but the Greeks were definitely more successful in their home opener than they were at Bilbao. None turned the corner more than Spanoulis, with 22 points, 7 assists, and 2 blocks with only 2 TOs this time. This is the form European fans have come to expect out of V-Span.

OLY put up a valiant fight in this game against one of the top teams in the Spanish ACB league, but came up just short. V-Span finished with 19 points, 7 assists, and 3 boards. He's obviously the same player he has been, but he just doesn't have as much help this season.

Yikes. Pana is really looking like the defending Euroleague champs so far, but Unicaja's qualification for the league is still a mystery to me, as they didn't do so well last year either in EL or ACB competition. Sato, known mostly as one of the best defensive players on the continent, made his presence known on the opposite end in this one, logging 16 points, 6 boards and two assists.

I can almost feel the life being sucked out of the arena in Zagreb. The reigning champs made quick work of their opponents, with Sato again making his presence felt on the offensive end. 13 points, 7 boards, an assist and a block for the former Spur in this one.

Once again, Pana was not seriously challenged in this game. Sato led the team in minutes played, but his contributions to the stat sheet weren't as significant as in the previous two game, as he logged 8 points, 4 rebounds and 2 steals. Not being able to watch these games because of work sucks, but I'm pretty sure Sato's impact was felt more on the defensive end, which is his calling card.

PF prospect Lorbek checks in with 7 points, 4 boards, 2 assists and a steal. But the real story of the game is how easily Barca's new point guard, Marcelinho Huertas, assimilated to the team right away. 17 points, 8 assists(harder to get credit for in Europe), and 5 boards. I mentioned in the Euroleague season preview how I thought he would be a better fit than Rubio for Barca, but wow. We'll talk about Ljubljana more below.

So, former Spur Alonzo Gee plays for one of the lesser Euroleague teams, Asseco Prokom of Gdynia, Poland(I'll add a blurb for them next time). He did pretty decently in this game, but Barca is just way too strong. Lorbek led them with 20 points and a measly 3 boards, while JC Navarro and Huertas gave the kind of quality backcourt performances that they're known for.

As expected, Barca is leading their group, and doesn't look like they'll be seriously challenged until the playoffs begin.

Well, that was a bit lopsided. Lorbek dominated this game, with 24 points on 11-13 shooting(!), and 5 boards. Obviously, he's not a rebounder... but he definitely knows how handle himself around the basket, and he has a sweet jumpshot. Kazan ain't exactly one of the top teams in the league, so this lopsided result isn't unexpected.

While not the same squad that Tiago Splitter led to an ACB title two seasons ago, Caja Laboral is still a force to be reckoned with, with Washington Wizards center Kevin Seraphin taking over Tiago's old role, and Argentina's first string point guard Pablo Prigioni taking over for the departed Huertas. Not too disappointing to lose this one, but I'm sure the fans in Istanbul expected better. Gist reeled off 10 points, 7 rebounds and 2 steals, but had he made even one of his four attempted 3-pointers, this game could have turned out differently. Jerrells added 8 points, but had 2 turnovers and no assists - not good for a point guard.

We already talked about V-Span's performance in this game, so let's talk about the tandem of former Spurs that played for Ulker in this one. Jerrells disappointed again, with 9 points and a 0-3 assist/turnover ratio. Gist had 14 points, 6 boards, an assist, and a steal. However, he also turned the ball over 3 times, which is dealy against a team as experienced as Olympiakos. These guys need to clean up their play to get Ulker out of the early-season hole they find themselves in. Ulker's leading scorer so far is Thabo Sefolosha.... that's not a good sign, since Thabo can't shoot to save his life.

This team can't catch a break. Ulker finally came through with a W, but not without their win being completely overshadowed by an outstanding individual performance on the French side. Nancy point guard John Linehan set a new Euroleague single-game record with 15 assists in this one - remember, EL is a lot more stingy in the way they award assists than the NBA is was. Surprisingly, the EL media report didn't mention Batum's 9 TOs in their promotion of Linehan's performance. Gist had a pretty decent game - 13 points, 3 rebounds, 3 assists and 3 steals. Jerrells finally registered 2 assists of his own, to go with 2 points and 2 boards. Pick it up, Curtis.

Slovenia's sole representative in Euroleague, Olimpija had the misfortune of drawing one of the best teams in the league for their first match. Green was the sole bright spot for Ljubljana in this game, scoring 17 points to go with 4 boards, 2 assists and a steal. 2011 Spurs draft pick Bertans played only 4:39, garnering 2 rebounds.

Yikes. This kind of lopsided loss was expected against Barca, but not Sienna. Green scored 6 points and had 5 boards, but went 0-9 from the field and turned it over 4 times - double yikes. Bertans scored 12 points and grabbed 4 boards, but also had 4 turnovers in 16 minutes. Here's to hoping he gets those TO's under control with more consistent minutes.

This week, Olimpija finally got on the board with a W, thanks in large part to Spurs wingman Green, who scored 23 points on 8-13 shooting, including 5-7 from three. Bertans didn't fare as well, with 2 rebounds to go with 2 points on 1-5 shooting in just over 11 minutes of play. Alonzo Gee checked in with 13 points and 7 rebounds for Prokom in the loss.

CSKA is usually one of the top contenders in Europe, and this year is no exception. Zalgiris made some upgrades over the offseason(including Javtokas and Nuggets PG Ty Lawson), but those upgrades either weren't enough, or haven't had time to get acclimated to their new teammates yet. Javtokas had a rough outing in this one - 4 points, 4 boards, 3 TO's. Lawson was prety lousy, too, so there's that.

Once again, the team's most high-profile offseason addition(Lawson) failed to live up to expectations. As a result, they suffered an embarrassing loss to Unicaja. On the bright side, Javtokas played better, with 9 boards, 5 points and 2 blocks. The Spurs draftee still needs to do more to match the kind of production he gave Valencia last season, but this was not too bad.

So, we already explored this game from the Pana point of view, but this season is a disaster for Zalgiris so far. Sonny Weems and Lawson seem like they were the only players capable of putting points on the board, but that might be because of ballhogging. Javtokas played 20 minutes, and only scored 2 points with 0 rebounds. Unacceptable for a big man.

I'm just going to put it this way: Malik will always be a member of BAM, because he clearly still embodies the BAM spirit. How hard is it to guard him as Milan's 6th man? Let's ask Blazers draft pick Petteri Koponen: 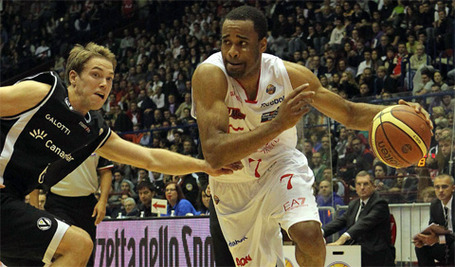 Yep, that expression says it all.

This is an impressive win against last year's Euroleague runner-up, and served as a statement to the rest of the league that Milan's offseason upgrades make them a serious contender. Malik led the way with 25 points, 7 boards, 6 assists, and 2 blocks. Malik finished with the highest "ranking"(however the EL calculates that) of any player in the league. Bourousis also had a strong outing, with 13 points, 10 boards and 2 blocks. Danilo Gallinari made himself useful with 23 points, and Milan pulled off the upset.

Malik was much more tame in this game, scoring only 18 points, and only pulling down 1 rebound. Bousousis checked in with 6 points and 5 boards. The two-headed monster of Hairston and Gallinari again gave Milan some serious firepower from the wings, but it wasn't enough to overcome one of the top teams in the league. Mavs SG Rudy Fernandez led the way for Madrid in the win(stupid Mavs).

This was definitely a disappointing result for Milan. Malik only played 15 minutes in this one because of foul trouble, and didn't even truly capitalize on those, with 6 points, 1 rebound and a TO. Bourousis had a double double, with 11 points and 10 boards. On the other side, Tarence Kinsey led the way with strong support from NBA'ers Sasha Vujacic and Ersan Ilyasova.

Please note: This post is about Euroleague teams only. We'll provide an update on other European teams soon, like Tony Parker's ASVEL and Chris Quinn's Khimki.