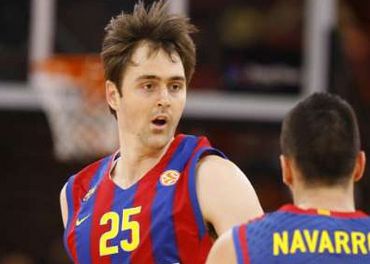 via www.dnevnik.si
Good hair helps with playing for Spurs, yes? Or perhaps I sparkle?

It's that time again. Time to remember that basketball still goes on without the NBA. Come on in for your weekly Euro-ball update.

Ulker has now won 3 in a row after dropping its first two matches, but this one didn't happen because of the contributions of Spurs products Curtis Jerrells(1 point, 1 rebound, 1 steal) and James Gist(3 points, 2 rebounds). Thabo Sefolosha did most of the damage in this one, but hopefully our guys will play better this week.

One of Tiago Splitter's former Caja Laboral teammates, Mirza Teletovic, has been an unstoppable scoring machine over the past few weeks. Unfortunately, the current team can't buy a rebound, and it did them in.

Finally, an impressive win for the traditional Greek powerhouse. Vasillis Spanoulis' 26 points, 6 assists, 2 boards and a steal almost made me not notice the 9(!) turnovers. Almost.

Curious stat for this game(and part of the reason why he won weekly MVP honors): Andrei Kirilenko scored 17 points on 3 shots. Not kidding. CSKA continues to roll, and look like one of the early favorites.

There are no words for this. Zalgiris lost to one of the worst teams to ever qualify for Euroleague. Spurs draft pick Robertas Javtokas had 7 boards and 6 points, which made him about 10 times more effective than teammates Sonny Weems and Ty Lawson.

Here we have our upset of the week. Defending champs Pana, knocked off by a team from Germany, which isn't exactly known for its great basketball teams. Former Spur Romain Sato filled up the stat sheet for Pana with 11 points, 5 boards and 4 assists.

Maccabi is a perrenial EL favorite, and Belgacom had to win a play-in tournament just to qualify for the league. Nothing to see here, move along.

Real Madrid is starting to look like Real Madrid. Barca may have some competition back in Spain this year after all.

This was a bad, bad loss for Armani. They controlled the game and built a big lead during the second and third quarters, then got outscored 30-9 in the 4th. At home. Former Spur Malik Hairston scored 12 points and grabbed 6 boards, while Ioannis Bourousis scored 10 points to go with 4 boards. When a guard(Hairston) is your leading rebounder, that's not a good thing, and rebounding was the difference in this one, especially down the stretch.

Yikes. Danny Green and Davis Bertans were on the receiving end of this week's biggest beatdown, at the hands of a team who should not be delivering beatdowns. Green finished with 8 points, 4 boards and 3 assists, but 4 turnovers. I was following the game online, and he didn't make a single shot in the second half. Bertans grabbed 4 boards to go with 3 points, but commited 3 fouls in 12 minutes. Maybe he just needs to get used to Euroleague play.

This was easily the closest game Barca has played so far in EL. Spurs prospect Erazem Lorbek, in what has become a routine, led the scoring effort for Barca with 14. And in true Spurs fashion, he missed his only 2 free throws.

Siena continues to look good, but we'll have to see if they can get better results than they did last year after a hot start.

Teams with Spurs players in italics

The next competition level below Euroleague got underway last week. Let's get to the results.

Tony Parker was a monster in this game, scoring 34 points on 11-19 shooting to go with 5 boards, 5 assists and a steal. His performance led Eurocup to name him the week 1 MVP. Nando De Colo, on the other hand, struggled a bit, with 7 points on 3-9 shooting, 3 boards and an assist. Tiago Splitter had not yet joined Valencia when this game was played, but will play the rematch in Spain a few weeks from now, so that should be fun.

Europe's second-tier basketball league plays all their games on Tuesday, but we're only going to focus on 3 of the 32 teams, due to the Spurs players taking part.

- Just an additional note on that last game: VEF Riga has signed Da'Sean Butler to a temporary contract, but he will not be with the team in time for this game. Too bad.

I'm going to add a section for the ACB, because (1) it's the best domestic league in Europe, and (2) three of the teams include Spurs players or draft picks. Just like with Eurocup, we're going to zero in on those teams.

On a team full of good players that dominates almost everyone they play, Spurs PF prospect Erazem Lorbek stands out as Barca's best player so far this season. He kept that trend going in this week's domestic matchup, with 17 points on 6-10 shooting to go with 5 boards and 2 assists. I somewhat expect the Spurs to bring him into the fold next summer, provided the lockout is over by then.

After a hot start to the season, Manresa has fallen back down to .500. Spurs draft pick Adam Hanga shot poorly(1-5), but finished with 4 points, 4 assists, 3 blocks and 2 rebounds. I like that he can find other ways to contribute when his shot isn't falling, but it wasn't enough to help his team get the W.

Spurs center Tiago Splitter logged a double-double in his first game with his new club, with 12 points and 10 boards to lead Valencia to the win. Nando De Colo also had a quality performace with 13 points and 5 assists.

Splitter and De Colo vs. Hanga - this sounds like a game to watch, and it's even on at a reasonable hour! Check ACBTV at game time, but I may have some other links on Saturday if it's not there.

Yeah, this one's too early for me(3:30AM here on the west coast). It's also not likely to be much of a game, given that Blusens is currently tied for last place and en route to relegation.

Still waiting for Manu to decide where he wants to play...