My Broken Heart - with Apologies and Thanks to A. Bartlett Giamatti

Share All sharing options for: My Broken Heart - with Apologies and Thanks to A. Bartlett Giamatti

A baseball-loving friend reminded me today of the marvelous love-of-the-game writings of the late commissioner of baseball, Bart Giamatti (now there's a commissioner with a heart and a soul), and it inspired me to adapt his quote to fit this lockout. My apologies, Mr. Commissioner, for playing on your words - my effort is not as poetic, but it is from the heart, a heart which is somewhat broken today. You can read Giamatti's words here: http://mason.gmu.edu/~rmatz/giamatti.html My words are below the jump. 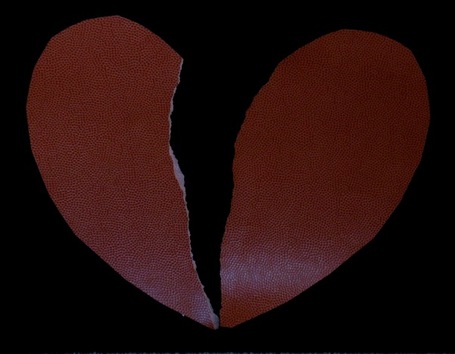 It breaks your heart. It was designed to break your heart. The lockout began on July 1, after a season that had seen the game grow to new heights of popularity, and it continued through the long, hot months of summer, filling the afternoons and evenings with hopes of a resolution, and then as soon as the chill rains come, it stops and leaves you to face the fall alone. You had counted on both sides to bridge the gaps between them, to keep the memory of slam dunks and soaring shots from beyond the arc alive, and then just when the days are all twilight, when your hopes have been raised the highest, it stops. Today, October 29, a Saturday of chilly winds and falling leaves, it just stops, and hopes are fading, if not gone.

It breaks my heart, this lockout. It breaks my heart as though it was meant to, fostering in me the illusion that if the two sides just met one more time the gaps would be closed, that some pattern and some impulse could bring the sides together to make a reality that would resist the corrosion; and because, after it had fostered again that most hungered-for illusion, the games came to a stop, and the promise was betrayed.

And quoting directly from Giamatti: "Of course, there are those who learn after the first few times. They grow out of sports. And there are others who were born with the wisdom to know that nothing lasts. These are the truly tough among us, the ones who can live without illusion, or even the hope of illusion. I am not that grow-up or up-to-date. I am a simpler creature, tied to more primitive patterns and cycles. I need to think something lasts forever, and it might as well be that state of being that is a game." It might as well be basketball.

I love this game. I hate this lockout.