[Note: This preview was written and put together by the great Artis Gilmore. Due to some technical difficulties on my end AG didn't get to publish this himself. Much thanks to Artis Gilmore for tackling this and doing a nice job.]

Spurs and T'Wolves have met twice this season with the Spurs winning both matchups. The first game was forced into overtime and the second was won in regulation by 7. Although their record is atrocious, Minnesota does not have a bad team. They are young and talented, but their biggest problem is closing out games. If Coach Rambis could teach his team some discipline for the fourth quarter, then Minnesota might have a better record. 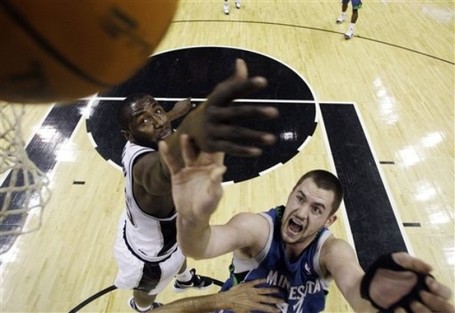 Here is hoping that "the Beast" shows up for this and devours K.Love.

On the other hand, the Spurs continue to fart around until the fourth. Can we put away these young pups before the final two minutes of play? More after the jump...

Pretty much everywhere, it's going to be hot.

That was a nice laugh. Hopefully, that is how I will feel after tonight's game... instead of nursing an ulcer like after the last one. The Spurs will continue to defend their position at the top, but let's not wait until the last second to do it, mmmmm'k?

SG: Manu over illness + Manu angry about recent East roadtrip = Manu going off on the T'Wolves.

SF: It would be great to see R.J. shut down Beasley like he did in the first match up of the season. Beasley went 5-12 and had 11 points in that game. Beasley gets the spur here because he dominated RJ in the last game. He put up 28 points on 50% shooting.

PF: This has been Blair's toughest assignment all season. Love has had his way with Blair in both games, averaging 28.5 points and 20 boards against the Spurs. It would be nice to see Blair come in with some fire and show some of the playing ability he demonstrated against the Laker's bigs.

C: Spurs let Milicic have a great game the first time around and then shut him down by getting him into foul trouble the second. Expect more drives at him again. GOATPUFF dominates at will.

San Antonio has the deepest bench in the league. They will continue to prove that here.

Coaching - Nothing is over until we decide it is!

Pop versus Rambis. Rambis might have had the Slap Shot hair and glasses of the crazy Hanson brothers at one time but CIA Pop can counteract any kind of madness Rambis comes up with.

The only intangible here is who is going to knock down more 3's.

Mojo - I heard of it before the mini-Eastern trip. Maybe it would like to make a come back here.

Spurs are looking to build up another double-digit win streak. Minnesota is looking to win the lottery. No Contest.

Key 1 - Spurs need to get to the line often. Getting to the line serves two purposes in that it allows the Spurs to get the Minnesota bigs in foul trouble and gives the Spurs a chance at some freebies. The Spurs outshot the T'Wolves at the free throw line 29/36 to 18/24 in the first game and the second 33/37 to 20/25.

Key 2 - Keep Minnesota from making shots beyond the arc. Minnesota ranks 9th in the league for 3's made. T'Wolves shot 50% from 3-point land for the 1st game of the series - it went to overtime. The 2nd game saw this % drop to 25 and the Spurs won by 7 in regulation.

Key 3 - Let Minnesota take the shots they want. T'Wolves lead the league in shot attempts at 10 feet or less. They are also at the bottom of the league when it comes to shooting % from this range.