Share All sharing options for: Game #36 Recap: Spurs outlast Pacers, 90-87, to get back on winning track 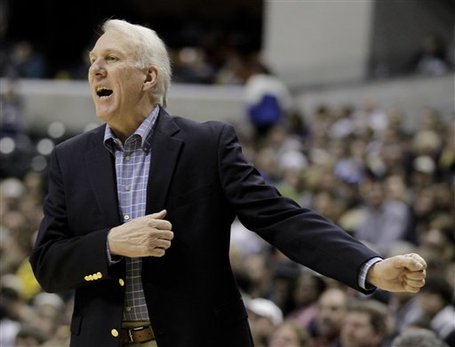 "Hey Salvatore, I got my air guitar on and singing a song about your funeral."

The San Antonio Spurs narrowly avoided a third straight defeat as they overcame a 15-point deficit at the start of the 4th quarter to edge the Indiana Pacers and notch win number 30. The Spurs rode the heroics of Manu Ginobili on the offensive end and Tim Duncan on the defensive end to frustrate the Pacers. Indiana almost ended a seven-game losing streak to the Spurs on the strength of a career night from Tyler Hansbrough, who notched career highs of 23 points and 12 rebounds.

The usual recap, after the game.

Here's an Aussie band to start things. You might remember their sound from 500 Days of Summer.

I planned to have this out earlier, but I found myself staring at the computer for a good 15 minutes doing nothing. So what did I do to fight nothingness? Take a nap, eat lunch, take a bath, then finally got to watch a movie that's been sitting in my hard drive for months. What movie is it? G.I. Joe, the Rise of Cobra. Definitely not Oscar-worthy and not exactly nominated for PtR Critics' Choice, but what the heck, I had fun. And I found myself torn between Rachel Nichols and Sienna Miller, both of whom I would like to date, if that's possible.

After the movie, I took a nap again. What a lazy bum, right? But I guess when you're getting older (although I'm not Wayne Vore old... I'm still a fairly young 27), going out feels more and more outdated, and you'd rather spend some quality time with your bed, wasting hours cavorting with strangers on some basketball-related blog about some boring professional team thousands of miles away. This is the future of man, people. You can't run away from it so all one can do is embrace it.

Some members on the site feel like all the losing (I say "all" even if it's just two losses... look at me, too high above my head with all the winning) is some sort of connived sequences orchestrated by CIA Pop in what looks like a desperate move to avoid All-Star game coaching duties. Of course we all privately believe it's a big joke, but hey, as I said, the older people get, the more they'd just want to spend their free days living inside the wine cellar. If they don't have a wine cellar, they spend their free days building that cellar so they can live in it on weekends. Perfect. 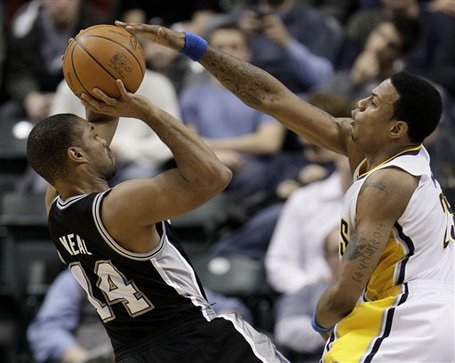 The game was as tough as this shot.

So yes, the forces of funks came together for this game -- the Spurs, wanting to get out of its own 2-game losing funk on this Eastern road swing, colliding with the Pacers, who are funking on a seven-game losing streak to the silver and black. Watching the game, it felt like Pop wanted to really mess with everyone's minds by losing not just two, but three straight! That would've been a true CIA Pop move, eh? But guess who, as always, wasn't in on the plan, or again ignored the script.

How do you deal with adversity in sports? Perhaps the great Bill Russell faced his toughest test when his beloved coach, Red Auerbach, called it quits and turned the reins over to his franchise player to not just be a player, but be a coach as well! Often fumbling to balance his two duties and having to deal with the fact that he just lost the only coach that he trusted, Russell lost his first season as player-coach. But he eventually righted the ship on the next one, distributing his coaching duties to empower other teammates, including assigning substitution duties to a bench player or two. The New England Patriots, burned and scorned on the issue of Spygate, played with a massive chip on their shoulders en route to a perfect regular season while destroying team and individual scoring records along the way. The 97-98 Chicago Bulls, on cruise control all season long after getting bored winning their 5th title, struggled throughout the season and playoffs but came out on top again because... well... they had Michael Jordan, to whom adversity cowers in the face of.

I know it's only a two-game losing streak (losing to Eastern playoff teams, including its top team in Boston) but it's probably the biggest test the team has faced so far this season. If I were you, I'd put a bookmark on the things that transpired this week to the Spurs. Right now, we might not appreciate the necessity of these things happening, but down the road, we'll look back and see if this was indeed crucial to what happens at the end of the season. Did the team come together and manage to plug holes in their game? Or did they fall prey to a false sense of confidence due to their early successes? The game against the Pacers might not truly tell us yet what this team is really made of, but for one night, at least two of our Big Three proved that they still have what it takes to rise above adversity. 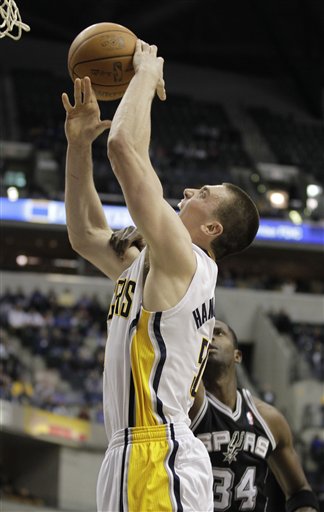 PsychoT went nuts on this one.

I won't speak much about the first half. It was pretty much uneventful, with the Spurs offense practically going M.I.A. (not just for the half but for the entire game, actually), and the Pacers struggling as well. Pop played a lot of small ball, including micro ball with Blair at center and RJ at power forward. This was effective in getting the Spurs out of an 8-point lead as the team countered with a 12-0 attack to take a one-point lead at the half. You could see that after three games in four nights (THIGAFONI), there were a lot of tired legs, especially with the midrange and three-point shots. Thankfully, the Spurs stayed aggressive attacking the basket and fished 19 free throw attempts, which was a huge difference considering the Pacers shot only 4 freebies. That's how you do it on the road.

The second half was a tale of two very different quarters. Indiana came out with more energy, and nobody personifies energy better than Psycho T, who simply couldn't miss from the outside with his jumpers. He looked like a superstar out there, and did his best Blair/Love impression as well by collecting a few offensive boards. The former UNC Tar Heel and National Player of the Year simply had his way, scoring 12 points and hauling 6 rebounds in the quarter. Yes, he was the designated "random player to have a career game against the Spurs", and at this point, I already felt like puking my breakfast. It was getting ugly. It was at its ugliest when the Spurs got down by 15 points, but thanks to a Neal jumper and RJ fastbreak layup, the deficit was reduced to a more manageable 11 points heading into the payoff period.

With a three-game losing streak on the horizon, it was either fight or flight. I was feeling a bit pessimistic about our chances because I thought the last two losses have been somewhat significant psychologically, and made me wonder if this team was made of sterner stuff. But immediately at the start of the quarter, The Nail wouldn't have none of my thoughts as he quickly scored five points to narrow the deficit to just six. From that moment, the comeback was on like Michelle Kwan. 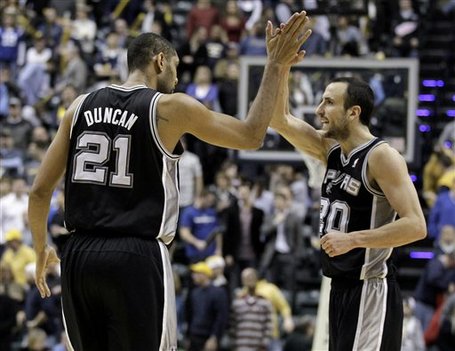 Despite playing ugly ball the past 40 minutes or so, you got to give it to these Spurs' ability to switch into a higher gear. It's not always necessarily two or three notches higher, but high enough to help get the team past its opponent. I thought there were a lot of momentum-killing calls by the referees -- the foul on Neal that resulted into three free throws for Dunleavy, the Pacers' free throw line parade in the waning minutes -- that it seemed impossible for the Spurs to pull through. Too much adversity that it would seem difficult to overcome for a team relying on aging stars and playing on a THIGAFONI.

And then like the true veteran team that it is, the Spurs kept on plugging. When it came to winning time, you know Manu's always going to be there. This time though, he wasn't alone as he was ably supported by the Big Fun himself, Timmy D. Together, they inspired their teammates to play lockdown D against the opposing team, as Indiana made only ONE field goal in the quarter, missing 15 of their last 16 shots. That's HUGE. The Spurs were also lucky that the Pacers missed some shots, but hey... that's why they suck, and of course, breaks of the game. Duncan iced the come-from-behind win by making two crucial stops against improving big man Roy Hibbert.

By all accounts, it wasn't a pretty game and for sure, Pop won't give his players a free pass on this one despite the W. There were stretches when the defense was just average, and the offense looked worse. But in the end, we won, and that's all that matters, right? Was it a moral victory of sorts to still have snatched the win even in the jaws of defeat? It's hard to tell, and these things are best determined in hindsight -- when the Spurs can look back, dig deep into these kinds of experiences and use them to fuel victories in April and May.

For now, I'll say that the team has survived its first litmus test of the season. Still, this is just one of many tests, and over time, we'll continue to observe what this team is really made of.

3 - George Hill -- 16 points, 4 rebounds, 4 assists, 1 block, 2 TOs. I thought of giving it to Neal for keeping us in it with timely baskets, but chose to give it to the hometown kid, who played with great composure throughout the time he was in the game, including in the final stages.

2 - Manu Ginobili -- 25 points, 4 rebounds, 4 assists, 3 steals, 2 TOs. Him coming alive the past two games has helped the team a great deal in staying competitive enough to have a chance to win at the end. We came up short in Boston but this time, Manu made sure he was going home with the W. His defense on Granger in the 4th was also outstanding.

1 - Tim Duncan -- 15 points, 15 rebounds, 5 blocks, 2 TOs. He nearly cost us the game with the late technical foul, but I looked at it as a good sign -- the man just wanted to win. He wasn't abused as much by the younger, taller Hibbert, and helped clean up the glass in the 4th quarter to limit the Pacers to just one shot per possession. Damn, TD, what would we do without you?

Up Next: It's the first of a home-and-home set against our season-long tormentors, the Minnesota Timberwolves. With the way they're playing versus the Spurs, it seems like the T-Pups are finally due for a win. Let's see if Pop can somehow avoid having his team stage another comeback. Also, please limit Kevin Love to less than 15 boards.