The Spurs inbounds play against the Boston Celtics

Share All sharing options for: The Spurs inbounds play against the Boston Celtics

[This is a post for the conspiracy theorist in everyone. It's categorized as "Off the Wall" and is meant to be a carefree exploration into the alternate universe where Pop is infallible. Please enjoy it in this vein. -jrw]

OK, guys, here's my take on the final play of last night's showdown between the Boston Celtics and your San Antonio Spurs. CIA Pop would have preferred to win the game, but when it comes down to the LAST possession against a team that (should the Spurs make it that far) they could possibly meet in the Finals, he's absolutely NOT going to give them even a PEEK at one of our best inbounds plays. What follows is a clip of the play, and my far too detailed deep-dive into the mind of CIA Pop, an imaginary figure that I like to pretend is the coach of my favorite basketball team. 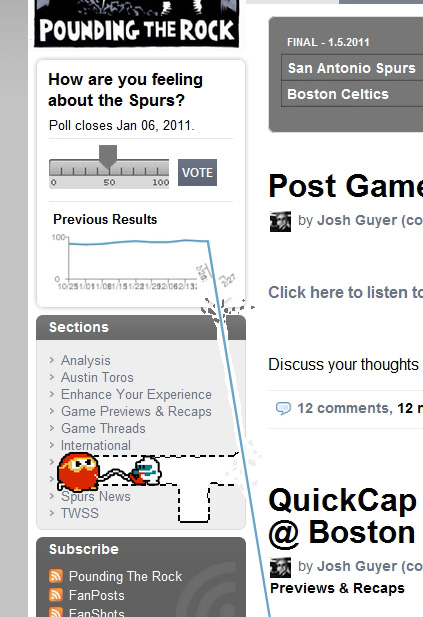 This is a coach that, across the league, is universally respected for (and on this blog nearly worshiped for) drawing up terrific inbounds plays. And we get THAT play with the game on the line. Duncan wasn't ALLOWED to inbounds to Manu Ginobili. How else can you explain The Anomaly being wide open coming up through the lane, but Tim Duncan still holding onto the ball? Got an answer for that one? No, you don't.

The play was called for Timmeh to inbound to Antonio McDyess, who would get it to Manu, who would rub his man off McDyess and take a three. That is all the play was. There were no multiple options, or cutters to draw defenders. No layered attacks to test the defense and put them on their heels. None of the things that characterize a usual Spurs end-of-game inbounds play. There were just four guys standing around watching Manu try to win the game with what turned out to be, after his pump-fake, two guys guarding him.

Anyway, CIA Pop drew up the play. And that was the play that was drawn up; no questions asked. Timmeh is his own man, without a doubt, but he wasn't about to endure the wrath of CIA Pop by getting the ball straight to Manu when that wasn't the play. Not after Manu completely went off the script in Denver. Watch this clip of the game-winner against the Nuggets. See that expression on his face at :09? He's looking at Duncan saying, "Yeah, I know that's not the play CIA Pop drew up. But ... I can't help myself!"]

Now, we can have a discussion about WHY IN THE WORLD, CIA Pop wouldn't want to do more than he did to win this game, but I think it's completely obvious that he was holding back his best plays for later in the season when there's more on the line. If Manu wins it, fine. But he wasn't going to show the Celtics more than he wanted to. He has a precious supply of amazing, game-changing, series-winning inbounds plays, and he didn't want to use one of them tonight. End of story.

But what are you gonna do? It's not like we can replace him!

Maybe it's completely subconscious. Maybe there's a part of CIA Pop that just can't abide the possibility of the team having its focus derailed from its ultimate goal: a championship. He may not go as far as losing a game on purpose, but I believe that something inside him makes him go to great lengths to keep the guys from being distracted by:

a) a streak - remember the Clippers loss? It happened right after a reporter asked him about the streak! And Tony sat for all but about 30 seconds of the entire 2nd half. Conspiracy theorists, hear me now!

b) a specific number of wins - I was standing right there when that reporter asked him about 70 on Saturday. You could feel him thinking, "I will NOT put up with this for the rest of the season."

I'm not saying CIA Pop threw the game, but I have no doubt that he was keeping something back. Intentional or not, something inside Pop refused to let him draw up a better play at the end of the Boston game. And as a result, for the first time in his career, Manu had a potential game winning 3 pointer blocked. But ask yourself a question, if the very last one of CIA Pop's best plays is available for a game 7 in the 2011 NBA Finals (ITGTF: if they get that far) because he refused to use it against the Celtics in January, wouldn't you say it was better to save it?