Share All sharing options for: Point by Point, Spurs building a Juggernaut

[Note: This was posted a couple of days ago (hence the delayed record) but was quickly buried under an avalanche of posts, so people might have missed it. It's very much worth the read. -- s&bd]

For fans, expectations are usually hard to manage, no matter how your team is doing or what their long-term prospects. The Spurs have just won three straight against potential playoff opponents, and what was a good start has turned into a pertinacious lead over Western rivals. Plus, it looks great and is fun to say! What is the Spurs' record? Why, twenty-nine and four, sir! Below the jump, I go ahead and do what Pop and the players will never do, and project our amazine start forward to try to get some sort of reasonable expectation for the remaining forty-nine games.

The four is the continually remarkable part of the record. Twenty-nine wins, yes, I can somehow process that, but only four losses? Four losses into a season old enough to have my girlfriend complaining and asking, weekly, how many games are left in the NBA. Four losses at this point is like if Odysseus got past forty percent of the freaky-deakies trying to kill him and had only lost four sailors. It's the four losses that would inspire me, if I were still nine years old and trying to read the standings out of the San Antonio Express-News, to run the numbers and find what kind of pace that would put us on for the full season.

At 29-4, extending our win percentage to eighty-two games puts us at slightly better than a 72-10 stride. Even without knowing the significance of that mark, nine-year old me would know not to dare hope for a record like that. Strategically, I could set my heart at a more modest 67-15 wish and have more reason to cheer Lakers' losses. It would still be a record season, just not the record.

It would almost certainly be enough to get home-court throughout the playoffs with room to rest the last few games. So 67 and 15 is pretty much the most Spurs fans should hope for - history, home-court, and a game or two of rest for the vets. Anything else is just greedy.

Before we break out the more realistic projections, let's establish a lower boundary - the record we would end up with if catastrophe fell on us tomorrow, all our lucky breaks turned sour, and we sink into the murk like Atlantis. Finishing the season at 50 and 32 and having no home court at all would be a disaster of this scale, and requires us to go 21-28 the rest of the way. It's also the season prediction picked out for us by ESPN.com's Bill Simmons (even though we were 12-1 when he wrote it). 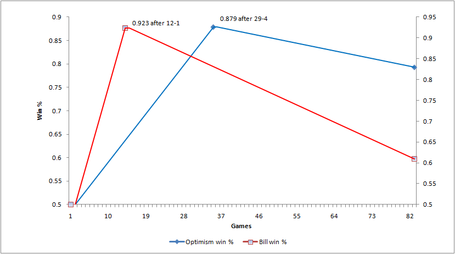 There's another simple way to predict the rest of the season using 2010's games, and it should give us a better estimate than nine-year-old Jacob's method, or the expert analysis of ESPN.com's Bill Simmons. The Pythagorean Win% method will tell you the typical win percent of a team based on the final scores over a stretch of games. Projecting that percentage forward is the standard first step in predicting a team's final performance mid-season. The formula is fan-friendly; you just take points scored and allowed from somewhere like B-R.com and plug:

So this dude Pythagoras expects the Spurs to have won .773 percent of their games, based on how many points they've scored and surrendered. .773 would put us right between 25-9 and 26-8; also what the record would look like if our 10-1 record in close games were a mediocre 7-4 or 6-5.

How is it that number-crunching the scores can predict future W-L record more accurately than actual W-L record?

There's one little adjustment to make before putting Pythagorean Win% up on the graph. The Spurs have played 21 games at home and just 12 on the road. Since home court advantage has a consistent effect on team efficiencies and final scores, we should adjust out the AT&T Center Advantage before the projection. The adjusted Win% is .749. 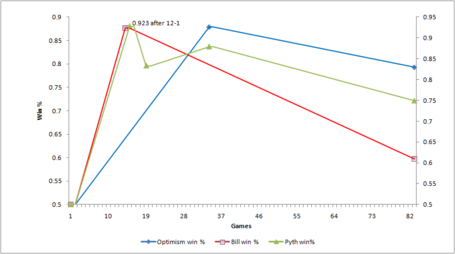 I was expecting the Pythagorean projection to end up closer to the optimistic side of things, but I didn't expect a projection of between 65 and 66 wins (!!!), which hits the trifecta of history, home-court and rest that I mentioned above.

Now, before Chris Quinn (PtR's mascot hobbit, Perequinn Took) gets worried about significant rings and complicated disposal instructions for same, I should mention that this method is probably still overstating our chances for a historical season. It's not a matter of strength of schedule, as the Spurs have just gotten through with some tough opponents that have raised their average competition back to, well, average.

What is a little optimistic, however, is assuming that we can keep beating opponents by the 8.9 points per game that's in today's snapshot, and is the basis for our projection. We've managed to avoid any injury whatsoever to our key players, while receiving some good luck when it comes to injured opponents. We played Dallas without Dirk, The Warriors without Ellis, The Nuggets first without the role-players and then without Melo. Our +8.9 points per basketball contest is likely inflated by this good fortune.

Plus, maintaining a margin like that is simply rare. The Spurs, Celtics and Heat are all playing at a juggernaut level measured by average point margin, the kind of dominance it's hard to maintain over a full season. A bet on the Spurs finishing the season +7 or 8 per game and winning .725 or .700 of the remaining games (to bet on us bagging 63 or 65 wins, in other words) is probably a safer bet.

The last three teams to finish the season with an average margin of eight or better were the '09 Cavs, the '08 Celtics, and the '07 Spurs. These are teams that nobody could keep up with in the eighty-two game season and nobody wanted to face in the playoffs. If we maintain our domination on a possession to possession basis, regular season wins will take care of themselves, and Popovich will be able to begin planning for the real season.