Photos - No Lift-Off for the Rockets Tonight

Share All sharing options for: Photos - No Lift-Off for the Rockets Tonight

If you've ever been to a Rockets' game, home or away, you know their fans always cheer loudly during the National Anthem's refrain ". . . and the rockets' red glare". After an initial lift-off that saw Houston up by one after the first quarter, the Spurs went to work, winning the second and third quarters by 3 each before turning it on in the fourth to extinguish all "red glare" from the Rockets, 108 - 95. And Timmy seemed bored with the whole thing at one point as he seemed to consider a novel defense to stop Houston from scoring: 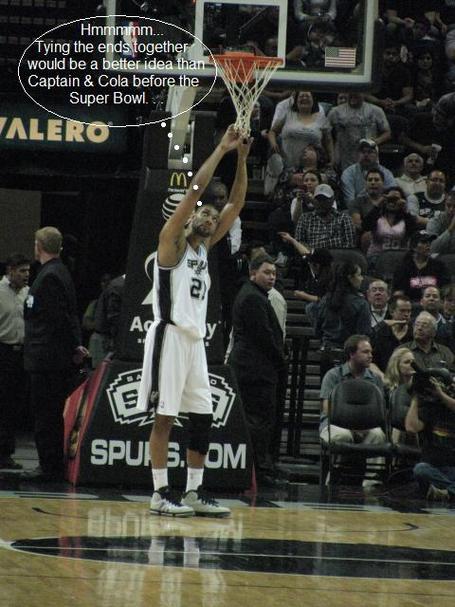 Fabricio Oberto was in town and enjoyed watching good friends Manu and Scola on the court. The three enjoyed a dinner the night before and swapped a few more stories before the game. 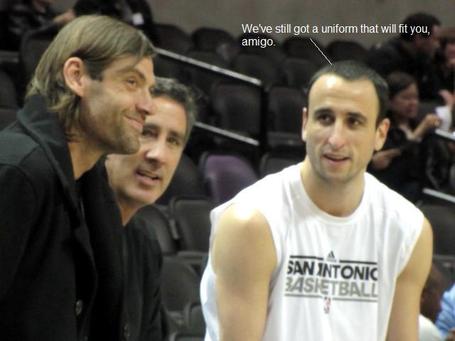 The Coyote paid Fab a visit in the Spurs' box and they improvised a funky kind of air guitar duet. The act was shown on the big screen in the arena and Fab received a nice ovation. He appeared very relaxed, and a bit below his playing weight. He willingly posed for photos, signed autographs, and dispensed hugs. I asked him when his wine would be available in the US, and he said "soon". Such a nice guy. 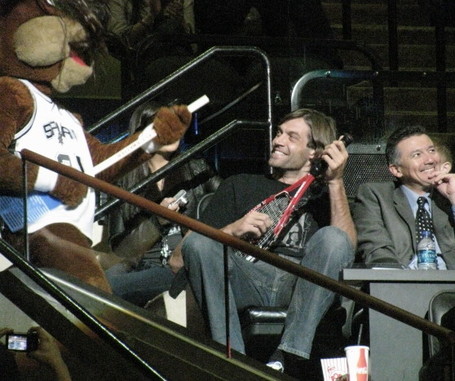 Manu was The Man tonight - and Kevin Martin had a long night trying to guard him. In the first quarter, Manu faked him out and drove the lane, prompting Sean Elliott to say, "Aw, Manu, don't do that." In the fourth quarter, Manu shot two threes over him, even though Martin played him close. 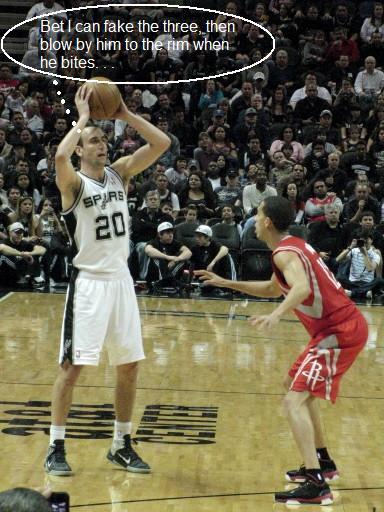 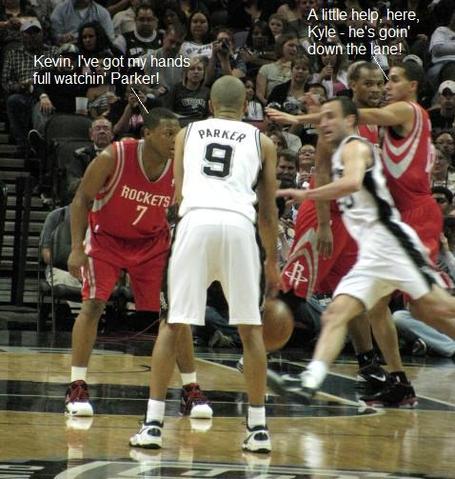 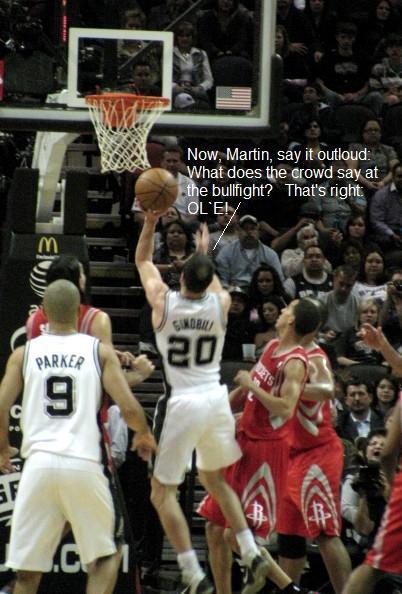 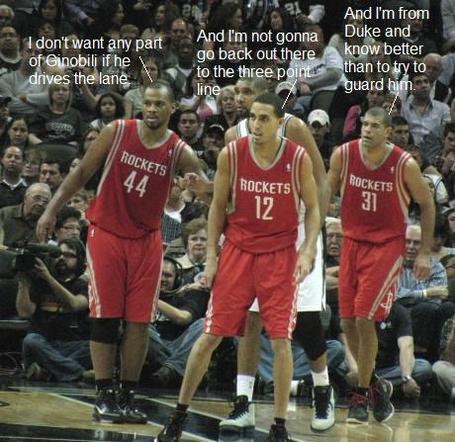 DeJuan was DeBeast again - dunking as though he was auditioning to be included in the All Star Dunk Contest. 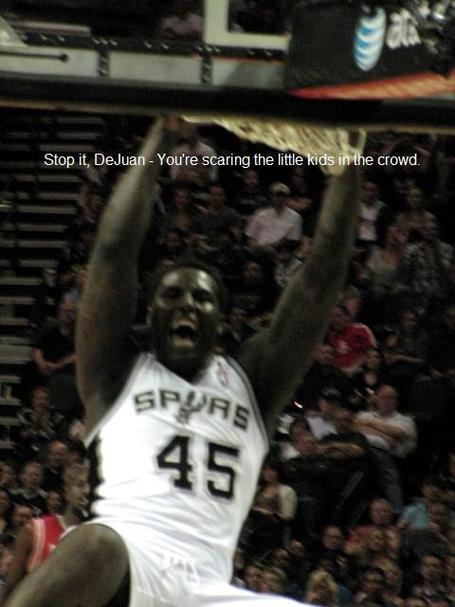 Tony operated within the paint at will, putting in 17 points for the night - with one corner three as well. Uncharacteristically, he got in foul trouble with five fouls. 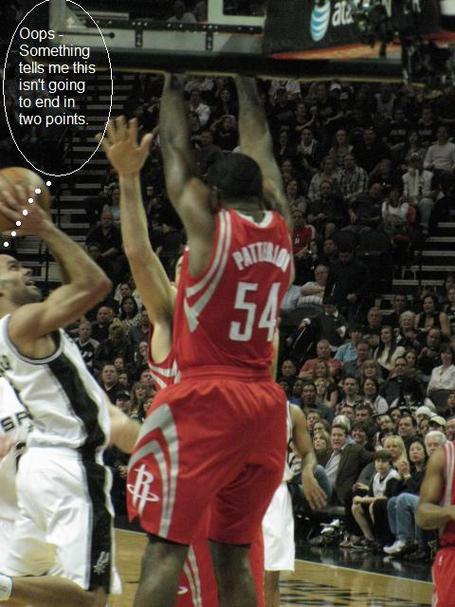 James Anderson entered the game late in the fourth quarter to nice applause from the fans. He grabbed one rebound and missed on a three before scoring on a long two pointer in 3 minutes of play. He appeared a little "hyped-up" but settled down after he made the basket. 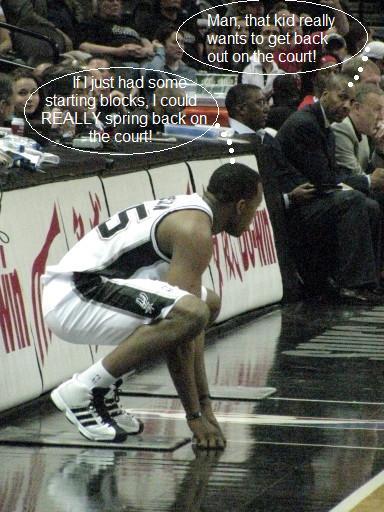 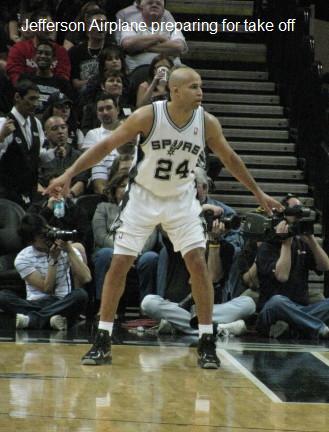 And then there are the photos just for fun: 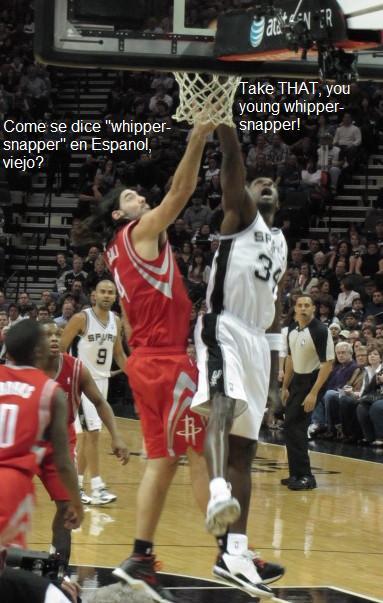 Tony came out of the game after picking up his fourth foul, and Chris Quinn was quickly dispatched to the far end of the bench. 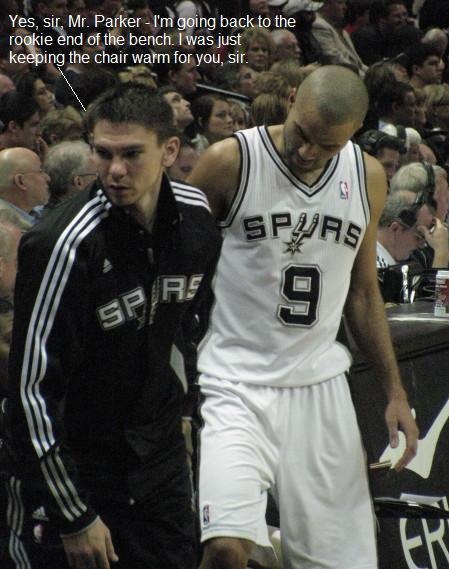 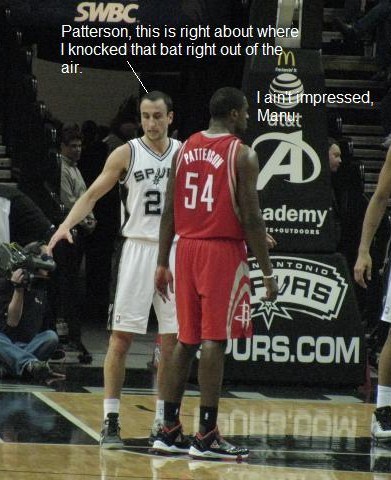 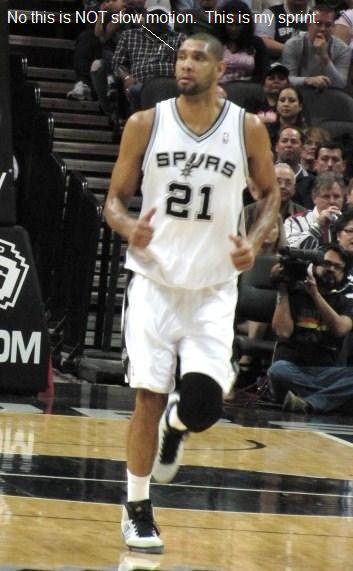 For those who care, the draw was held in Argentina this week for the FIBA America's tournament this summer. The top two teams will qualify for the London Olympics (USA is exempt because of winning the world championship last summer). The two top teams should be Brazil and Argentina, and they ended up in different pool play. 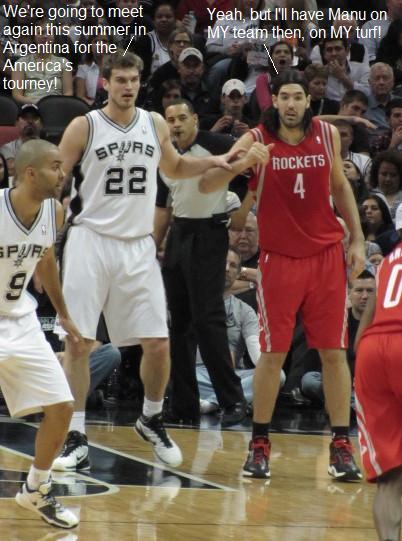 Pop was calm most of the night, even though he barked at Timmy as a time out was called in the third quarter for his lack of defense on Scola. 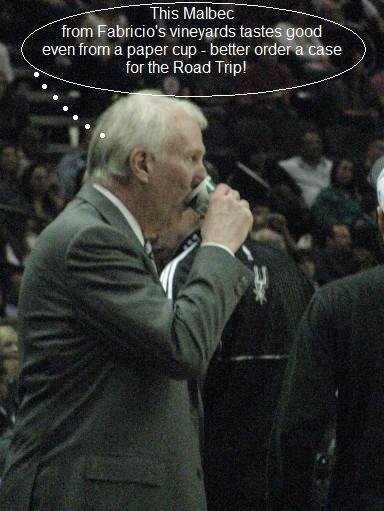