His Man Friday: Another £er on the Scene

Share All sharing options for: His Man Friday: Another £er on the Scene

In an effort to help mitigate the strain of travel on Pounding the Rock’s boss man and to provide an additional, and possibly quirky, view of the Spurs game experience, I will be attending nearly all of the remaining Spurs home games as a member of the media. In late October, jollyrogerwilco shared his experience and thoughts on his introduction into a world where a Spurs fan "can pretend to be a media maven while trying not to embarrass anyone and learn the ropes. It's a land of catered food and bland decor where a small piece of paper is the most important thing you wear." Now, in an amazingly short full-circle, it was JRW’s turn to teach another Spurs fan the ropes. 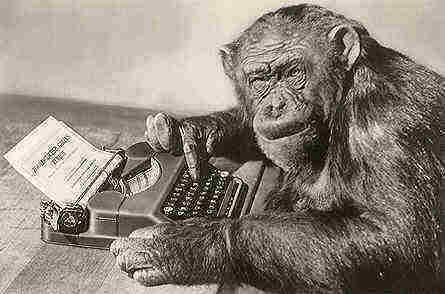 I am not an individual who is normally burdened by pressure. In fact, I am quite familiar with pressing situations. But sitting courtside during a Spurs pre-game practice for the first time?

My right leg was literally bouncing off the floor while I watched Tiago Splitter working with Chip Engelland and George Hill sinking shots in the far corner. My eyes lit up when names such as Bill Land, Sean Elliott, Richard Oliver, and Bill Schoening started to go about their pre-game work in front of me. I was enveloped in a wave of talent formally admired only from a distance, a new babe in a banded collar leather jacket surrounded by veterans donning iconic uniforms and sharp suits.

The crushing feeling of unfamiliarity wouldn’t last long. Each individual I was introduced to, both media and Spurs staff, greeted me kindly and with respect. This does wonders for a geek-ing neurotic desperately trying to gather himself. I also cannot properly detail to you how following the lead of a person such as JRW helped ease my mind. By night’s end, when I was standing no more than a few feet away from an exhausted Manu Ginobili, I was no longer a nervous wreck.

Now if I could somehow overcome my old habit of speaking backwards, I’d be ecstatic.

I will spare you the details on the behind-the-scenes process since an accurate description can be found in JRW’s 10/29/10 post. I would, however, love to share a few moments that had me grinning from ear to ear.

Are you still drunk?

This was Coach Popovich’s flabbergasted response to a reporter’s repeated inquiries as to his thoughts about the Spurs reaching 70 wins. The brazen blogger/reporter, who I’m assuming was there to cover the Thunder, was pretty much dominating the pre-game interview. Based on what I heard and saw, this unidirectional questioning seemed to irritate a time-restricted Pop, while entertaining several of the big names in San Antonio sports media.

The Tunnel: I hope every Spurs fan gets to enjoy one day. I have watched a Spurs game from about nearly every angle in the AT&T center and, in my opinion, there isn’t a seat in the house where you can’t enjoy the action. That said, there is nothing quite like walking out of the event tunnel, passing fans draped over the edge waiting on their favorite player (not some talentless schmuck), and entering the base of 18,000+ people ready for tip off.

But the best moment of the night though was one that was beautifully captured by the lovely janieannie. 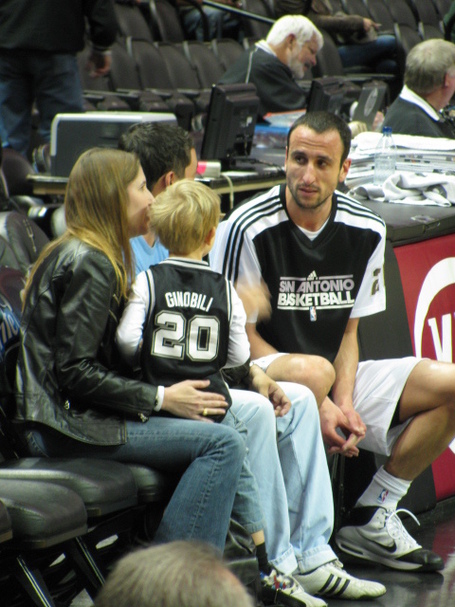 Queness, Lil Q, LatinD, and some player. Not sure who, though I think he's pretty good.

It is an awesome sight to watch someone, who is incredibly admired world-wide, sit down with a couple of fans for a private conversation. I swear I could see the smiles burning through the back of both LatinD’s and Que’s heads.

Side note: I really enjoyed meeting both janieannie and LatinD for the first time at the pregame gathering. I was fortunate enough to meet Que last season (and she didn’t hit me with a bat so I must be an alright guy). Including JRW, it was an awesome cast of characters to spend lunchtime with. I hope another opportunity for a PtR gathering is not too far down the road.

Just what I will bring to the PtR table is still being constructed. Ideas have been kicked around and a few have already been proposed to the Spurs’ media personnel. We have high hopes and expectations for the future of PtR and I’m excited about the opportunity to make a positive impact. With the road heavy schedule about to start, I will have ample time to build something worthy of the time to be spent in the Spurs’ home. There is a plethora of knowledge for me to take in but I hope that the future work that I bring will both enlighten and entertain.