Share All sharing options for: Game #45 Recap - Spurs 113, Warriors 102: Where the score nearly became an afterthought

How do you get a world-wide group of Spurs fans to collectively hold their breath and loose focus on an in-progress game? Send one of the Big-3 to the floor clutching any joint area in pain. That this actually happened to The Big Fundamental - BigFun, GOAT PUFF, the franchise captain - just about ruined a road trip that had not yet advanced to the actual RRT portion. Fortunately, Tim Duncan just needed a few moments plus a halftime break to again feel physically stable, while perhaps distracting Pop from his pending All-Star break duties. Anyone else think TD will see at most a handful of minutes at the A.S. game? This also means my recap can be about the shiny results at Oracle instead of an examination of my devastation that I typed while sitting intoxicated in the dark.

The local Warriors studio pre-game show was highly complimentary of the Spurs, even calling the primary bench threats "The G-Men: Gary Neal and George Hill." Their announcers opened by stating that when playing the Spurs you "measure yourself against the best in the NBA" and that the Spurs "are a buzz saw at home and on the road." Why thank you, kind sirs, for noticing the greatness. This was billed as the two best backcourts in the NBA going against one another. The Spurs would lose that point battle by one (38-39) but that is in fact a win considering the Warriors' over-reliance on their guards to score. Oh, and did I hear correctly? This game opened the longest Warriors home-stand in nearly 50 years? How is that possible? (I checked and apparently it's their longest since the 1964-65 season).

An effort was obviously made to get RJ some early shots. The opening play of the game was designed for him and, as a Pop designed play should do, it left Jefferson wide open under the basket for a dunk. Unfortunately he slipped and had to pass. He did make a 3-pt shot moments later but the early missed opportunity contributed to the Warriors grabbing the early lead, as they often do at home. Andris Biedrins & David Lee had obviously watched the Spurs-Hornets film and played as though they believed they could duplicate the effort of their Hornets counterparts. Biedrins opened with two blocks, setting the stage for an Okafor repeat. David Lee had 14 first quarter points in playing the part of David West by making every long jumper. Please, I was thinking, not a repeat of Saturday. Fortunately the Spurs brought their offense tonight. Tony went for 9 with an assist and created as much paint exploitation as a predatory filmmaker let loose in a Sherwin Williams. Parker's aggressiveness would benefit the Spurs for the entire game. Also, that Duncan fellow led the team with 10 points.

A tied game after twelve minutes was not all bad, considering that Golden State was shooting 61%. Having watched most Warriors home games this season, I'm used to seeing them shoot well early and keep it competitive in the early going, regardless of opponent. Their lack of depth can be exposed if a team forces them to earn open shots on one end and expend energy defending on the other. Outside of Ellis, most of their players will show tired legs late if they are made to work. Let's see if that strategy works for our guys. Step One: getting that shooting percentage as far under 50% as possible by game end.

So there was this incident around the 4:45 mark. A running jump shot by Neal put the Spurs ahead 51-48 but all attention went to Tim Duncan, who was lying nearly motionless on the floor and grabbing his left knee. Yes, the one he wears a brace on. I will not include a photo as I need no more of that image. Fortunately he was able to get up and, after being assisted by Blair, was able to put weight on both legs. Classy applause from Warriors fans was appreciated. Timmy made his way to the bench first and, after a bit of a sit-down, to the tunnel that takes a road player on the long route back to the locker room; presumably to walk off whatever the heck had just happened. As all in the PtR game thread feared whether we'd see TD back in uniform this month, the remaining Spurs on the floor exploited another on-going Warrior weakness of late: the inability to finish the 2nd and 3rd Quarters effectively. A three point Spurs lead ballooned to a game high nine points thanks to completing a 17- 5 run.

The seven point lead at the half was secondary to Duncan Watch 2011. Yes, the GSW shooting percentage had fallen to 54%. Manu was now the Spurs' high scorer and the team was +10 on rebounds. But none of this mattered until some word of good news would flow from the Spurs' locker room. As tight-lipped as our organization is, we likely wouldn't hear anything even close to a definitive answer until well after the game -- hey wait a minute. Duncan's warming up and taking part in the halftime shoot-around! Word spreads that Timmy told Sean Elliot he's okay. Thank goodness! Now he could rest -- hold on, is he seriously going to open the half in the lineup? Is Pop aware of this?!

If you were just now tuning in, you were quite lucky to avoid the previous 20+ minutes of anxiety. Everything now looked normal, from the unit on the floor to the Spurs' lead. Ball movement was at its best in this quarter, as assists were recorded by Manu, Timmy, Blair, Tony and Dyce. Seven different Spurs scored. The lead grew by five points up to a game high of twelve and you could tell that the crowd was beginning to accept a familiar fate, as the Spurs once again were slowing squeezing the life out of their team and the arena, one rebound and well-executed possession at a time. 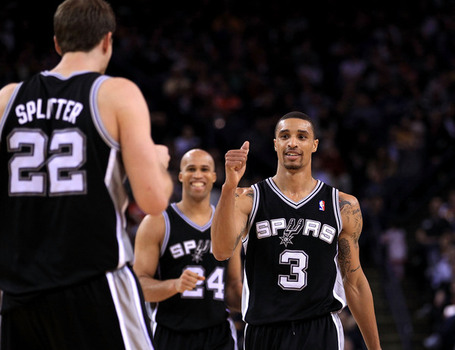 The slow but steady rising of Manu began during the bridge of the 3rd & 4th Quarters. He scored some points and dished some assists but it's more in watching the game that he felt in control during his time on the court. An awesome assist was just missed when Tiago was unable to finish at the rim, a miss that temporarily ignited a mini Warrior run that cut the lead to ten. It would get no lower than nine, as our talented Frenchman finished what he began in quarter number one, slicing and dicing a now tired and scrambling Golden State defense. It should be noted that RJ, who could have gone thirty minutes of game time without playing and it would not have been noticed, appeared in his new Captain Late role by taking and making three shots this quarter. Each bucket followed a Warriors score, effectively extinguishing any kind of a rally from the home team. RJ2.0 took his shots, two jumpers and one aggressive drive into his defender, with the kind of confidence normally seen in a player who had been in rhythm all game. Whatever works, Richard. Better to be invisible through the first 36 minutes and show up for the 4th, than to mimic the younger version of a certain French point guard, and disappear at the end of games.

By the time Quinn entered for Duncan (a hobbit at PF?) the lead had swelled to sixteen and the memory of Timmy clutching his knee was as distant as a forgotten nightmare. The box score shows no evidence of the scare, just a ho-hum 16-7-3 in 26 minutes. The game finished at 113-102, which meant another season series clinched. No one played over 32 minutes and this was done without key reserve Bonner, who missed his fifth consecutive game. And look at that, the GSW shooting fell to 46%. We played some defense after all.

- As noted, RJ had only nine points but six came in the 4Q. I'd like to see him get shots early in the game that are not 3-pointers. Those will always be there, but the mid-range game and slashing are where the rhythm begins.

- Pop will be coaching the West in the All-Star game. In LA. Awesome. May he and his true squad return in late May to dismiss the home purple and gold team.

- When Tiago first checked in, GSW broadcaster Fitzgerald stated that after being drafted, Splitter marinated in Brazil for three years. I love that use of the term. A tasty side of Tiago to go along with tilapia.

3 -- Antonio McDyess - 14-Pts 10-Reb 1-Ast. The Dyce-man made two buckets after Timmy's early halftime departure, made GSW pay for not rotating to the p&r roller, and controlled the boards. He even threw down a dunk for good measure. This double-double shows he's warming up for the West coast swing.

2 -- Manu G. - 20-Pts 4-Reb 7-Ast 1-Stl. Made 3/4 from behind the arc, contributed to good ball movement, did not force as many shots as he has done of late, and helped extend the lead into the 4Q just beyond any realistic reach for the Warriors. He also spent many minutes guarding Monta Ellis, no easy feat.

1 -- Tony P. - 18-Pts 3-Reb 11-Ast 3-Stl. Brought the energy and efficiency early, maintained a good tempo, then carved up the Warriors late. He was the star of the opening and closing quarters, and thus number one on this night, a double-double. Tony does so well when playing these fast paced teams for whom defense is an off/on guessing game.

An opportunity to sweep the two games in Utah this regular season, clinch the season series against the Jazz, and create some momentum heading into the remaining ten game / twenty-one day stretch.