Game Recap #44: What happens when you mess with a hornet? You get stung.

Share All sharing options for: Game Recap #44: What happens when you mess with a hornet? You get stung.

Yes, I ripped the title from a Green Hornet quote. Saw it last night, and ATM would rather talk about that than this game.

And the movie wasn't much better.

The Hornets beat the Spurs by a lot. A whole lot. (96-72) Instead of in depth analysis, I think I'll just go with Pop's favorite recap strategy: hack-a-cap.

Some music to get you started off with:

I had planned on doing a "good/bad/ugly" style of recap...Not much good to take from tonight- and I'm not even being pessimistic, I don't think. Between our guys playing major minutes last night and their guys all playing less than 30, I'm not sure there is much we can take from this game- good or bad.

In the first quarter, we came out flat, but we played pretty good defense. I mean, we held them to 13 points.

Too bad we only scored 12. To me, it seemed like a combination of good defense from them plus us being tired. There were a few times we executed and got open shots, but missed them.This trend continued until the third quarter, when they ran off (I think) 21 straight points to put the game away.

Tim was off. Manu was off. Tony dribbled straight into their defense a few times, but shot 50%. Blair was a non-factor, but so was everyone off the bench not named Larry Owens. Neal was off, Hill was on and off. This game was just ugly.

Larry Owens can play. Solid pick up. Not sure if we'll keep him longer than the 10-day contract, but I wouldn't be opposed to it. He's got length and brains and a solid overall game. He's at least worth sending down to the Toros once we don't need him.

Blair had a pretty sweet dunk...

Tiago is listed as our "Top Performer" at the ESPN box score. Good for him. He played alright- nothing special and obviously didn't make much of a difference (in the outcome of this game), regardless of who he was paired with, but he played a solid game.

That was about it.

Like I said...we can't take too much from tonight. Our guys all played a ton of minutes last night, and we couldn't buy a bucket. Ever wonder why we created acronyms like SEGABABA? Aside from them being seriously fun to say out loud (seriously, try it. You'll feel better), it's because situations like that can and do have a major impact on performance- and not just on ours, but on every team in the league.

That being said, there is NO excuse for being out rebounded by twenty four. That's absurd.

David West scored pretty efficiently off of pick and pops. If we have a defined defensive strategy for defending that, it didn't show tonight nor has it shown...ever that I can remember. To me, it makes sense to just switch any time they run a pick with David West. I don't remember him ever being a dominant back to the basket player, and I also think it is much easier to double him if he tries than to have the big hedge hard on the screen then recover to keep West from shooting. That's my two cents.

The Spurs shooting, especially from deep. We need Bonner back, ASAP. 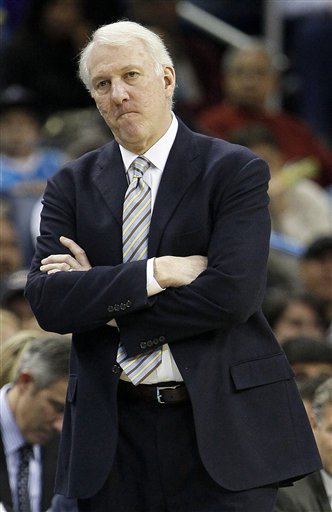 3. We didn't have three good players...So Star #3 goes to...Pounding the Rock! Thanks for being there to constantly support the team, comment on things intelligently, and generally be smarter, funnier, and better looking than all those other teams fans. We're a bunch of winners, even if tonight our team wasn't.

2. Larry Owens- He's good. Not NBA starter, but he's got potential to be a good role player.

1. Tiago Splitter- if the ESPN box score says he was our top performer, who am I to argue? ESPN is never wrong. Shot 70% from the line, tied for a team high six rebounds. But like I said- he didn't seem to stand out much, which one could argue is either a good or a bad thing.