The best "bigs" on the floor at the AT&T Center were wearing the white uni's last night. Duncan and Blair combined for 39 points, 29 rebounds and 8 blocks. The "bigs" in blue and orange, Stoudemire and Turiaf, faced a fired up Spurs team that challenged the Knicks on both ends of the court. The Apostrophe found himself in quick foul trouble and went to the bench in the first quarter. He did not score his first points until around the seven minute mark of the second quarter. The night was fun, and so are the photos - enjoy! 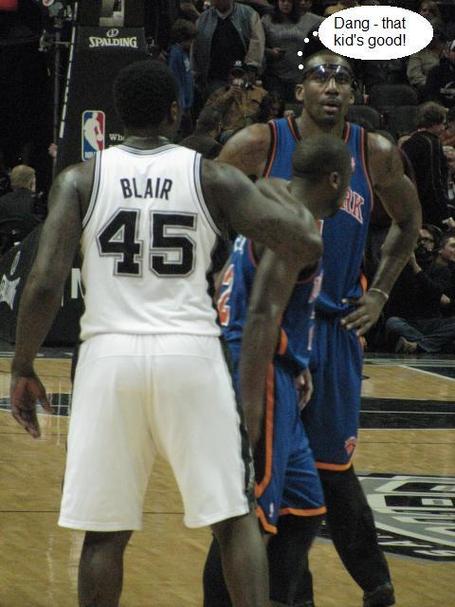 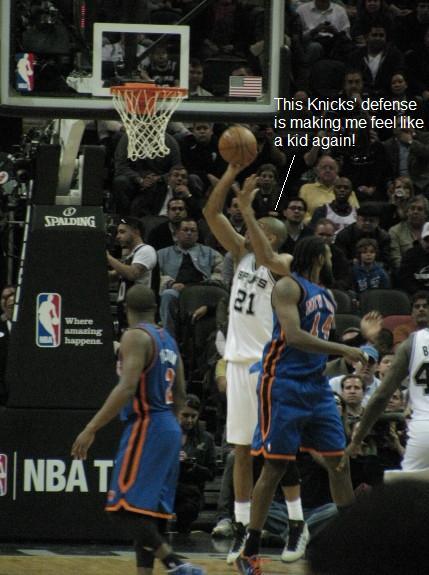 I watched a replay of the game and heard Sean Elliott comment on how, in spite of what Amar'e says, he is still not playing defense. 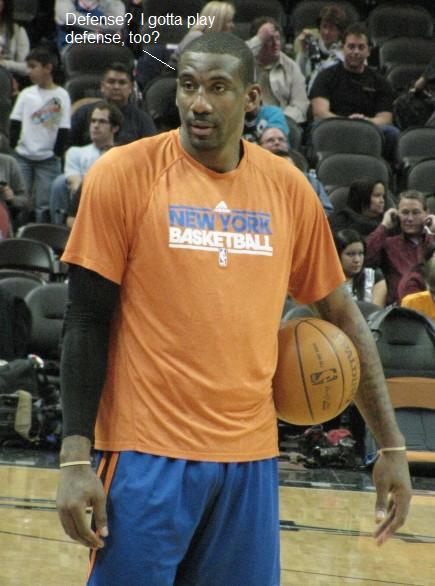 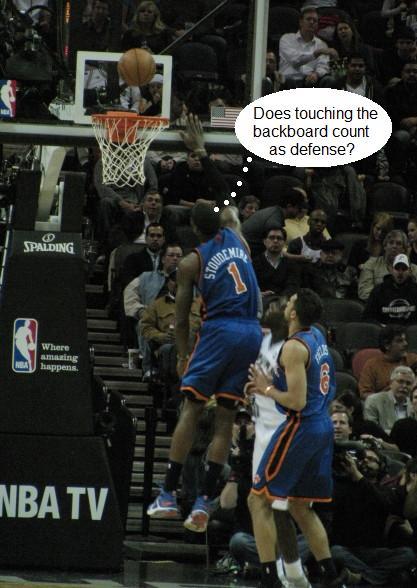 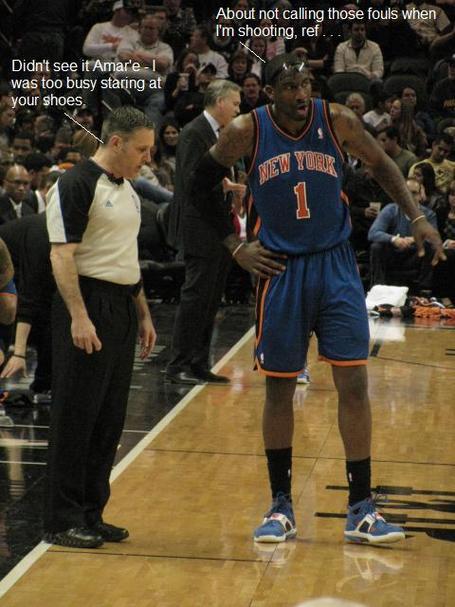 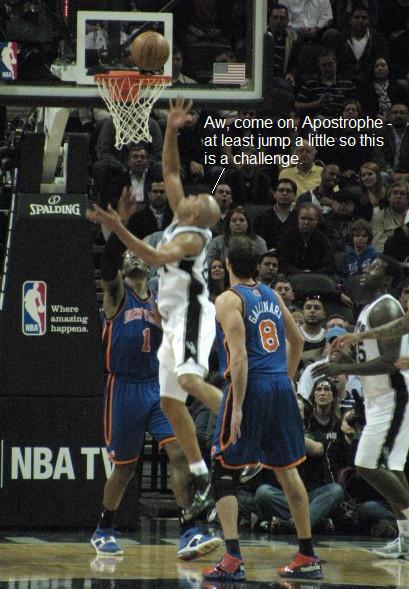 And Turiaf struggled all night with defense as well . . . 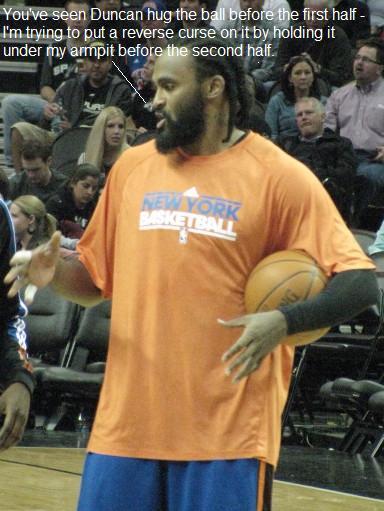 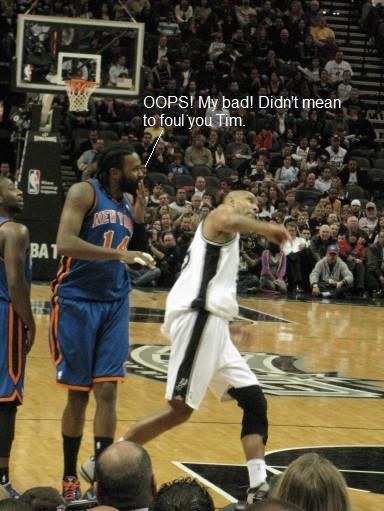 Best moment of the night by far was Timmy's dunk late in the game . . . 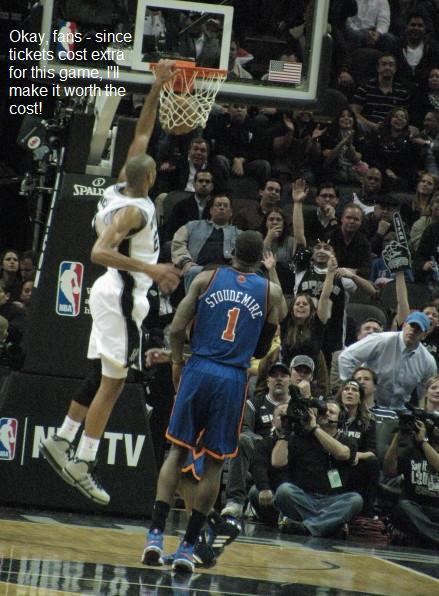 RJ picked up three quick fouls and was held out at the beginning of the third quarter. With a depleted bench, we couldn't afford to have him foul out. 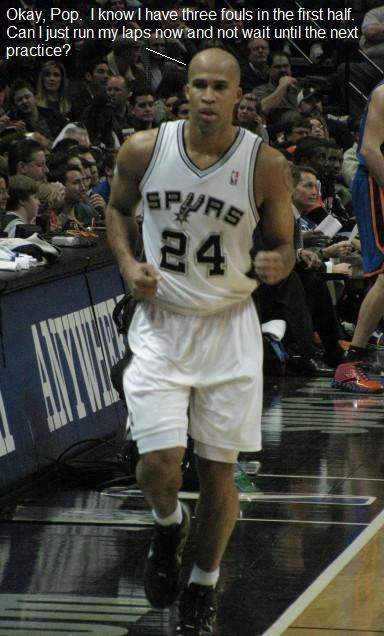 Parker also turned in a star performance with 21 points and 13 assists. My favorite TP moment was this one, when he leaped high to grab a key defensive rebound late in the game. 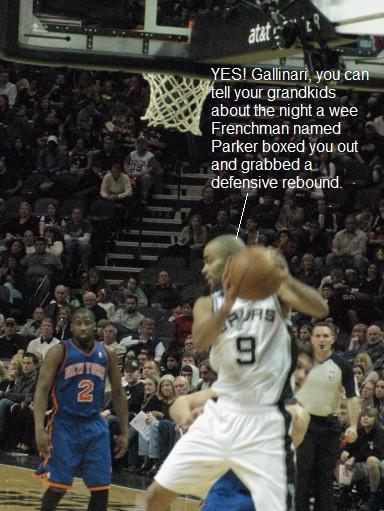 Manu contributed 16 points, but still struggled with his shot. He extended his streak of made free throws to 44, had 6 assists, 2 steals, and a blocked shot and provided plenty of floor leadership for his compadres on the court. 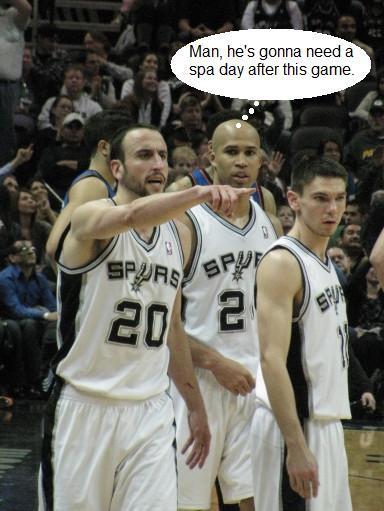 In a strange sequence late in the game, several players were in a scrum on the floor trying to grab a loose ball. The Spurs appeared to call timeout, but so did the Knicks, and the refs held a brief summit on the court to explain that they were calling it a jump ball: Blair v. Amar'e. (and yes, those are dancers in the background - they had run out on to the court, thinking the time out was called and had to hustle off when the refs changed their minds.) 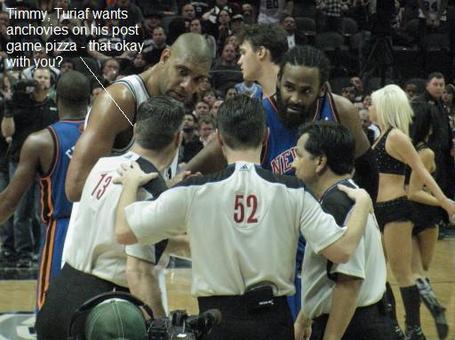 As the game was drawing to a close, Neal missed a defensive assignment and found himself in a "teaching moment" with Coach Pop during a timeout. Pop never misses a chance to teach! 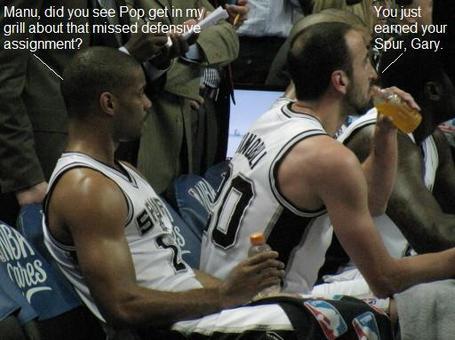 And in a freak incident, George Hill sprained his right thumb during pre-game warmups when a ball hit his thumb in just the wrong way. We really missed having him available as a sub. 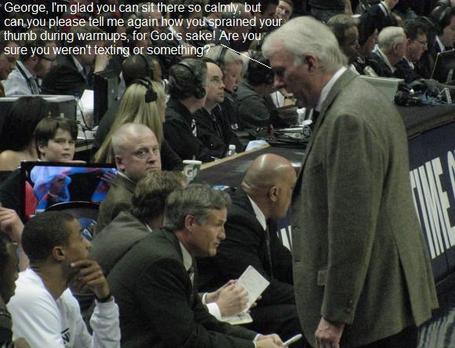 Tim and Tony have a little ritual before each game: go to center court for the captains' meeting with the refs, then Timmy runs back and does some tricky little shot which Tony then has to try and duplicate. Then they go to the bench and wait for introductions. 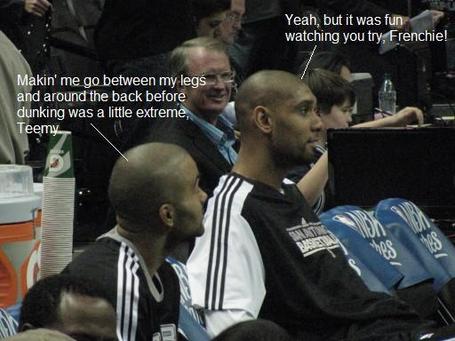 And these last two photos are just for fun - in the first one, Manu's feet seem to be in an impossible position in relationship to his upper body as he signals something to Tony (like maybe: "Not now, TP - let me get myself together first.") 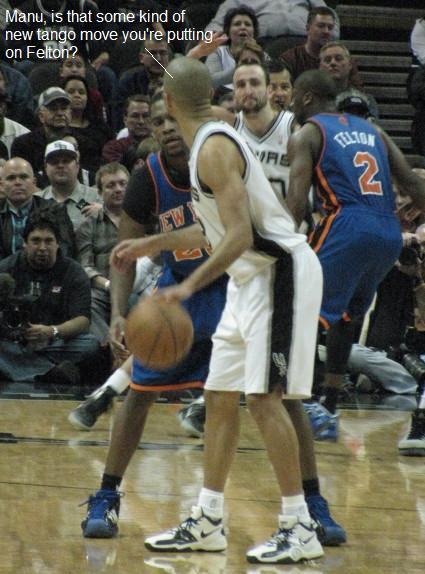 And I've always wondered if the ball went a little flat when it hit the floor on a dribble - finally caught a shot of it. 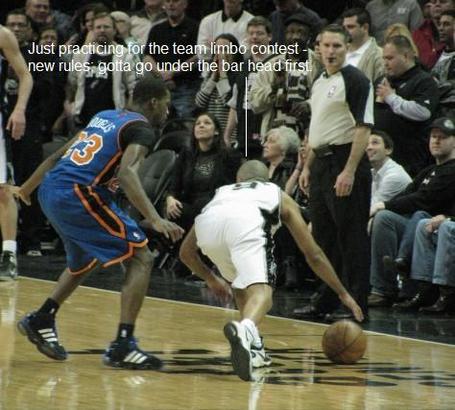