After getting scored on in every possible way during their first meeting at Madison Square Garden, the San Antonio Spurs took some measure of revenge by limiting the New York Knicks to 38 percent shooting all game long to end up with their 8th straight win, and 18th straight at home. Tim Duncan nearly missed a triple-double, recording 21 points, 16 rebounds and 8 assists to go along with 5 blocks to lead the Spurs, who finished a perfect four-game homestand and will now look forward to a long, possibly team chemistry-solidfying road trip. Twelve of the next thirteen Spurs games will be held outside the confines of the AT&T Center, including the annual Rodeo Road Trip.

Since this is a FIGABABA and we have another one tomorrow, this is gonna be a short one (TWSS).

I was surprised to see that this was another ESPN game they're putting the Spurs on. Wow, I mean how many nationwide broadcast games have we been on this month alone? And the team, indeed, has been putting on the floor for everyone to see why the gaudy record isn't a fluke at all. I mean, when you've got Mark Jackson pleading his case on national TV that the Spurs SHOULD have three All-Stars in LA, that's when you just say to yourself... okay, maybe, just maybe this team is doing something right. 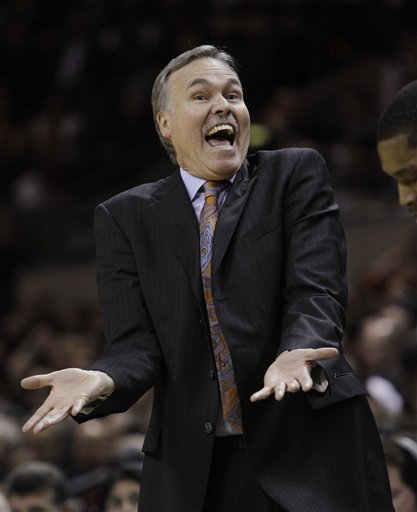 1st Half Highlights: Timmeh, you mad?

Tim remembers the time when he didn't play a stellar game, and that was the case during the first meeting when Amare and Chandler practically performed layup drills in and around the Spurs interior. And when Timmeh remembers, he makes sure to give 'em hell the next time. Duncan got off to a rolling start, destroying suddenly-starting center Ronny Turiaf's defense on him with impunity, and displaying the full offensive enchilada with jumpers, baby hooks and the rare running drive for the plus-1. I checked the first half boxscore and the light of the Big Fun shineth upon me: 15 points, 9 rebounds, and 4 blocks already.

D'Antoni tried to see for himself if RJ 2.0 was a reality, and attacked Peanut with Danilo Gallinari early and often, which led to RJ getting into foul trouble most of the game. Say what you want about his offensive production taking a hit, but I'm of the group that Rage has been consistently solid on the defensive end. He may not be able to keep up with fast guys, but he's able to funnel them to shot blockers effectively, and he's as physical as your ideal small forward could be. He did come alive in the 4th and made Gallinari a non-factor in that payoff period. I thought the refs were a little tight with him regarding the foul calls, so please refs, next time don't call too many fouls on the guy!

DeJuan Blair also had a superb half, with a lot of his forays in the paint experiencing Reply Success! You also have to give him some props defensively, where his constant and quick-handed attempts at deflecting, poking at balls created a lot of havoc. DeBeast kept in step with his frontcourt partner at the half, recording 10 points, 8 rebounds, 2 blocks and 2 steals.

The 18-6 edge in free throw attempts also showed who was the aggressor early on, and at the locker room Ric Bucher reports that D'Stache was unhappy with this. Um... yeah, Mike. Didn't you know the Spurs are one of the best at NOT fouling and giving up free throws?

A few mentions before I go to second half ramblings: Larry Owens nailed his first corner three, which should help in extending that 10-day contract. He also provided good minutes for a foul-plagued RJ, and played within his role. Also, there was a sequence when Duncan got poked in the eye and Apostrophe posterized the hapless GPFOAT. Geez, what a douche. But then probably one would say "finish strong" blah blah blah... whatever. It's Amare so he's still a classless idiot, regardless.

I didn't bother reading Simmons' moronic marathon chat wrap, and just CTRL+F'd the Spurs topics. Weird that if you search for "spurs", nothing appears and this quite pissed me off -- I mean, the guy chats for more than 4 hours and not even talk much about the best team in the league right now? Not surprising, but really annoying. And then when I typed "San Antonio", there it was -- know-it-all Bill banking on a Spurs injury just because of how bizarre this season has been with injuries, specifically with his beloved Celtics.

Memo to Bill: your team is older than shit, and waaay older than when people started calling shit, "shit".

But I'm alright with this, because Simmons has proven that he's a master at jinxing people, so when he says the Spurs are not immune from the injury bug, we'll actually be protected from it. Also, Simms, get your facts straight. Injuries? We got plenty with Hill and Bonner, two of our top subs, already being out a number of games, not to mention promising rookie James Anderson, whom if he wasn't in absentia, we might be cruising at a 41-2 record.

Geez louise, you'd think after writing that bible on basketball he'd have time to examine the Spurs a little more. Instead, he's chosen to continue professing love to Blake Griffin and spend an All-Star column labeling Tim Duncan as possibly the worst player on this year's West squad. C'mon, man. Everyone knows Timmy can still whack Gasol's butt at this day and age, if Duncan dare gives a damn. But he doesn't so it's pointless to argue with a man crazy in love with three things: 1) himself; 2) himself; and 3) Bill Simmons -- yes, he names that in the 3rd person just for full effect. 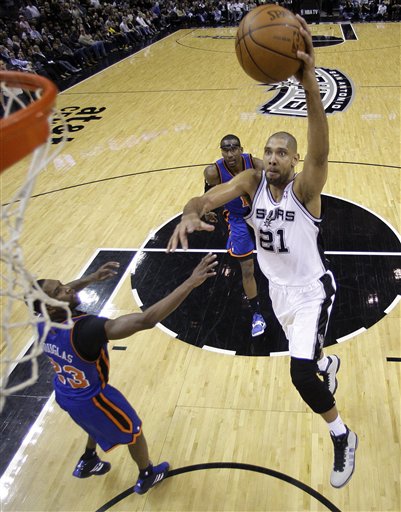 2nd half highlights: The Spurs as the bully? You betcha.

I've had this inkling feeling the last few games or so that the Spurs have been building a sizable lead early, not blowout-level, mind you, and then double-down defensively in the 2nd half to keep the opponents at arm's length. The increased intensity level may compromise the offense a bit, but the cushion is really enough to frustrate the opponent the rest of the way.

If you're the Knicks, you might've said after a short run to come close by 4 or 6 points, "Okay, we can beat these guys... we're on a roll, we're takin' over!!!" and then suddenly have your bubble burst with a well-executed Spurs play plus a defensive stop-turned into a three-pointer to extinguish that false hope. Of course we all would've loved a blowout, but what's better is seeing the team dial up the defense upward slowly but surely, giving the opponent a false sense of confidence that are then shattered into pieces. It's just like a bully beating up on someone and then invites the bullied to take a shot, while the bully just holds him back at arm's length.

Speaking of bullies, Duncan was one at the rim tonight. His paint defense was simply otstanding, and got back on Amare for his earlier poster dunk by stuffing Apostrophe's numerous at-rim forays. The Knicks just couldn't get past the old man on a consistent basis. I'm also suspecting that resting Tim is still a top priority, but Pop is slowly trying to increase plays run for Duncan to allow him to find his rhythm, which will be important come playoff time. Tim himself has mentioned that he's a rhythm player, and one who needs his shots to be able to consistently make them. Again, this just shows that there's a purpose to everything the Spurs do, and once The Full Duncan (not naked, hopefully) version is unleashed when it matters, hide the kids, people.

I thought this game should've been over early, but the Spurs kinda got away from their team game in the 4th because of Manu. Damn right I'm blaming Gino - there were consecutive possessions when he just operated on the iso and took ridiculous long-range shots, and his drives were largely ineffective. I love that he's aggressive, but he could've tried to incorporate his BAM buddies in the offense a bit more.

It's also worth mentioning that RJ finally got an alley-oop to go down, and it's sweeter since he also got one back for Tim, slamming the ball over Amare's noggin and bringing back his "hanging on the rim" eff you move for great Rodeo effect. Hey, we are preparing for that road trip, right?

The daggers could not have been scripted better with Tony draining a big three late in the game and TIME Duncan once again turning back the clock by blowing past Amare and slamming it home. If you look at the replay, you'll see Tim looking back at Stoudemire after getting past him as if to say, "this is for that dunk earlier, you insolent bug," and then slam-bam-thank-you-ma'am, Timmeh jam knocks out Spike's Knickerbockers, wham! Yeah, that was an awful attempt at rapping.

- Spurs recorded an astounding 12 blocked shots versus the Knicks' 6 -- just a reminder of how solid at-the-rim defense was this game. Amare was blocked 5 times, the most in the game. Douglas, Turiaf and Fields were each blocked twice.

- Spurs also led the rebounding department, 50-44 but gave up 8 boards alone to Amare.

- The Spurs assisted on 70% of their shots, which shows how well they continue to pass the ball

- Parker had the highest point-per-possession contribution at 1.14 points, followed by Tim with 1.1 points. (actually Larry Owens was at 1.31 points, but he played little and took only a couple of shots)

3 -- Tony Parker - He was great in stuffing the Knicks' mini-runs, and dished out 13 dimes. Home-cooked stat padding alert! Just kidding... of course the Spurs never cheat the stats, because if they did, Duncan would've gotten double-digit blocks in this game.

2 -- DeJuan Blair - Just a joy to watch when he's playing instinctively. His chemistry with TD continues to improve, and his finishing skills continue to get better as well.

1 -- Tim Duncan - Blair was exciting, but Tim was just solid, any way you look at it. One of the best two-way players in the game, and Amare can only dream of achieving Duncan's stat line tonight.

Up Next: The Hornets just POUNDED Atlanta, humiliating the Hawks by 41 points on their home floor. Whoa. Both teams are playing at a SEGABABA, and hopefully, the Spurs have more gas in the tank and stop the streaking Noochies.