Share All sharing options for: 10-day Interview - A Moment with Spurs Larry Owens

With 5:41 remaining in the first half of Wednesday night's game against the visiting Toronto Raptors, new Spur and well-traveled Larry Owens entered the contest to replace a struggling Gary Neal. Although Owens first official minutes came in clean-up duty against the Denver Nuggets in a Sunday victory, this would be his first real chance to showcase his abilities in meaningful minutes alongside Parker, Jefferson, Blair, and Duncan. In the first minute of his 1:51 of game time, Owens tallied one foul, one defensive board, and displayed solid awareness and hustle on both ends of the court - not a bad first sign for a rookie who has only been with the team for four days.

I, along with Tim Griffin of Spurs Nation and the San Antonio Express-News, caught up with Larry Owens after the game. 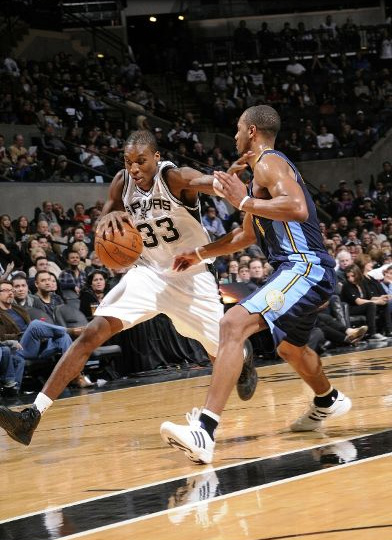 Pounding the Rock: After college, you played a little bit overseas, and then more recently in the D-League, how has that helped you prepare you for your first stint in the NBA?

Larry Owens: Just learning the terminology of defense and spacing. It’s similar to D-League, so I think the transition is pretty easy once you learn, you know, the calls of different teams, it gets pretty easy.

Tim Griffin: How tough is that to do though? You’re basically kind of thrown to the wolves out here – to try and pick that stuff up so quickly.

LO: It’s tough but you know, you got a great coaching staff that’s on you and helping you learn and push you to learn – teammates also. So, it’s not tough once you start to get the hang of it and you start seeing similar types of situations back in the D-League.

TG: They threw you kind of to the wolves; they stuck you in with the four starters. Were you a bit surprised at that frame of the action there?

LO: Oh yeah. But everyone tells me, you never know, just be ready, you never know. And once he called my name, I thought he called Gary [Neal], but he said Larry, I was like, "Oh, OK" so then I was ready.

TG: Did you expect that to come so quickly in your career up here?

LO: No, I mean, you never expect anything to happen in life, you just gotta be prepared for it when it happens.

PTR: Since your arrival, what have you and the coaching staff been focusing on?

LO: Defense. Just giving me terminology of defense and just getting me up to speed on their terminology.

PTR: With [Coach] Pop running a smaller line up from time to time, you’re a pretty versatile player, how comfortable would you be playing at the four?

LO: I’ll be comfortable. I played it at a time in my career, and it’s not a problem. Just got to use my speed against the bigger guys –and just basically use my speed and my knowledge of how to wide them and get around them.

PTR: A lot of Spurs fans don’t know who Larry Owens is. Could you tell us what you like to do away from the court?

The next opportunity for Owens might come against the visiting New York Knicks this Friday night. Owens will also face New Orleans and Golden State on the road prior to the expiration of his 10-day contract.

Make sure to check out Tim Griffin's post on Larry Owens over at Spurs Nation!