Role: Big in all seasons, Two-way game without weakness, anchor

This is not the book on Tim Duncan and the Spurs. That subject would require entire sections of the Library of Congress. This is just the extra-heavy pamphlet on what a Tim Duncan season looks like in box scores, and the different ways we have of evaluating players now. If your idea of fun is tables and tabulations, historical comparisons and classifications, then take a load off and get out your slide rule.

I don't think 'advanced stats' is the perfect name for the whole mess of new metrics available to compare NBA players, but using that term at least tells you where to look. In the Advanced table on player pages on Basketball-Reference.com, there's a summary of most of what gets recorded in NBA games, if perhaps in an unfamiliar format. Despite the unfamiliarity, these metrics are still drawn from the box score statistics that have been a part of NBA life for decades.

Whether 'advanced' is the right marketing or not, they let us compare Tim Duncan's from different seasons more clearly. For example, take rebounds and rebound rate:

Offensive, defensive and total rebounds and rebound rate by year

Rebound rate adjusts for minutes played and the rebounding opportunities (missed shots) in each game. The decline in total rebounds from 02-03 to 04-05 is due to the big drop-off in minutes over this period; by rate his performance actually improved.

In his first six seasons, Tim averaged 39 minutes a game and played in nearly every contest. In '04, Duncan missed thirteen games due to injury and sixteen in '05. During those seasons, and ever since, Pop has been very conservative with his playing time. Last year, Duncan only played more than 39 minutes six times, and three of those were with the help of an overtime period. He hasn't reached that mark yet this year.

When you take playing time and differences in opportunity out of the picture, Duncan's rebounding has improved with age - to the extent that it moves at all! Tim Duncan is basically going to collect 10% of his team's misses and 25% or so of his opponent's misses a year and that's as true now as it was in 2003. Duncan isn't the only big man whose numbers are so consistent when measured by rebounding rate. He's just one of the few to ever rebound like that to begin with. 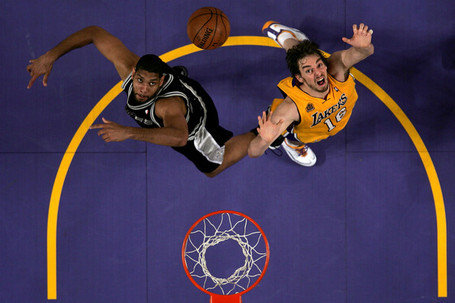 Over his career, Duncan has averaged a 10% offensive and 26% defensive rebounding season, which is pretty rare in the NBA. There are only 91 such player seasons since 1974. Dennis Rodman has eight by himself. Dwight Howard and Mutumbo both have five, Ben Wallace has four, and a lot of guys have three - Laimbeer, Parish, Olajuwon, Moses Malone, Marcus Camby, Okafor. Duncan's in good company at five and working on his sixth.

Tim is one of the best rebounders active, even though he won't finish very high on the all-time list. He's still performing at that level, but let's keep quiet if anyone says that he's declining. We wouldn't want to ruin the element of surprise.

After some early turnover trouble, Tim is back to his reliably efficient self. Blocks and steals seem to have gone up team-wide, and I suspect a change in coaching strategy might be involved. When it comes to assists, Duncan continues to be an effective distributor, if not quite performing at the peak levels of '07 and '09.

Below is a summary of Duncan's offense - TS%, an estimate of how efficiently he scores, and Usage% which tells you how many shots and free throws he attempts relative to the rest of the Spurs.

Big men who could rebound and take an efficient role in the offense were pretty common in the nineties - Barkley, Mourning, Ewing, Shaq, Malone, Olajuwon and David Robinson all put up the kind of numbers Duncan did. But in Duncan's era, it's just him and Kevin Garnett - every other big in his generation is either a rebounder who doesn't score (Camby, Nene, Bogut), a scorer who doesn't rebound (Dirk, Amar'e), or has been crippled by injuries (Yao). Duncan's offense isn't remarkable when compared to wing players, but stands out among his fellow big men.

His shooting percentages are down this year thanks to him bricking shots between a few feet away and fifteen feet out. This is dragging his TS% down, but FT shooting, shots at the rim and his mid-range jumpers are stable and account for more of his game. The real change in his per-possession numbers is in how many shots he takes - Duncan accounts for just 23% of our offense while on the floor this year, versus the 28% or so we're used to from past seasons.

This is what has led some in the national media to declare that Tim Duncan's decline is one of the two narratives for the Spurs this year. Fewer touches means fewer points per game, and in the sound-bite sports media, points per game is a proxy for how good a player is. The truth is, if he's struggling, it's up to Popovich to get him more minutes and touches. Beyond that and a slow start to his post/face-up game, we're seeing the same Duncan as always.

There are legitimate questions as to whether Duncan's post game will be an effective option if and when the Spurs need it again. The Spurs aren't using it often this season, and judging by the shot locations data it's not working too well when they are. If that's a bad sign, it's the first. Last year was one of Duncan's most efficient on offense, and he killed it in the short-to-mid range while drawing tons of fouls. I don't think that facet of his game is gone, just in storage and probably a bit rusty.

Another reasonable worry that Spurs fans have is that the years have taken a toll on Duncan's defense. It's clear just from watching that he's not as quick as he once was, but it's hard to put a number to something like that. Here are some adjusted plus-minus numbers from recent years that show Duncan's positive influence on the defense. Unfortunately +/- data only goes back a few years or there would be more of a basis for comparison.

Adjusted plus-minus uses many seasons worth of data to find every player's distinct effect on the scores. Different regressions from different years agree that Duncan helped the Spurs to the tune of about four to eight points per one hundred possessions. The samples that separate his contribution into offense and defense report that Tim is about equally valuable to both ends of the court, or at least was until recently. The samples with the asterisk (*) are from a regularized APM that gives a smaller range than the others, so even at +1.9 overall, Tim is still the twenty-eighth highest-rated player in the league.

More surprising is that the RAPM model concludes that almost all of Duncan's positive impact is happening on defense. In the 2006-2011 batch, Duncan has the second-best impact on defense, right behind Kevin Garnett and tied with Ron Artest; in just the 2011 data, he's still tied for seventh. According to the plus-minus information, Tim Duncan's defense hasn't slipped much at all since he turned thirty.

Duncan's box score statistics, once you rate them per possession or per opportunity, haven't changed much at all. When you hear Tim's name mentioned, it'll continue to be about his "worst year", single-digit this and career-low that, but it's mostly an effect of fewer minutes and touches. If there's any decline to be found in the statistics, it's in his less efficient and rarely used post game. Considering how steady Tim Duncan is in other facets of the game and how important he still is to the team, I think you can say reports of his demise are greatly exaggerated.

Thanks to Eli W, Aaron Barzilai and whoever is behind the RAPM at stats-for-the-nba.com for the plus-minus, and to CapHill for her help with the table formatting.