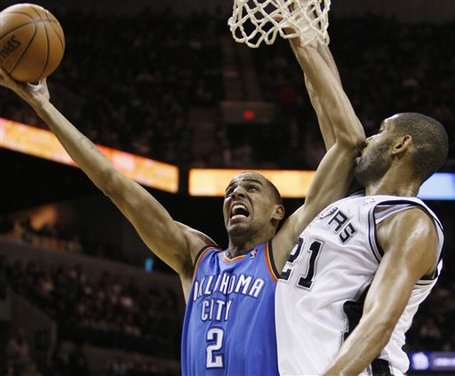 Please, Mr. Duncan, it's been a tough night. Just one basket?

The San Antonio Spurs continued its winning ways as it crushed the Oklahoma City Thunder, playing on the second game of a back-to-back set, on the strength of an improving defense. The Spurs held the Thunder to 74 points while its highly-ranked offense allowed the team to score 101 points. It was never close after the Spurs raced out to a 31-17 lead at the end of the first, and continued to pressure budding superstar Kevin Durant and his teammates into submission en route to a blowout. 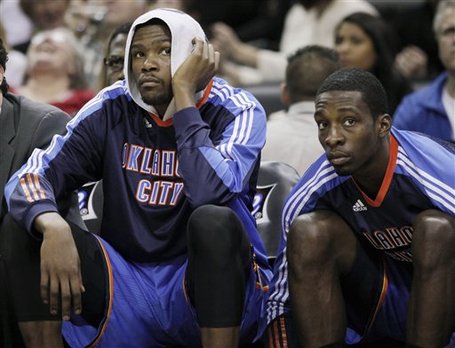 Would I put too much stock in this win considering that the Oklahoma City Thunder were on a SEGABABA, coming off a game against the Hawks? It's tempting to say no and admit that the young OKC kids were indeed too tired and that when rested, we'd be in a tougher battle, but the San Antonio Spurs were too dominant in this game for me to overlook the fact that Durant and his boys are just not in the level of the Spurs this season, as compared to last.

How dominant? For starters, let's look at the defense. The Spurs won three out of the four quarters, losing only the 2nd by a point. The Silver and Black held OKC to less than twenty points in three quarters, and scored 31-18-28-24 themselves. The Thunder were also held to a paltry 32% FG shooting and 14% 3FG shooting, which ain't gonna cut it if you're going up against a veteran squad like the Spurs. Further evidence of tired legs were also seen in the free throw percentages of the best FT-shooting team in the league (83.9%) when they only made 17-of-24 freebies for 71 percent.

Speaking of free throws, Sean Elliott kept on harping that the Thunder were a team that gets a lot of its points from the line, and Scott Brooks recognized this as he immediately ordered his boys to attack the Spurs defense from the beginning. It began to be an effective tactic as OKC shot 11 attempts in the first, but this plan wasn't lost on Pop and his staff. On the other end of the stick, San Antonio is the best in the league at limiting its opponents' trips to the line (a Pop defensive staple, if I may add), allowing only 0.18 FT attempts per FG attempt. In the next three quarters, the Spurs held the Thunder to 4, 5, and 4 FT attempts, which effectively took out Brooks' ace-in-the-hole with his team gassed from a SEGABABA. 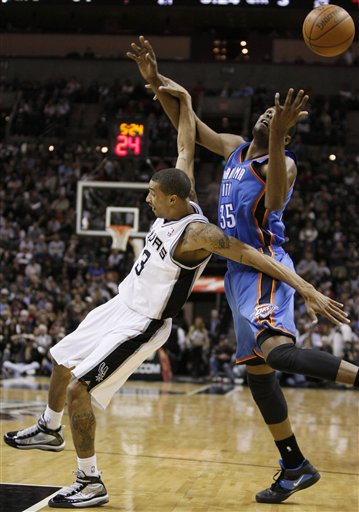 The combined wingspan on these kids are something else.

Further evidence of the Spurs' stellar defense was how they forced their opponents into taking a ton of outside shots. Really, it felt like the Thunder, save for Serge Ibaka, didn't want none of the paint. Of OKC's 85 attempts, 64 of them were taken from outside of the shaded area, with nearly half of them (31 shots) taken from 16-23 feet. Overall, the Spurs forced Durant and Co. to take an astounding 75 percent of their total shots outside, which explains the poor shooting percentages. Compare that to the Spurs' outside shots totaling only 59 percent of the total shots taken, and you can say that the defense simply dictated where the opponent will take the shot, while contesting most of them as well.

The number of outside shots OKC took this game also tells me how while they're above-average, this young team really lacks that inside presence that can help salvage them during these kinds of days when the long shots aren't falling. KD has to develop some sort of low-post game and take advantage of his length, because Jeff Green is more of a mobile PF who really plays outside and won't be able to match big guys on the low block. Ibaka's scores are mostly off putbacks and midrange shots, which doesn't help improve their inside scoring. Krstic is a stiff.

The Thunder had their best quarter during the 2nd, led by the extremely long and active Sir Chewbacca, who practically tore up Bonner and Splitter in the offensive rebounding department, and swatted a number of shots as well. Enter Tim Duncan. Timmeh went back into the game midway through the quarter, and helped stop a 14-5 Thunder run, while anchoring a counter 6-0 run by the Spurs to end the quarter up by 13 points, 49-36, and hold OKC to its lowest output in a half. 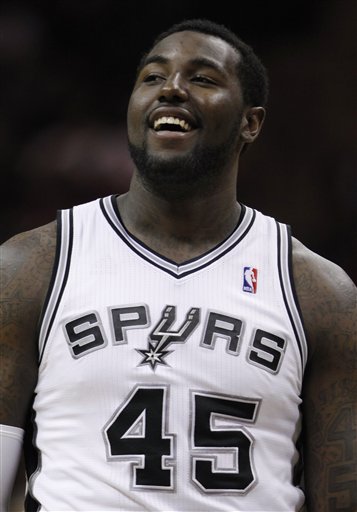 The RQCs were scared of the Big Bad Blair.

No 3QCs here as well, as the Spurs rattled off a 13-1 run to close the third to put them up by 24 points and effectively put the game out of reach. The starting lineup of Parker-Manul-RJ-Blair-Duncan practically did everything what they wanted out there, and BAM went in and continued the team's overall brilliance on both ends. The Thunder, meanwhile, don't really have much of a bench that can create offense and match the Spurs' offensive juggernaut shot-for-shot. It got pretty bad seeing James Harden and his epic beard shoot jumper after jumper after jumper.

Offensively, the Spurs didn't shoot particularly well from downtown (and didn't attempt over 20), but the ball movement was exquisite, generating 23 assists compared to OKC's iso-heavy offense that yielded only 10 dimes. TeePee and The Sickness were the main proponents in this charge, dishing out 10 and 7 assists, respectively. The patented fastbreak continued to be in full force, as we outscored the Thunder 24-12 in fastbreak points.

On the subject of lineups, I was watching the ESPN recap of this game, and the color guy said that the Spurs are the only team this season to feature the same starting lineup in all of their games so far. That, along with the interesting debate on whether Blair or Splitter (eventually) should start if we are to entertain dreams of a championship, got me looking into the team's most effective five-man units this season. Here's a simple table for you, courtesy of 82games.com:

If you'd like to know who is the most effective frontcourt partner for Duncan, so far it's still the old vet, Antonio McDyess. The Win% of this lineup is at its highest of 78.5 percent, followed by a similar lineup replacing only Ginobili with Hill for a 71.4 percent win rate.

Also, look at how important Tim Duncan is to the team's success -- the top 9 winningest lineups feature him at center, with Parker and Ginobili belonging to 7 out of the top 10 lineups. Jefferson is included in 6, while Hill is in 5.

As for the effectiveness of Blair in the starting lineup? That starting combination has logged in the highest number of minutes together through a sample data of I believe 27 games, and maybe not coincidentally, that lineup also has the highest plus-minus, running away with a whopping +84. The lineup coming second to that is a combination of Parker-Hill-Jefferson-Bonner-Duncan with a +29. I know we shouldn't trust stats as much, but it's hard to ignore the margin of difference when compared to other lineups.

Pop also likes to sub Manu first and in for George, and then reinserts Gino back in with the subs to boost the effectiveness of the bench. This way, Manu can be the playmaker and primary ballhandler to distribute the rock to teammates. The winningest bench lineup featuring Manu in it is composed of Hill-Neal-Ginobili-Bonner-McDyess (10th overall) with a plus-minus of 20.

You can still probably play with this table a bit, but I'll stop there so as not to make too many heads explode. Blair and Manu, after all, are anomalies in terms of advanced stats, and I'll leave the further analysis to the experts

In the end, it was another quality win against a good team, which upped the Spurs' record against above .500 teams at 14-3, and 4 full games ahead of closest pursuers Boston and Miami. We'll have a chance to add more space against Boston when the two teams meet in a few days, with the Celtics most likely KG-less and perhaps also Rondo-less.

Pop has already said he doesn't give a rat's ass over the record, but as the team has shown through the first 33 games, it just knows how to win. Happy New Year everyone!

2 -- George Hill - 16 points, 2 rebounds, 1 steal, 3 TOs. Zero assists but pretty much did what he wanted to do on offense. He, along with RJ, did a great job limiting Durant and did not allow the Durantula to get a lot of easy scores.

Up Next: @New York Knicks. It's a FIGABABA with the Celtics awaiting on the SEGABABA. This should be fun, as we meet up again with old friend Mike D'Antoni and Apostrophe, leading a team that also likes to run up and down the floor. Hold on tightly to whatever you can hold on to, it's gonna be dizzyingly fast. I do hope our defense continues to emerge in this game, we'll see if the Spurs can hold the rejuvenated Knicks to less than 100 points.