Share All sharing options for: The Spurs’ Style Change: Lemons to Oranges 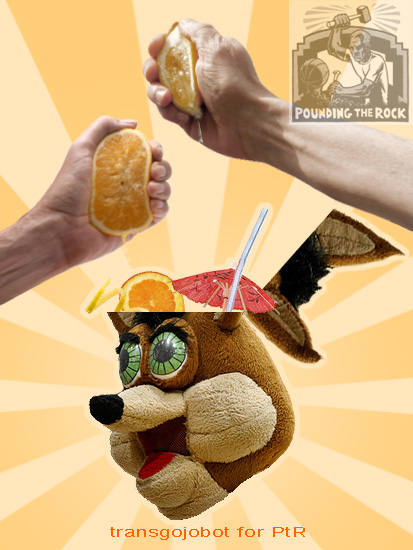 It's hard following my team this year without being faced with more queries about just WHY the San Antonio Spurs are playing so differently than in seasons past. And it seems like everyone from the major sports networks to your grandmother has an explanation for it, or an analysis of it. Even though my official position at this point is "Meh," I do enjoy watching the fast-paced, up-tempo flow. I suppose I'm apathetic because I'm probably one of the few that genuinely believes that run-and-gun won't be around for the post season. 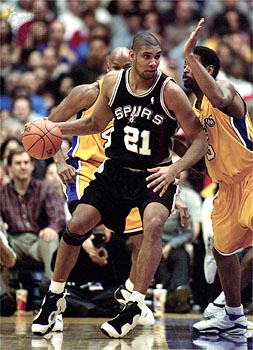 The Playoffs: more pounding than pushing the ball.

Count me among those who view the regular season as virtually insignificant to the Spurs organization. I like seeing the alley-oops and the pressure on an opponent's transition defense, but the fact is that over the history of the league, very few teams last long in the playoffs by simply pushing the ball. I have no doubt that when things get serious and it's do or die, the coaching staff will revert to a 'Defense-first' mentality, and I'm perfectly okay with that.

In the NBA Playoffs, you can't simply Nash your team to a victory; you must be able to lock down opponents and systematically disable and disrupt their offensive schemes and stars. But for now, in January, we're having fun sprinting to 120-point games and allowing as much as 119. It's refreshing to see DeJuan Blair barreling through the paint on a fast break; exciting to see Richard Jefferson dunking like he's under 40.

But regardless of the ramifications of our style change, I keep getting back to the question of "Why?" Why is this all suddenly happening? Why would Gregg Popovich, who is known for his rigid system as much as his stubbornness, suddenly convert to run-and-gun at this point in his career? How can a Hall-of-Fame coach, whose beliefs and perspectives are vindicated by 4 rings in 9 years, be persuaded after 13 years in the league to abruptly alter his basic basketball modus operandi?

I think the answer is simply a resigned realization of capability. Let's call it the "When Life gives you oranges, stop trying to make lemonade" theorem. Last season, Coach Pop stuck with the usual slower paced, half-court defensive focus, as he watched Richard Jefferson brain-fart his way across the court. Jefferson was supposed to have been the missing piece, the driving slasher/shooter who would spread the floor more for Manu Ginobili and Tony Parker and provide Tim Duncan another reliable outside scoring threat. Acting as a poor man's Bruce Bowen while calmly hitting 15-footers, he would be yet another lemon to spice up the brew. 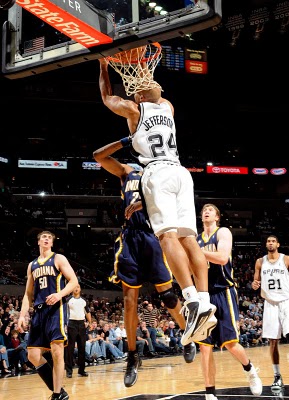 According to the Dunk-O-Meter, Rage is 28th in the league in number of dunks this season; Duncan is 75th, McDyess 99th, and Blair 111th.

You've heard it said before, the San Antonio Spurs employ arguably the most complicated plays and schemes in the league. If there's one thing you consistently hear from active players about the Spurs, it's that it takes awhile to assimilate into their culture. Learning the playbook is far more difficult than simply standing to the side and watching Chris Paul run pick-and-rolls, far more in depth than "get back and watch 'Melo dip his shoulder into the paint". And I'm just talking about on the offensive end.

There's also a lesser-heard mantra around the league regarding the basketball IQs of individual players. It's easy to be a winner (if you're not extremely talented or are one-dimensional) provided you have good court awareness and a solid "Basketball IQ." See: Bruce Bowen, Jacque Vaughn, etc. In fact, the Spurs are known for gravitating towards players with stronger skills in this arena. The thought being: you can teach shooting and rebounding, but you can't teach smart. Ginobili and Duncan are considered by most to be among the most intelligent players, court-wise, in the game. The team has always loved secondary guys like Horry, Oberto, and McDyess for this very same quality. All these guys, typical Spurs, are lemons.

But Jefferson has never been a lemon. He was always a leaping, shooting, slashingly athletic player; he isn't made any other way. He was incapable of quickly adapting his style of play to the Spurs' foundation. Jefferson (as was proved during a 2009-2010 season that saw the organization continually attempting to stomach a funky, urine-colored punch of sorts) is an orange. 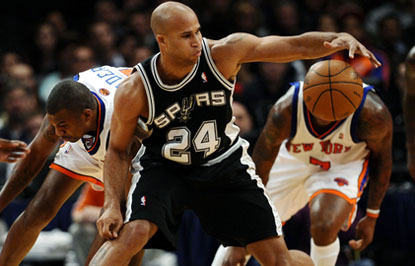 "Agent Orange" handles THE orange while a couple of Knicks cower in his wake.

Last off-season this fact was finally realized. The light came on deep within the recesses of the Spurs' war-room late one night when someone recognized that the days of pure lemonade were over. While no one had ever discovered it before, Ginobili and Parker are citrus hybrids of sorts, able to conform their style of play easily and quickly. Secondary pieces such as Hill and Blair and McDyess (and even old man Duncan) also seem to share this ability. The team, with an orange as a fourth option, couldn't continue with what had been sacrosanct for a decade. Though the intention might have been to acquire another lemon for the beverage, they simply couldn't continue to try and brew a mix; it wasn't chemically feasible. Some players simply don't fit into certain systems, and to stubbornly continue with the same formula would be to guarantee an awkward swill. If a critical ingredient such as Jefferson was to be used at his full potential, the SYSTEM must be changed. And the team went all-in and signed Jefferson to a new contract.

It was a revelation, but also a tremendous risk. Could styles be changed that dramatically and still produce success? Could an organization focused on slower play and "Defense first!" be flipped upside-down to produce the winning that the club was accustomed to? But even more alarming was the thought of standing pat: if beliefs weren't adapted, would victory continue to be as elusive as it had been since the '08 playoffs?

Right now, the Spurs have one of the best offenses in the league and are playing far faster than ever before. Defense is not the focus, but the team still has the best record in the league as the Rodeo Road Trip approaches. Jefferson has produced as we had originally hoped, and is an integral component of our success. Pop still knows that defense is what truly wins championships and has recently been stressing that more, in an attempt to possibly integrate the two styles as the end of the season approaches.

The REAL question should be: can and will the Spurs revert back to their time-tested and playoff-proven focus when the postseason begins? And what will our orange do if and when lemonade again becomes the beverage of choice? Should a libational crisis be expected, or can the team find a way to produce a mixed drink that goes against conventions and excels at both styles? If the franchise's history is any indicator, I'll happily tip back a glass or two. Cheers.