Share All sharing options for: Photos - Spurs Continue to Feed on Nuggets

How do you like your Nuggets? Smothered, as the Spurs did on defense against Carmelo, or Shredded, as the Spurs did to the entire Denver team in the second quarter? The star of the show for the Spurs tonight was Tony Parker, who filled up the stat sheet with 30 points (11 of 15 shooting, 2 of 2 threes, 6 of 6 free throws), 7 rebounds, 4 assists, and 2 steals. 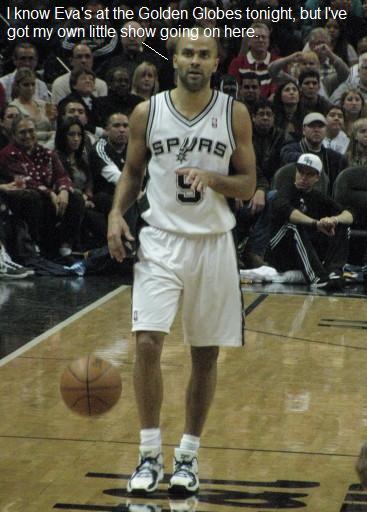 Tony hit from all over the floor - driving layups, short jumpers, and three-point territory. 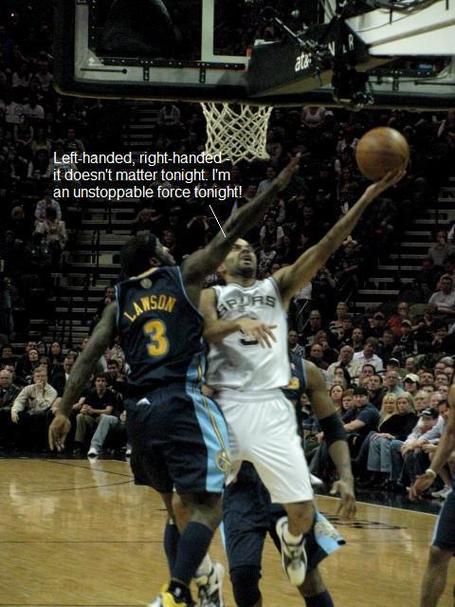 Tony's two three pointers in 42 seconds in the fourth quarter put the sauce on the Nuggets. 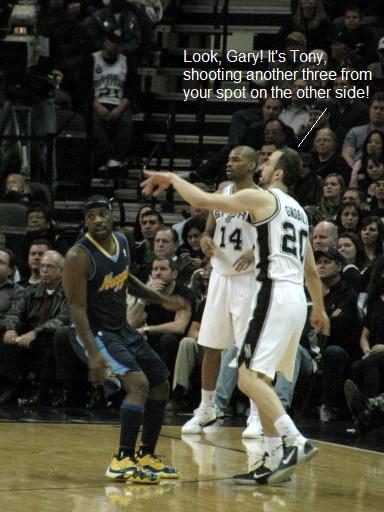 As great as Tony was, it was Manu who made the highlight reels: a block on Melo from behind that was the NBA Play of the Day, a bounce pass assist to DeJuan through Nene's legs that was the Assist of the Night, and a beautiful driving layup with a behind the back added for good measure. 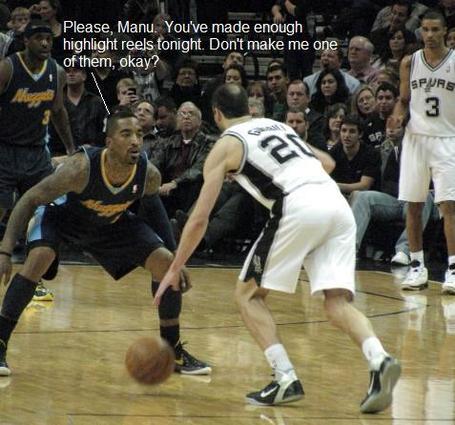 Tiago Splitter played some real minutes tonight, coming in late in the first quarter and playing into the second. His confidence seemed to grow with every minute he was on the court. 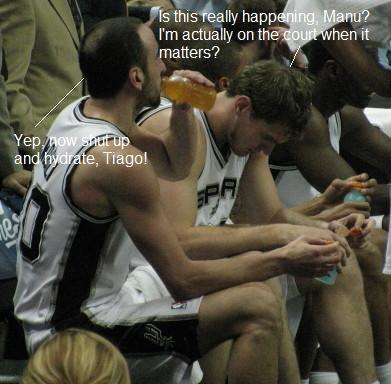 Play was rough on the court - check out the scratches on Tiago's arm after only a little more than two minutes of playing time: 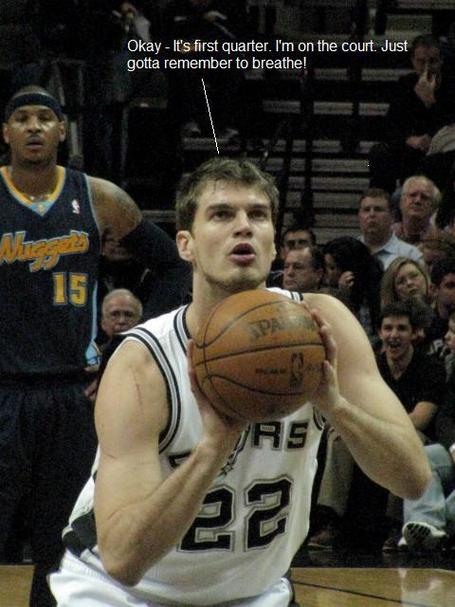 Late in the game, Tiago went down the lane for a thundering dunk, but landed hard on his back, prompting Coach Pop to say his "butt-bone must be made of steel." 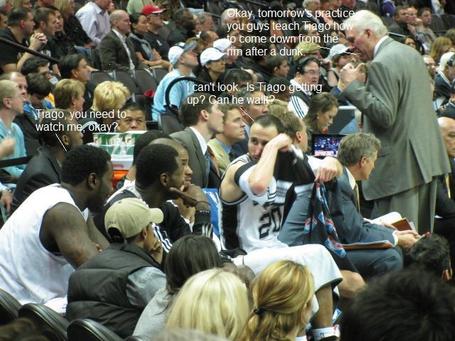 Timmy's offense wasn't as needed tonight, but his 16 defensive rebounds set up the offense for the rest of the guys. This jumper in the first quarter was a thing of beauty, though. 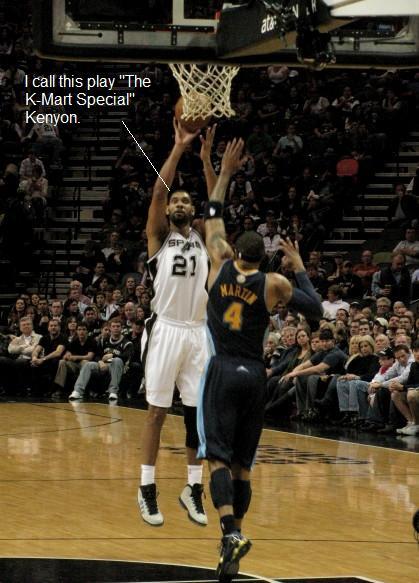 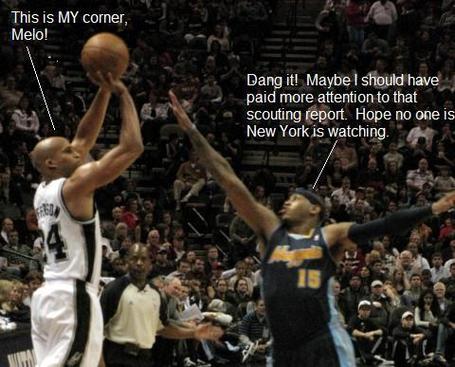 The Spurs played smothering defense against Carmelo, double and some times triple-teaming him to hold him to 5 of 17 for 12 points, well below his season average in the 20s.

Here Neal and Jefferson team up to guard Melo. 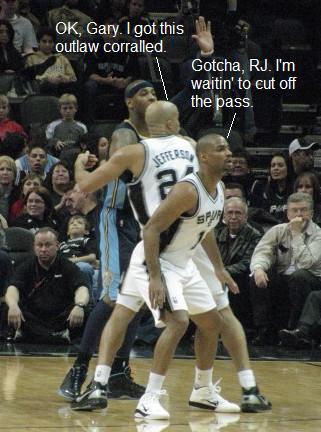 Manu uses those long arms and his quickness to bother Melo in this one. 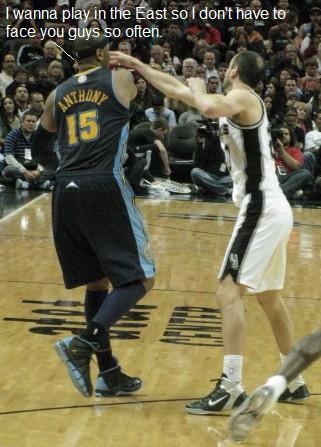 The game got a little chippy in the second half, and the Nuggets were called for two technicals in 5 seconds. The first went on Billups for shoving Parker into the Nuggets' bench. Here Carmelo is about to get the second one for complaining a bit too much. 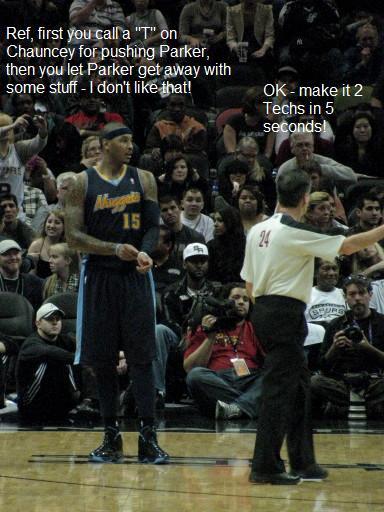 The Nuggets were not completely void of highlights. Nene dropped down a couple of dunks, although he, Melo, and Billups failed to score a single bucket in the second quarter. 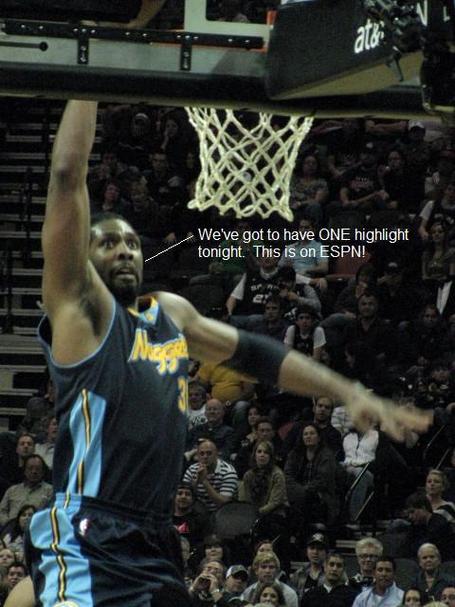 Just how dominating was that second quarter? Here are two shot charts from ESPN's on-line coverage:

First the makes for each team in the second quarter: 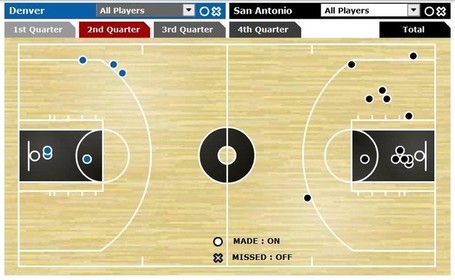 and the misses for each team in the same quarter: 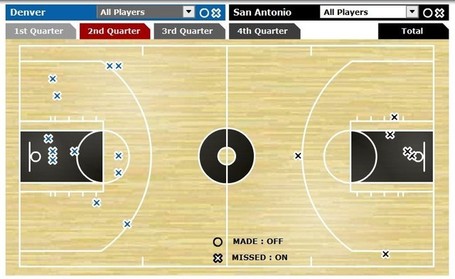