Photos - Dealing the Mavs Some Misery

Share All sharing options for: Photos - Dealing the Mavs Some Misery

"Oh, the weather outside is frightful, but inside it's so delightful. And since they've no Dirk to play, make 'em pay, make 'em pay, make 'em pay." Thankful for the break of no Dirk, and an ailing Tyson Chandler, the Spurs decided to take full advantage of the situation and made the Mavs' life a misery inside the AT&T Center. The Spurs starters outscored the Mavs starters 70 - 34. Leading the charge was DeJuan Blair, with 13 rebounds and 18 points - it didn't matter who guarded him tonight: Chandler, Haywood, or Mahinmi. He LOL'd all the way to the basket on offense and on defense. 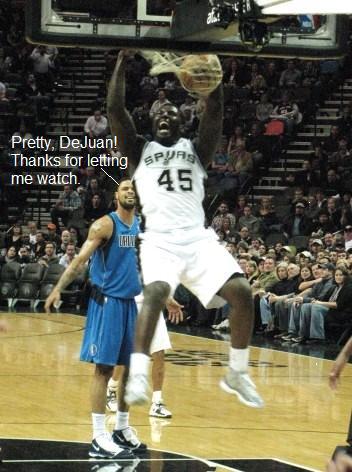 For some REALLY great photos, check out these by Kin Man Hui on the San Antonio Express News site: Slideshow Spurs v. Mavs

The opening tip may have been Tyson Chandler's best moment of the night. 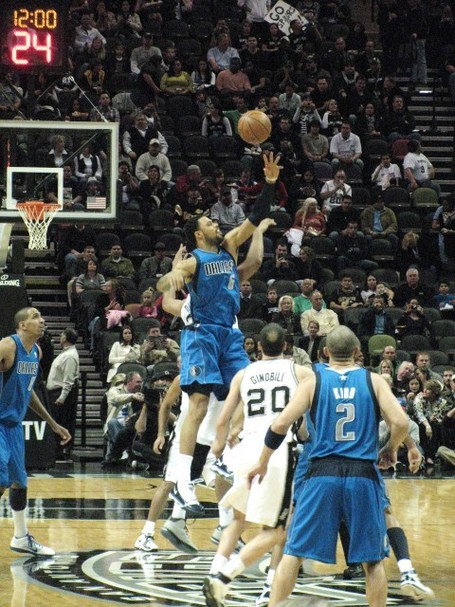 Chandler quickly found himself in foul trouble, with three in the first half, going to the bench for good midway in the third quarter with his fifth personal. 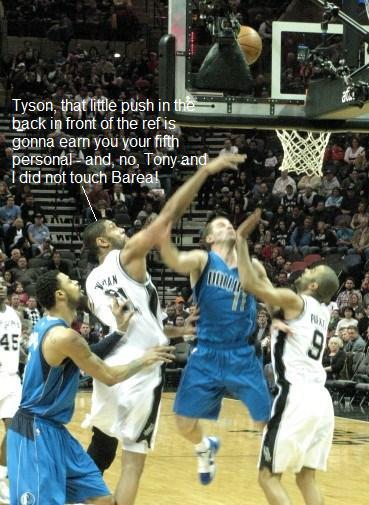 Tony Parker got the Spurs off to a fast start, either scoring or assisting on the Spurs first eight baskets, and the Silver and Black never looked back. 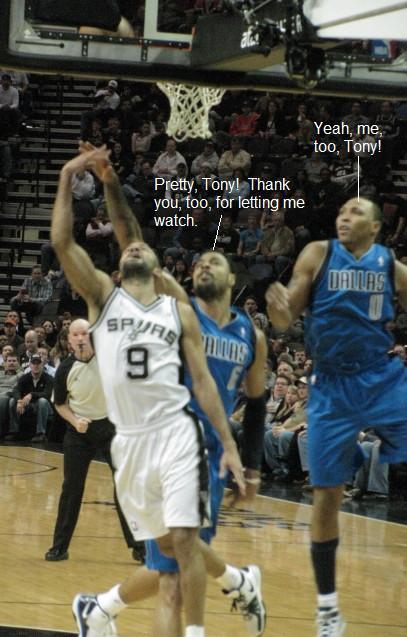 The Mavs' Jason Terry, so often a thorn in the side of the Spurs, struggled for the second straight game against the Spurs. He was also loudly booed whenever he set foot on the court. 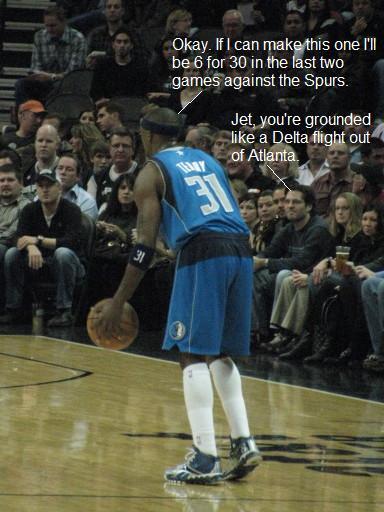 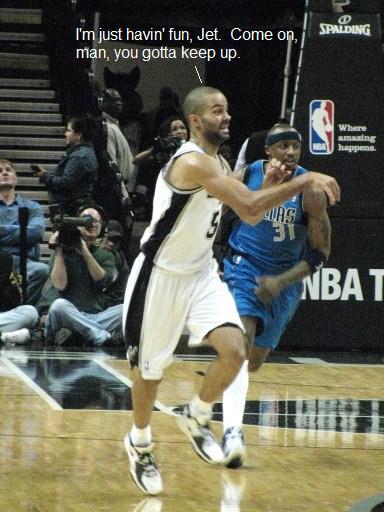 Tim Duncan looked like a kid again tonight, grabbing 12 rebounds, and laying down a couple of dunks (even elevating on the second one!). Antonio McDyess added 10 rebounds, giving the Spurs three players in double figures on rebounds for the first time this season. As a team they out-rebounded the Mavs 52 - 39. 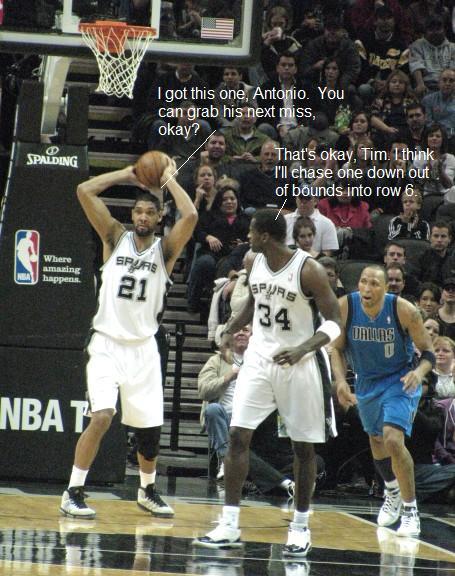 McDyess went after a loose ball in front of the Mavs' bench and hop-scotched his way over chairs, Mavs, and spectators before landing in a seat on the sixth row. Miraculously, everyone was okay. Be sure to check out the highlights of this one on the NBA's website. 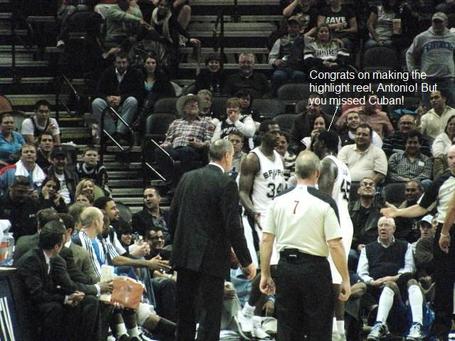 And McDyess' jump shot is so smooth I just have to include this photo: 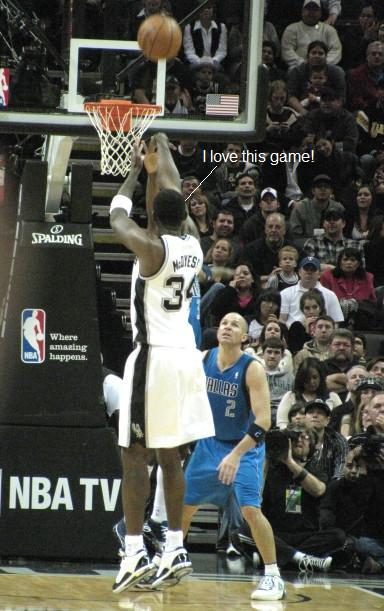 And "Mr. Seven Feet of Deliciousness" played 15 minutes in this game, but unfortunately his fouls outnumbered his points 2 to 1. 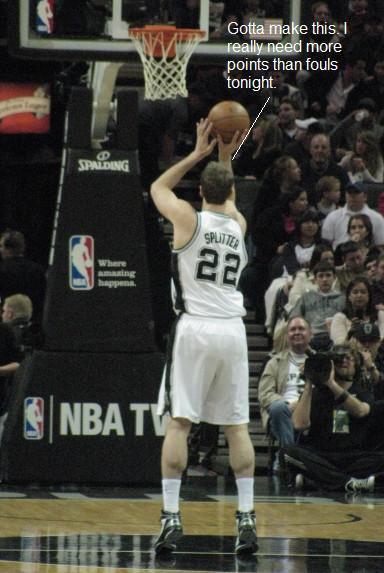 And the characters showed up to support both sides tonight (but no Basketball Jesus) - these guys are part of the same group of "tighty-whitey" fans that show up at Mavs games. They were told by Spurs security to keep those blue basketball shorts pull up over their BVDs. 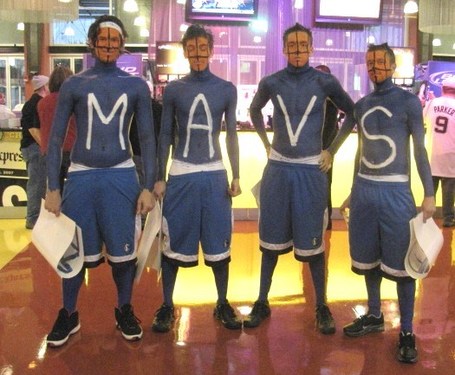 Some of us ladies show our support with signs we hold up in the stands. Others wear their signs. 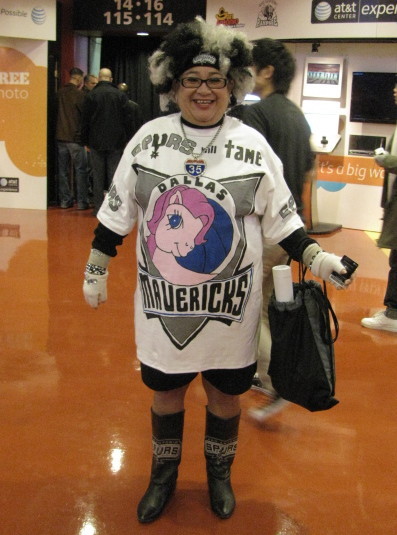 And finally, I just found it interesting to watch all the dynamics that came into play in the Spurs huddle during a 20 second timeout (these photos are in sequence). 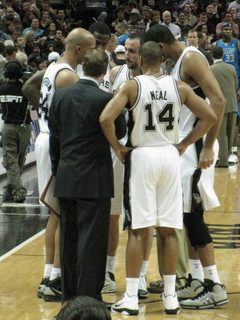 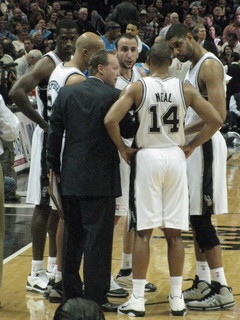 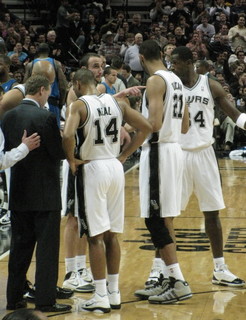 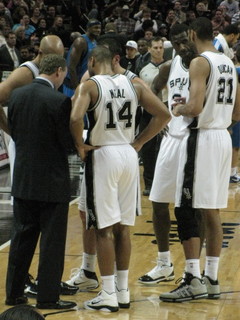