Share All sharing options for: Game #40 Preview: Mavericks @ Spurs, Round 3

I know what you're probably thinking after that hard-fought four game sweep of the T'Wolves and two-game sweep of the Bucks. These guys again? Chyeah, it's our in-state rivals... again! And we're barely into the midway point of the season. Fear not, since the 4th meeting will be a long ways away -- March 18 to be exact -- so hopefully we've locked up the number one seed in the West that time, and we can enjoy some Popovich mind games to again mess up the Mavs.

Still too early to be thinking about seeding, right? For now, this is the game at hand. Let's go.

This is a shot of McDyess' butt. Fear it. Just don't smell it. 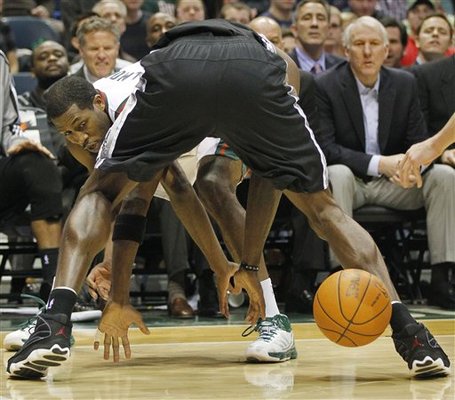 PG: Last time Tony squared up with Kidd, Le Baguette got dominated by The Oldness, including a highlight-reel, LeBro-style chase down block of a fastbreak layup by Parker. Le Coq hasn't been right lately in terms of scoring (14.1 ppg in January), but I do appreciate his 11 assists per game average over the last two games to make up for it. However, these are the times, going up against a slow but definitely still crafty PG in Kidd, that Tony must really step up his scoring numbers.

SG: Speaking of putting the ball in the bucket, Manu has regained his point-happy ways, which is most likely a clear indication that the flu bag has finally been defeated. Stevenson, meanwhile, has been shooting lights out in Dirk's absence, and it would behoove the Spurs to stop the guy from getting into a groove.

SF: Shawn Marion has somewhat resurrected his Phoenix Suns glory days taking the place of Caron Butler in the starting lineup, and I expect him to continue playing well because that's what Regular Season Marion does. Playoff Marion, however, is a different story and someone who is a property of the Spurs. Rage, on the other hand, stunk up the joint in that Bucks game (zero points... tough night), and if someone reminds him, he also kinda went cold during our last meeting with the Mavs, save for some late game buckets that redeemed his poor shooting night. Let's bounce back to 2.0 mode, please.

PF: In a desperate attempt to end their two-game slump, Carlisle sent The Jet back to the bench and went with a Twin Towers combination of Alexis Ajinca and Tyson Chandler, but to great non-effect. I figured Carlisle will keep Terry on the bench, but go back to starting Brian "The Janitor" Cardinal, who played well against the Spurs the last meeting.

C: Timmeh schooled Chandler in crucial stretches in Round 2, and I'm hoping more of the same in Round 3.

The Gnat and The Nutpuncher have always given the Spurs problems. If Dirk continues to not play, that shortens the bench for Carlisle and really limits the offense. Neal and Bonner (who's been en fuego these past few games) continue to shoot whenever open. Dice plays Dirk as well as anyone.

Carlisle has gotten the Mavs to really play defense, while still maintaining a potent offense, but his team's been struggling mightily in the absence of the big German. Pop has been brillian this season in managing the roster and throwing wrinkles into game plans.

Dallas played the Spurs tough in their second meeting despite Dirk's absence. Guess you just gotta throw stats and whatnot outside the window whenever these two teams meet.

The Spurs are off to their best start in franchise history. The Mavs are reeling with a three-game losing streak, and should be determined in breaking the slump.

I'm trusting that the Spurs will want to take advantage if Nowitzki is still out. But if Dirk suits up, watch out. It's gonna be a reaaaally tough one.

Turnovers - The Mavericks are middle of the pack in turnover rate. The Spurs need to continue their thieving ways, in order to start the fast break and get easy points. The Mavericks defense can't stop what it can't catch.

Ball Movement - The Mavericks all-around defense has no glaring holes, so Tony and Manu are going to have to penetrate the defense and then look to kick out to the shooters. No doubt, Dallas will continue to employ its vaunted zone defense, so ball movement needs to be crisp to provide open looks.