Share All sharing options for: Game #39 Recap - The defense, bench and Bonner hold Bucks at bay

Bench scoring and second-half defense turned a 51-43 halftime deficit into a single-digit win as the Spurs overcame the Milwaukee Bucks, 91-84. San Antonio used some timely Bonner buckets (both outside and inside the arc) and a touch of Manu magic to finish off the jet-lagged Bucks. Rest didn't seem to be an issue as Duncan, McDyess and Ginobili all played well, and the team donated just five turnovers while only allowing the Bucks to shoot 39% from the field.

Although eighty-two games must feel like a marathon of basketball to the participants, each step in the race is different enough from the rest for us fans to remember each one. Well, most of them, anyway. The games in the just-concluded Timberwolves playoff series are starting to run together, as if we just got done with game seven.

These games against the Bucks stand out, however, thanks to the tension you get when an all-defense-no-offense team that's struggling with injuries up and down their roster, matches up against a team that has the most efficient offense and cleanest bill of health in the NBA.

Although they're fighting two teams for the eighth playoff spot and are just 8-8 at home this season, the Bucks were in no mood to bumble this game away to the Spurs like the lovable Timberwolves would. Just like the last meeting, Bogut was all over this game from the opening tip. He made six of his first seven shots and put on the kind of defensive show that Tim Duncan used to be famous for - defending the rim, his opposite number (Duncan himself) and covering the glass, all at the same time. The Bucks offense was showing more than just Bogut's strength, as crisp ball-movement earned their team six assists and just one turnover in the first quarter.

The Spurs were playing fine on the offensive end, but were in no position to win this game if they couldn't keep the usually brick-happy Bucks from scoring so easily. The stress of double-teaming Bogut and keeping guys out of the lane led to late rotations and poor defensive rebounding, and free throws and second chance points resulted. Throughout the late first and second quarter, we would score on the fifth pass or some nifty Manu maneuver, only to immediately give up an easier Dish-it-to-Drew basket in our own end. Bogut scored six points in the last five minutes of the half to turn what was a tie game, into an eight point Bucks lead. 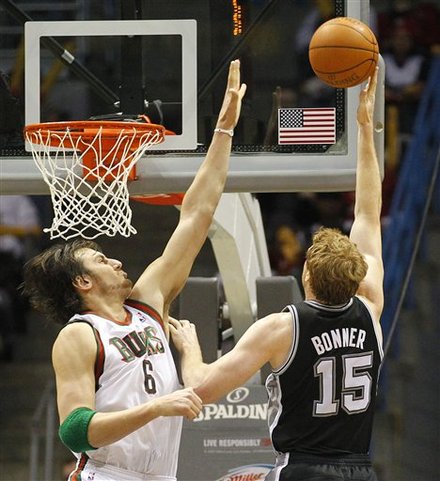 Bonner takes it right to Bogut in the second half. AP Photo via Yahoo.com.

I don't know whether to credit the halftime adjustments for San Antonio's response to the eight-point gap, or point out that Milwaukee is not very good on offense (with half their players injured) and was bound to cool off a bit. Either way, we made progress on the problem of Bogut's influence, the rotations tightened up, and the Bucks started to settle for jumpers rather than cutting to the rim.

It wasn't just contesting shots that let us catch up in the third quarter. For five magnificent minutes of hell to start the half, the Spurs rebounded misses and avoided fouls, allowing the Bucks to score on just one of their first nine possessions. It wasn't long until the Bucks adjusted and theatrical flailing aggressive play got them to the line. The rebounding improvement held as the Bucks had nine offensive rebounds in the first half but just four in the second.

The Spurs didn't turn this game around with a flurry of offense and three-pointers, although those were an ingredient. The difference between halves was one of focus. The Spurs came out determined to make the struggling Bucks work for every point. With only five total turnovers on the offensive end, the Spurs didn't have to defend the fast break, and were consistently a step ahead when given a chance to get set. When Bogut got the ball, guards swarmed at him and then looked around for cutters to defend. When we abandoned man-to-man defense to get the ball away from Bogut or to deny penetration, the rotations were crisp and forced long jumpers to beat the shot clock.

Matt Bonner exemplified the boost in focus and decisiveness that turned the tide. Bonner, Duncan and Ginobili infused the offense with just enough killer instinct to take advantage. The bench came through again, with Gary Neal and Antonio McDyess making the most of eighteen-minute appearances. When I say bench, I want to specifically commend Manu's bench squad, as distinct from the lineups led by Hill or Parker while Ginobili was resting. When Manu led the BaM, he made the most of his group's abilities on offense, and they got the most you can get out of having Ginobili on your team by being in the right spot and ready.

It's the Argentinean mind-meld that Manu has with backups Bonner and Dice that explains how he finished with +23 on the night while the other starters were close to neutral in plus-minus, and starter or not it's the special ingredient of Ginobili that makes our team so dangerous when Tim and Tony are resting. This game was more or less won in the matchup between Manu's bench lineup and the Boykins-Gooden gang, and it's certainly not the first win our bench has thanklessly chalked up for us. Let's hope we have the same kind of advantage over a goofy-looking but talented bench of Jason Terry, JJ Barea and Brendan Haywood.

Before I give you your three stars, I must take a minute to describe Matt Bonner's game tonight. Actually, instead of an amateur like myself describing Bonner's otstanding play tonight, let's hear it from the experts. Bill Land, at one point jumped out of his seat and screamed: 'Inside, outside, the Red Rocket, THEY CAN'T STOP HIM!' And in his post-game press conference, Scott Skiles said, "Nothing against Matt. We are Matt Bonner fans. But we know he is going to pump-fake and go right. And he pump-faked and went right over and over and over again." But to be fair, he did a good amount more than just hit threes, pump fake, and go right. It was the floaters on his way to the bucket, it was the shyhooks (yes, there was more than one), it was the dribble turnaround jumper. Once, it was even the drive all the way to the baseline before putting up a little 8 foot one-hander that dropped too. He had EVERYTHING working. It was a wonder to behold. And I hope you didn't miss it.

Matt Bonner, for 17 points on 12 shots, 3 assists, two steals and no turnovers. If you watched Matt put it on the floor tonight and were thinking "Oh God NO", this star's for you.

Manu Ginobili, for 23 points on 15 shots, 7 rebounds and 4 assists, with one turnover.

Tim Duncan, for 16 points on 7 of 14 shooting, 8 boards and 3 blocks with zero TO, and for figuring out how to defend Bogut in time for the second half.

UP NEXT: Home against the Dallas Mavericks, 7:00 Friday January 14th. The Mavericks look to make up some of that distance we've created since our last meeting. Whether or not they field Dirk Nowitzki, I expect a sharp opponent with better offensive execution than we've seen from recent adversaries.