Another miss for Gary Neal.

The coaching staff repositioned themselves on the court to rerun the same high screen catch-and-shoot. Chip Engelland launched another chest pass to a sprinting Neal, who stopped and popped ... another brick. Gary’s reaction said it all; eyes up to the ceiling, a deep sigh, and a frustrating clap of the hands all capped off by a solemn trudge towards the baseline.

The scene repeated itself for what probably felt like an eternity to a struggling Neal who could not get in a groove during his pre-game warmup before Sunday's game against the Minnesota Timberwolves. Coach Engelland would eventually pull Neal aside for a brief talk, away from the busy traffic on the court and the ever-watching eyes of early-bird reporters.

With under a minute to go in the 1st quarter and with San Antonio trailing by nine, Neal caught and shot, hitting his first attempt of the night; a 20 ft jumper off the same high screen curl that Gary had struggled with when the arena was empty. It was a shot that would jumpstart a Spurs 6-0 run to close out an ugly opening quarter. Neal would finish the night 4-5 from the floor, including a 3-4 performance from deep, and scoring 8 of his 13 points in a tightly contested 4th quarter.

Last year, while the San Antonio Spurs were struggling through what was arguably the most frustrating regular season of the Tim Duncan era, virtual unknown Neal was draining shots for Unicaja Málaga in the Spanish League. Now almost halfway through a season playing in the world’s toughest basketball league, Neal finds himself in a key role coming off the bench for the NBA record-best San Antonio Spurs, with NBA fans, coaches, and announcers asking, "Who is Gary Neal?" Not even in his wildest imaginations did Neal expect to make such a sudden impact. "To be honest with you, I was probably at the beginning of the season, the fifth guard on the depth chart," said Neal. "I think I got 18 to 20 minutes tonight and I was able to contribute. It always feels good when you’re able to step on the floor and help your team win games. I’m just hoping I can consistently do that." 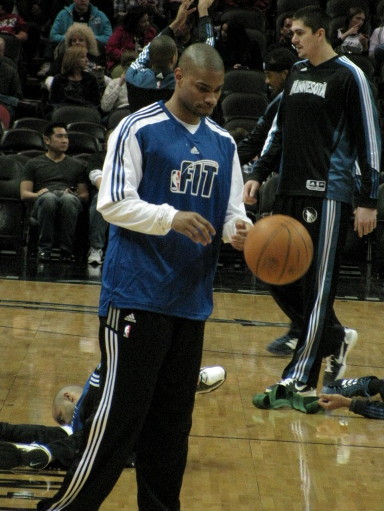 Gary Neal prior to Sunday's game against the Minnesota Timberwolves.

With Neal’s ability to hit from deep off the dribble, coming off a screen, or standing still, it is no surprise Coach Popovich would want him on court in crucial late minutes. The San Antonio Spurs have always relished having a sharp shooter from deep who can open up the floor for their marquee players; a role that has been filled in the past by Steve Kerr, Brent Barry, Bruce Bowen, and Michael Finley. "Me being on the floor at the end of the game allows Manu, Tony, and Tim more room to operate because on the scouting report it says 'Gary Neal's a shooter, so you have to be aware of him,'" said Neal. "I know my role on the court is to make shots to help us win."

Although primarily a scorer off the bench, Neal also knows that the key to any championship run, especially for the Spurs, is defense. His hustle and awareness on the defensive end have been another welcomed surprise to both Spurs fans and the coaching staff. "Offensively, you’re not going to score 120 points every night as much as you would like, it’s just not going to happen," said Neal. "Our backbone is defense and if we can play that every night, we have a chance." In the final seconds of the game, with Minnesota needing three points to send it into overtime, Neal entered the game in place of Duncan to guard the in-bounds pass and Minnesota’s Corey Brewer.

That Coach Popovich would play a rookie in such important spots speaks volumes about the trust he has in the 6'4" guard out of Towson University. That Neal played so well after an unsatisfactory workout before the game points to his mental toughness and readiness to step up when his number is called -- and even when it's not. Early in the fourth quarter, the T-wolves went on an 9-2 run to cut the Spurs lead to two. When Jonny Flynn missed his chance to tie the game at 80, Matt Bonner got the rebound out quickly and Neal found himself on the break, with three Wolves defenders between him and the bucket. A perfect time to slow it down and wait for the rest of the offense to set up? Not quite. Neal dribbled between his legs to get in rhythm, and calmly pulled up outside the three point line to stroke home a jumper that was part of 8 straight Spurs points he scored.

The year has been a series of delightful gifts for the Spurs faithful, and performances like last night's show why Gary Neal might be the best of them all. With what we have seen from yet another Spurs diamond in the rough, there is no reason to believe Neal won’t continue to fill the sharp shooter's role that has been a staple on Spurs’ championship teams. But the season is young and still burdened with trials to come. How his minutes and production will be affected by the return of fellow rookie teammate, James Anderson, has yet to be determined. Neal has also yet to be tested in the battles of playoff seeding and a time when the question, "Who is Gary Neal?" is no longer being asked.