Share All sharing options for: FIBA World Championship: The Quarterfinals and Semifinals (Updated) 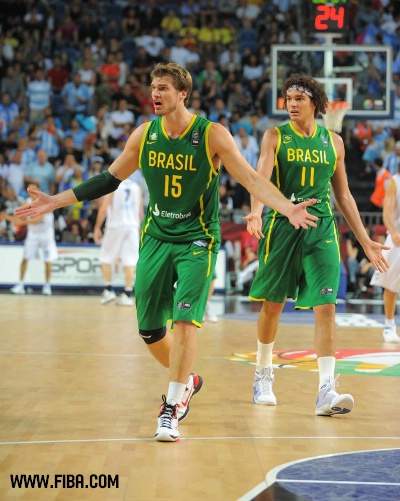 Good show, Tiago. Now get back to San Antonio and start learning the playbook. But first, tell Barbosa he's a horrible teammate.
[image via turkey2010.fiba.com]

All the pretenders have been eliminated from the World Championship. Also, Greece and Brazil were eliminated. It only gets more intense now, as the 8 remaining teams have a chance to take home the trophy. It also helps that none of the teams that are left suck.

Here's how things look after the round of 16: 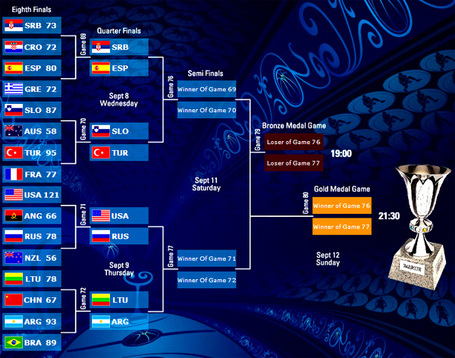 And now, some game preview and predictions:

Serbia has not yet lost a game in this tournament, although Croatia came very, very close to upsetting them. The Serbs predictably went to Nenad Krstic, Aleksandar Rasic and Milos Teodosic when the games started to count, and those guys are pretty damn good, but might not have enough to knock out their next opponent. Spain lost a couple of games in group play, but is notorious for not playing well until it's neccessary. It's neccessary now, so JC Navarro, Ricky Rubio, Marc Gasol and company seem to have woken up, as shown by their easier-than-the-box-score-indicates victory over Greece in the round of 16. The Spaniards should still be the odds-on favorites in the tournament, if you ask me. Then again, who the hell asked me?

Slovenia has done an admirable job in this tournament so far, with Goran Dragic and (maybe) Bostjan Nachbar as their only NBA-quality players. Their absolute demolition of the Aussies was impressive, but this team is inconsistent. One day they'll beat out Brazil, but the next time out, they almost blow it against Iran. When their shots are falling, this team can be devastating. But they're headed for a buzzsaw. Turkey's home court advantage has propelled them into some very inspired play. They blew out France in the last round, and only one team has even come close to beating them(Puerto Rico, oddly). Hedo Turkoglu woke up from his tournament-long slump just in time to pour in 20 points on over 60% shooting against the French, while Ilyasova, Erden and Asik give them loads of size and skill in the frontcourt. If Beno and Rasho were playing this summer, Slovenia might have a chance. They're not.

The Americans have been as impressive as the host country, if not more so. Kevin Durant looks like every bit the type of leader needed to succeed in FIBA play, with Rose, Billups and(surprise!) Eric Gordon providing a lot of solid scoring support. Durant's frontcourt partners Lamar Odom and Kevin Love have done surprisingly well, enough to make American fans like me believe that this team might actually pull off a World Championship for the first time in 16 years. The USA has only been challenged once in this tournament, and their last 3 games have each been against worse opponents than the previous one. That trend changes now. Russia's monster frontcourt of Timofey Mozgov and Sasha Kaun have been dominant in their tournament run, and they've held every opponent to less than 50% shooting so far, thanks to the shotblocking they provide up front. The USA is going to have to make jumpshots to win this game, so it's a good thing they have the personnel to do it. The American defense should be good enough to hold on for a victory, but this game won't be a rout.

And now we come to probably the most evenly-matched game of the quarterfinals. Both of these teams have an incredible scoring machine surrounded by quality support players. Linas Kleiza continues to play like a man possessed, scoring 30 in the win over China on 64%(!) shooting. This team has played even better defense than the Russians, and their frontcourt has recently been supplemented by the return of Spurs draftee Robertas Javtokas just in time for the elimination rounds. But they may have found their kryptonite. The Lithuanian offense has been pretty dismal outside of Kleiza, and Carlos Delfino is going to be the best defender he's faced in the tournament. Meanwhile, the man who has easily been MVP of the tournament so far, Luis Scola, now has solid frontcourt help in the form of Fab Oberto, who defended a certain Brazilian Spur very well in Argentina's win over their South American rivals. This team is good enough to earn a rematch of the 2008 Olympics semifinal match against Team USA.

So, that's how I see it going down. Use this thread to talk about the quarterfinals games, and I'll update it with the new matchups when it's time for the semifinals.

I sold Serbia short up above, and for that I am truly sorry. They took the silver at Eurobasket last summer, losing the final to Spain. But the Spaniards had Pau Gasol at that time, which is quite the advantage to have in these type of competition. Serbia exacted its revenge this year via an incredible shot by Teodosic with under 4 seconds left, sending Spain home early. They're going to need all the firepower they can muster in their semifinal matchup, because they're going up against a team that's played as if they were possessed. Turkey has been running roughshod over the competition, and showed no signs of slowing down in a 28-point thrashing of Slovenia. Hedo had a rough time in the group stage, but has now put together two stellar games in the elimination rounds. He is helped by fellow NBA-ers Ersan Ilyasova(Bucks), Semih Erden(Celtics) and Omer Asik(Buls), completing what has been a dominant frontcourt so far in the competition. The host nation is not going to be beaten easily, and I just don't think Serbia has enough to get it done.

Team USA made their fans sweat on Thursday, when they had trouble figuring out Russia in the first half. The second half was much better, and the Americans were eventually able to relax. But this team is pretty troublesome, and they can't afford to have the first-half issues that they did against Russia with their next opponent. They're up against a traditional FIBA powerhouse, and a team that actually plays together rather well. Kevin Durant is going to need some quality help in this game, and the USA needs to move the f5g ball instead of counting on him to do everything. The star of the Lithuanian team, Linas Kleiza, was right when he said this about the US: "They're definitely not beatable in a seven-game series. But in one game, who knows what can happen? A lot of things can go right and a lot of things can go wrong. But they're a very good team.'' As for his team, they utterly destroyed Argentina on Thursday in one of the best performances any team has put in during this tournament. If the Americans want to win their first title in 16 years, it's going to be extremely difficult to get it done. But, I'm a homer. I have faith.

It's only going to get more intense from here.