Shooting? I Got Your Shooting Right Here

Share All sharing options for: Shooting? I Got Your Shooting Right Here

Much has been made this offseason about the failure of the Spurs' shooting during the painful series sweep by Phoenix last May. While I still believe more blame for that loss lay with the team's lackluster defensive performance, it's definitely true that the Spurs have traditionally had great shooters to help the offense run much more smoothly. There's a long list of guys that have filled that role for the Spurs over the years, but it would suffice to say that the front office is very well aware of the importance of good outside shooting from his team.

With the team getting a much needed frontcourt upgrade in the form of Tiago Splitter, adding some good shooters could make this year's team incredibly efficient on the offensive end of the floor. We've talked a lot about Tiago already, but I'll add that one of the strengths of his Caja Laboral team that won the ACB title last year was - you guessed it - shooting. So what kind of help will he and the Spurs' other big men find on the perimeter this season? Let's talk about it.

For a team that featured the big 3, plus Richard Jefferson and DeJuan Blair, the Spurs underwhelmed on the offensive end of the floor last season. The lack of a consistent three-point threat led some opponents to pack the interior, which caused the team's trademark slow-it-down offense to stagnate while waiting for holes in the defense that simply did not appear. Good shooting can fix that. If your defense can't sag off of, say, Keith Bogans, since there's a greater threat on the perimeter now, that opens up more room on the interior. We've heard Pop, broadcasters, and quite a few of our own members comment endlessly on the importance of spacing the floor. And it's not just empty talk in an effort to justify the presence of a certain red-headed power forward in the Spurs rotation. Speaking of whom...

The Red Rocket is a controversial figure on this team. For at least two years he's been maligned for getting "too many" minutes. Though he hasn't fared as well in the playoffs as any of us probably hoped, he's still been an important part of how the team won games during the regular season. In my personal opinion, folks looking for him to be played sparingly this year are going to be disappointed, because the Spurs' braintrust obviously thinks he is an important part of what they do. If we can avoid the type of situation where he's taking over potential game-winning possessions, I think Matt's going to be just fine. Also, the Spurs really love to run their offense on the left side of the floor. Guess where Matty's at his best? 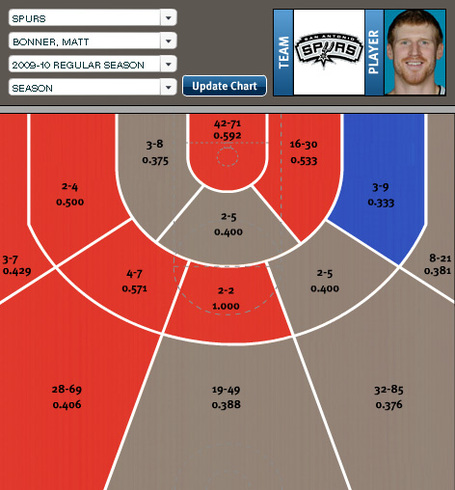 Get used to him, folks. Mudbutt isn't going anywhere.

In an interview a couple weeks ago, Pop said that George knows how to work in the corners, and he wanted to see George improve his range around the rest of the 3-point arc. As we all know, Pop's coaching staff keeps shot charts for all their players, so one could assume that Pop knew what he was talking about. But, for those who may have thought there was anything wrong with Pop's assessment, I give you George Hill's 2009-10 shot chart: 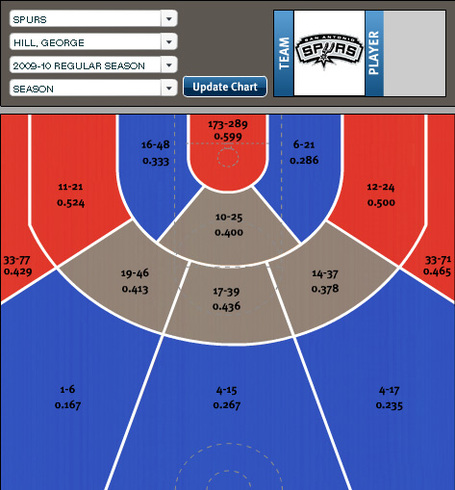 George is positively deadly from the corners, but ice cold from anywhere else beyond the arc. Lucky for us, he realized that, and took the overwhelming majority of his long-range shots last year from the corners. He's also worked on his shooting during the offseason in an effort to extend his range out to the wings and top of the arc, so we'll see soon enough whether he's been able to improve his shot from those areas.

And now we come to the last-minute addition to the training camp roster that probably should have created more buzz than it actually did. Simmons is a former NBA Most Improved Player(2004-05), and has been a deadly shooter throughout his career. Let me put it this way: if this guy has anything left in the tank, he will make the team. How good a shooter is he? Let's take a look at his last healthy season in New Jersey: 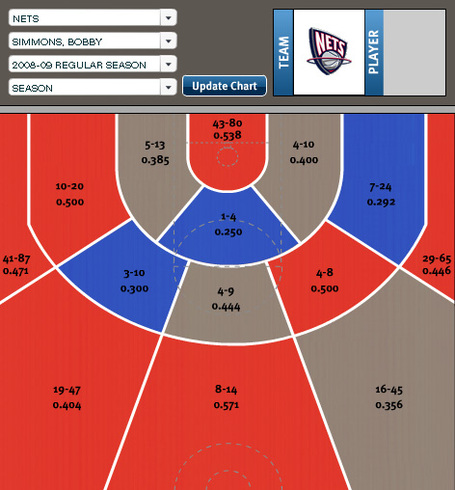 That's right, he shot over 35% from every single area beyond the arc, and over 40% from everywhere except the right wing(insert political joke here). Simmons is (historically, anyway) a sniper of the highest order, and with a 40% career average from beyond the arc, he should command the respect of opposing defenses. He'll make a great addition to the offense if he can still do what he used to before his injury issues.

For the Spurs' latest draft night find, I would normally defer to the expert on all matters Anderson - CapHill. While Cap raves about his overall scoring ability(which is top-flight, I've been assured), for the purposes of this post, we need to find out more about his long-range shooting. So, in this case, I'm going to quote Jonathan Givony of DraftExpress:

Anderson is clearly the centerpiece of the Cowboys’ offense, as they run him off a huge number of screens on virtually every possession in an attempt to get him open looks. Staggers, flairs, curls, down-screens—any shot they can get him with his feet set is a good possession for them. Anderson’s shooting ability is simply outstanding, as he boasts excellent form, consistent mechanics, a quick release, and terrific range on his jump-shot. Despite shooting just 36% from beyond the arc this season (more an indication of the type of defenses that are thrown at him than anything), Anderson projects as a high-level NBA shooter any way you slice it when looking at the way he can put the ball in the net.

Emphasis [obviously] mine. With the kind of teammates he'll have in San Antonio, James should have enough open looks to show us a better picture of his abilities. Hopefully, he can shoot somewhere in the neighborhood of the 40.8% mark he attained during his sophomore season at Oklahoma State. The threeball is far from the only weapon in Mr. Anderson's arsenal, but it may prove to be the most effective.

By now, we're all aware of what the summer league sensation did in Vegas. He put on an incredibly efficient shooting performance, but in an incredibly small sample size. This is important, because no matter what he looked like in summer league or team practice/scrimmages, his history isn't quite as generous to him. Once again, here's DraftExpress with his stats. Neal won the Italian League scoring title last year, and he shot 36.8% from long range. Pretty good, but that statistic is his highest number since he started playing professionally, which isn't comforting, especially given the closer proximity of the arc under FIBA rules. The good news is, since he started playing in Europe in 2007, his shooting seems to have improved every season. Also working in his favor is the fact that as the leading scorer in the Italian League, those numbers may have been decreased due to opposing defenses concentrating on him, much like it was for Anderson at OSU last year. Hopefully, his upward statistical trend continues, but I'm a bit worried about his ability to make the right decisions if he isn't wide open. Neal reminds me too much of Roger Mason, and that spooks me a bit.

This man is probably the purest shooter on the team, but has a couple of things working against him. He's 30 years old, and he can't really do much of anything besides shoot. But boy, can he ever shoot. On three-pointers: 41% for his NBL(Australia/NZ league) club last year, 57%(!) in the D-League, and 37% for the New Zealand national team in the World Championship this past summer. The very definition of "gunner", he was the 2009 NBL MVP, and finished second only to Scola in scoring at the Worlds this summer.

Granted, those last two guys may not even be on the Spurs active roster on opening night, but at this point, they both have a chance to prove themselves worthy. Still, these are the guys that we can reasonably expect to be designated shooters when they step onto the floor for the Spurs.

The Tiny-eared Elephant in the Room

One thing this post does not address is the likelihood of Richard Jefferson's 3-point percentage regressing to the mean. Even though he only clocked in at 31.8% last year, RJ shot 36% or better in each of his previous 3 seasons, and shoots 3's at a 35% clip for his career. Despite that, I am hesitant to believe that RJ will rediscover his stroke, mainly because his shot looks so awkward. If he returns to his previous form, the Spurs will be a brutally efficient offensive machine, because teams will have to play him closer, enabling him to get a step on his defender more often on cuts to the basket. Basically, if RJ gets his shot back, he will be an absolute nightmare to defend against. Even if he doesn't return to old form, though, this team seems to have enough shooting to make up for it.

There's also the distinct possibility that Garrett Temple or even Tony Parker could have a breakout season from beyond the arc, but that's probably a bit overly optimistic.

So, there you have it. The Spurs addressed their need for better shooting this offseason, and did so in a big way. Now, about that defense...